Leo Melamed Is ‘Man of the Futures’ 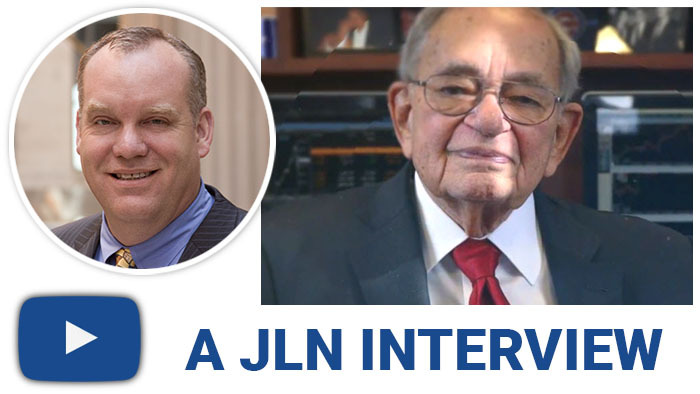 The Latest Autobiographical Installment By a Futures Market Legend

Leo Melamed has lived a life worthy of multiple autobiographies. And he now has written his latest, “Man of the Futures.” The book encompasses all that occurred in his life and work since 1996, when he published “Escape to the Futures.” A lot has happened in that quarter of a century, and many of Melamed’s dreams and the predictions he made have been realized.

The biggest prediction Melamed addresses in his book is about electronic trading and Globex. Globex was launched in 1992 and it was not until the years 2002 to 2004 that it really became viable, Melamed said.

There is a more robust understanding of the things he did that he did not write about before. And now, with hindsight, his work and many of his ideas can be examined more thoroughly.

“In 1996, there was no way to tell how the futures markets would evolve,” he told me.

The autobiography he published in 1996 was about events that had happened prior to that year. He also covers some of this in his new book, including his escape with his family from the clutches of the Nazis during the beginning of World War II.

One can’t read the story of his escape without being overwhelmed by sadness. Leaving the world you know, traveling across the frozen tundra of Siberia and over the seas to Japan is one thing. But losing all your friends and your family who did not run for freedom from the Nazis is another. They were all killed, he writes.

The sadness I felt after reading this early story of his life was intentional, Melamed said. He wrote it that way to honor the lives of his family and friends who perished.

He talked about reliving the feeling he had when he was nine and the Nazis were searching his home and pushing around his mother, who all the time during the two hours they were there held his hand.

Despite the sadness of the Nazi-era stories, the hardest part of the book to write was about the stock market crash of 1987 when the New York Stock Exchange tried to blame the derivatives markets for the crash, he said. There was an attempt to pass a bill in Congress that would have given the SEC authority over the CFTC and raised stock index margins to 50%. There were indications there was a majority to pass the bill in committee.

“If we had lost that battle with New York, I don’t think we would be here today talking about this,” he told me.

He credits the victory for Chicago to the unheralded work of the late Illinois Congressman Dan Rostenkowski, a prominent and powerful Democratic Party leader.

He said another hard part to write was about his friend Jack Sandner, who Melamed didn’t know would be dead when the book was published. Sandner died in 2021.

After the stock market crash, Melamed created a blue-ribbon panel that needed to be as “pure as the driven snow,” he said. Sandner wanted to be on the panel, but Melamed said he knew Sandner had an investment in a broker group that had been a focus of the investigation into the causes of the crash. Sandner told Melamed he did not have an investment in the broker group, which was a lie that would emerge later. Melamed previously wrote about this episode in “”Escape to the Futures.”

His most favorite memory, which we highlighted in our short clip video, was being invited to give a speech in Russia by Soviet President Mikhail Gorbachev. Growing up in Poland among staunch anti-communists and delivering a “capitalistic” speech in the shadows of the Kremlin was the very best experience, he said.

Helping Gorbachev save the Soviet Union by helping introduce free markets was his most enjoyable experience.

Melamed had a hard time as a young person processing the U.S. hatred of the Japanese after December 7, 1941, based on his experience in Japan with people who were friendly and civilized. Melamed’s life had been saved by a Japanese consul general in Lithuania, Chiune Sugihara, who gave travel visas to the Melamed family and other Jews fleeing Europe during the Holocaust despite being told not to by his superiors in Japan.

For his work initiating financial markets worldwide, his outstanding contribution to Japan-U.S. relations and his recognition of Consul General Chiune Sugihara’s life-saving deeds during World War II, Melamed was honored by the Japanese government with the Order of the Rising Sun, Gold and Silver star. The award is equivalent to the U.S. Presidential Medal of Freedom.

He shared that he has not traded bitcoin and does not expect to. He said he does not understand it.

The next book on his agenda is a sequel to “The Tenth Planet,” a science fiction novel he penned. The sequel, titled “Cousins,” was built into the first book and will feature aliens. The aliens are coming. Given the success Melamed has had initiating financial futures around the world, and with Globex, I predict the aliens will be active traders.