Warning: trim() expects at least 1 parameter, 0 given in /home/customer/www/johnlothiannews.com/public_html/wp-content/themes/Divi/includes/builder/functions.php on line 12283
 A Smile on FTSE Russell’s Sean Smith's Face is Not News, But This Smile is Special | John Lothian News
(312) 203-5515 johnlothian@johnlothian.com
0 Items

A Smile on FTSE Russell’s Sean Smith’s Face is Not News, But This Smile is Special 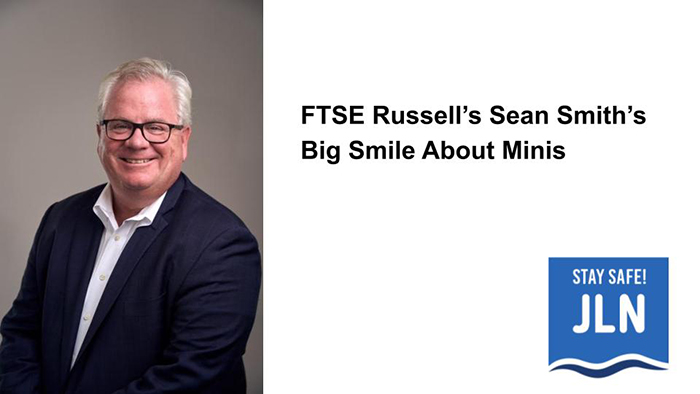 Sean Smith has a big smile on his face these days. Actually, that is not news, though it is harder to see behind a mask. Sean is normally always smiling. However, his smile is even bigger presently because of a new product announcement by Cboe Global Markets, one of the key partners for Smith’s employer, FTSE Russell.

The Cboe announced last week plans to launch Russell 2000 mini options. This new product incorporates many of the elements of Smith’s career into one small package with huge potential. I spoke with Smith, managing director of derivatives licensing for FTSE Russell, on Friday about the new mini Russell 2000 options.

The Cboe is going to start offering Mini Russell 2000 options in the first quarter of 2021, subject to regulatory review. The contracts are worth 1/10 of the size of the index and about the same notional value as the Russell 2000 ETF options. This latest mini offering is meant to hit the sweet spot of customer demand to help them invest, trade or manage their risk with greater precision.

Smith is a former O’Connor & Associates trader who has had a couple of tours of duty at the CME Group and has seen numerous trading trends, innovations and fads over the years. He was at the Chicago Mercantile Exchange as a local trader when the S&P split and the e-mini S&P was introduced. He helped manage the transition of CME traders from the floor to the screen. At FTSE Russell, he is a senior leader of the team at the index giant that manages the relationships across exchanges for the extensive portfolio of FTSE Russell index products and their derivatives that trade on the Cboe, CME, SGX, ICE and more.

He has watched with amazement during this current investing environment in which many of the trends he has seen and participated in over his career have converged to create the most dynamic and empowered trading climate of his lifetime.

Electronic trading has enabled investors and traders to directly engage in today’s markets, with many newer traders using an app on their phone to make trades. Information is readily available, with individual investors in many cases having the same access to the same market moving information as hedge fund traders in our social media driven markets.

The current U.S. President or anyone wanting to communicate directly with the world can tweet and be seen by anyone with a Twitter account and a phone, tablet or computer. And individual traders are able to communicate with each other as never before using apps, video conferencing and other tools.

These mini or micro products allow traders and investors of all sizes to more precisely trade or manage their risk. As JLN’s Matt Raebel said in The Spread this week, the new mini Russell options are good for traders who want to use a scalpel rather than a sledge hammer to trade.

What really gets Smith excited about these new mini Russell options, though, is how well the Russell 2000 index is performing at present. Since the beginning of November, the Russell 2000 has outperformed the entire equity market. Small capitalized stocks are on fire since the vaccine for COVID-19 has become a reality and U.S. lawmakers sound more committed to providing fiscal help for the pandemic-depressed economy.

Smith said what will really be fun in 2021, with the Russell 2000 currently trading at about the 1975.00 level, is that it will be trading at 2000 points with a bit more of a rally. FTSE Russell recently published a study on how well the Russell 2000 performs in the three months after a new administration takes power in the U.S., and I can tell you it is generally up.

The mini contracts and the ability to trade in fractions of shares has attracted a whole new generation of traders. The ability to start with a lower amount of capital in the equity markets has broadened the pool of traders there.

Being able to trade contracts with smaller notional values is not new. It is the reasoning behind stock splits, to make stocks more affordable. The S&P 500 used to have a $500 multiplier. In 1997, the multiplier was reduced by half to $250 and the e-mini S&P futures were introduced at one fifth the size of the #250 multiplier, or one tenth of the original $500 multiplier.

Equities prices have risen substantially since 1997, which helped bring forward the e-micro contracts at the CME Group, the most successful contract introduction in the exchange’s history.

I believe that the introduction of digital assets has had a role in this fractional revolution as well, since bitcoin can be broken down into 100 million pieces, each a Satoshi.

Fractional shares, micro futures, more mini options and even an exchange that named itself the Small Exchange are part of the trend that has swelled the number of market participants.

The pandemic has helped this trend too, as more people are at home in front of computers and have more time on their hands with no commutes.

The improvement in trading technology, where phone trading apps are doing to the markets what the ipod did for music, is making trading easy, portable and popular. Rather than having 10,000 songs in your pocket anywhere you go with your iPod, you now have 10,000 or more trading instruments available anywhere you go.

Of course, volatility in the markets and a growing awareness of the opportunities in the markets have also played a role in broadening market participation. Part of that awareness, Smith says, has come from the expanding education exchanges like the Cboe and CME Group are doing.

“Education is an enabler,” Smith told me. He also said we need to do even more education.

I agree. I have been pushing for more education in the futures space specifically for too many years to remember.

Smith has great respect for the market. He was trained right by the people at O’Connor & Associates. He is always cheery when I catch up with him, but these new mini Russell 2000 options and the current trading environment have brought an even bigger smile to his face.