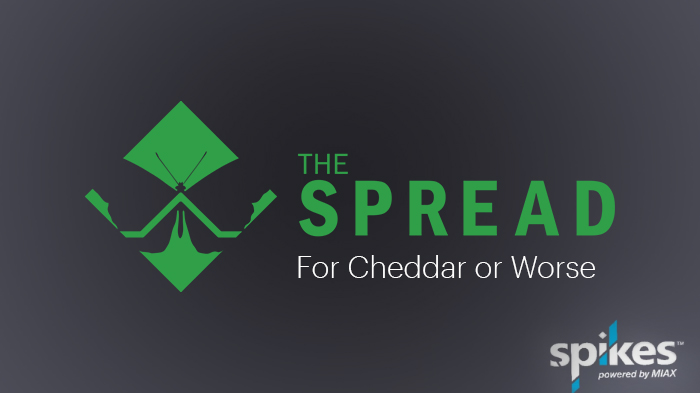 The Spread – For Cheddar or Worse
JohnLothianNews.com

This week on The Spread: MIAX scores another legal win, Nasdaq raises fees to pay for upgrades they hope will give them a competitive edge, and the CME Group gets cheesy with new options and futures contracts.

Big Bets in Asia on Fed Have Traders Guessing Who’s Paying
Stephen Spratt – Bloomberg
The eurodollar options market, where investors bet on U.S. interest rates, is typically quiet during Asian trading hours. The lack of liquidity hasn’t stopped the building of huge positions in recent weeks. A series of block trades, similar in size and structure, has led to speculation that at least one investor is betting big that the Federal Reserve will cut rates only once more, at most, in this cycle. The hedge for just one transaction last week was equivalent to more than four times the average daily volume for September contracts in the region.
/bloom.bg/2qsw32X

Stocks Are Writing Checks the Economic Data Can’t Cash
Robert Burgess – Bloomberg
Unlike the bond market, which is largely anchored in economic reality, the stock market is based on hope. Everyone knows and understands that, but it’s still next to impossible to reconcile the latest leg higher in equities — which has pushed the Dow Jones Industrial Average, S&P 500 Index and Nasdaq Composite Index to records — with the latest economic data.
/bloom.bg/2QtiD1e

Alarm sounds over heavy short selling of junk bond ETFs
David Tuckwell – Financial Times
Junk bond exchange traded funds are being short sold in bulk. Almost 40 per cent of the US’s biggest junk bond ETFs available for borrowing are on loan to short sellers, according to data from FIS Astec Analytics, far more than for other kinds of ETF.
Such short selling has raised alarm about the quality of the funds’ holdings. It has also prompted the question of whether junk bond ETFs have design flaws that could wreak havoc if market conditions deteriorate.
/on.ft.com/2NUtPSK

Managers Optimize Fee Negotiation Structures to Align with Pricing Philosophy
John D’Antona Jr. – Trader’s Magazine
During the past three years, the growth of institutional assets under management (AUM) in passively managed strategies has outpaced those of actively managed options, which is indicative of institutions’ desire to cut costs by paying lower management fees. This has led to many active managers experiencing extensive fee compression. In response, asset managers have implemented several strategies, including fee negotiation and internal pricing structure optimization, according to new research from Cerulli Associates.
bit.ly/2QwDrVw

Dollar Stifled by a Growing List of Reasons to Take on More Risk
Michael Hunter – Bloomberg
It doesn’t look good for the dollar. For one, Morgan Stanley sees a glut looming, while Standard Chartered Plc says the growing U.S. monetary base will undercut the greenback.
There’s a rising tide of supply as the Federal Reserve pumps dollars into bank funding markets in the wake of September’s upheaval. That has the potential to dent the yield advantage that U.S. markets offer just at the time when a change of management at the European Central Bank could draw a line under monetary easing in the region that’s home to the world’s second-biggest currency.
/bloom.bg/2Om12pe

FIA welcomes plan to extend UK CCP temporary equivalence
FIA.org
FIA welcomes the statement from European Commission Vice President Valdis Dombrovskis today proposing to renew the time-limited equivalence decision for UK CCPs. As set out in the joint trade associations letter to the Commission published on Tuesday, without an extension beyond the current expiry date of 30 March 2020, EU clearing members would not be able to continue as direct members of UK CCPs in the event of a no-deal Brexit, and EU counterparties would not be able to clear derivatives subject to the clearing obligation on those CCPs.
bit.ly/35aSPuT

Eurex Clearing clears first EURSTR swap trades
Eurex
Eurex Clearing, one of the leading central counterparties (CCPs) globally and part of Deutsche Börse Group, has cleared its first EURSTR swap trades. The clearing of these euro-denominated swaps is an important milestone in both the establishment of EURSTR as the new benchmark risk-free rate, and in expanding Eurex’s EUR-denominated product offering. BNP Paribas, Citi, Deutsche Bank, J.P. Morgan, LBBW, Morgan Stanley, Nordea and UniCredit were the first to trade EURSTR swaps cleared at Eurex Clearing. Along with a number of other banks they will continue to provide liquidity and price transparency via Bloomberg and Tradeweb’s execution platforms.
bit.ly/2NWab8U

Crypto Derivatives: A Corner of the Market or the Market Itself?
Emmanuel Goh – Coindesk
The race is on.
One business day before the much-awaited ICE/Bakkt launch, the CME announced it would be listing bitcoin options in Q1 2020. ICE returned the favor by announcing it would also be launching options contracts but in December this year.
Why are two of the largest exchanges in the world competing so openly for a space that was considered, until recently, as secondary by most industry insiders?
bit.ly/33Y6Lbl

EU set to offer derivatives industry extra year to prepare for Brexit
Philip Stafford – Financial Times
Brussels is expected to grant the derivatives trading industry an extra year to prepare for a no-deal Brexit by prolonging existing emergency access for European institutions to crucial UK market infrastructure.
Valdis Dombrovskis, vice-president of the European Commission, said on Friday that contingency plans for accessing UK-based clearing houses would have to be extended beyond the current March 2020 end date because the EU financial services industry would not have alternatives in place in time.
/on.ft.com/2NUTgUh

Traders Q&A: Magnus Almqvist, Aquis Technologies
John D’Antona Jr. – Trader’s Magazine
How to best use it. How to create it. How to refine, etc. But one thing for sure is that exchange technology is modernizing at a rapid clip. Of course, it has to. It has to adapt and grow up to be smart enough to provide low latency, high-performance flexible technology for the brightest, smartest fintech companies now entering the market. Also, it has to do this while providing robust and reliable technology that existing successful exchanges require — a tall order, especially given the years existing legacy systems have been in place.
bit.ly/37ghwrv

Trading Up: Dugan Joins Nyse Options
John D’Antona – MarketsMedia
Meaghan Dugan joined the New York Stock Exchange as Head of Product and Competitive Strategy for NYSE Options. Dugan was most recently Head of Derivatives Product Management for the U.S. options and global futures businesses for Bank of America Merrill Lynch. She was also previously a Vice President at Morgan Stanley in roles across Automated Options Market Making, as a Lead Market Maker/Specialist, and within the Electronic Trading team developing new product and Institutional order flow.
bit.ly/2QshZ3U

Hedge funds see diminishing returns in Trump’s tweets
Tom Teodorczuk – Financial News
On May 30, US President Donald Trump declared a new trade policy on Twitter. “On June 10th, the United States will impose a 5% Tariff on all goods coming into our Country from Mexico, until such time as illegal migrants coming through Mexico, and into our Country, STOP,” Trump tweeted.
bit.ly/37h2mCE