Buy the Sharks, Sell the Bait 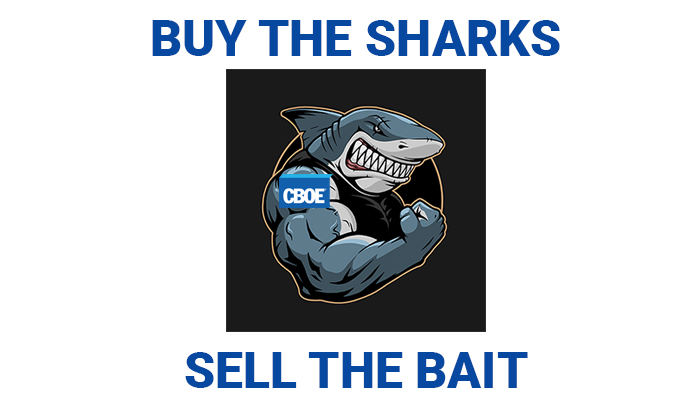 Cboe and its CEO Are Now in a Different Boat

In January of 2014, after hearing CBOE executives crow at an annual Chicago press lunch about how great their publicly traded company and its products performed in 2013, I wrote a commentary titled “The CME Should Buy the CBOE Soon.” There have been many on and off discussions about just that for many years. And yesterday for just a short period of time it seemed like it was happening, as the Financial Times reported that CME Group had approached Cboe to acquire it in a $16 billion deal that CME Group later strongly denied.

The premise of my 2014 story was that the premium in the CBOE’s stock at the time reflected a takeover premium. The CBOE had a new, inexperienced CEO (hello Ed!) running the company who could easily be moved aside by a deal. However, I warned that the CME had better act fast before Ed Tilly could get his feet wet and lead the CBOE to become a shark rather than bait.

Well, Ed Tilly and Cboe Global Markets have become sharks. And he has a school of aggressive, flesh-eating, highly-competitive colleagues working behind him at Cboe on his staff. And they keep adding to that team and depth of bench and brainpower with each new deal they close.

Rather than buy the Cboe because it is bait, the reason the CME would now buy the Cboe is because Cboe are sharks, led by the chief great white shark himself, Ed Tilly.

Buying the Cboe could give CME Group some new senior management, with Tilly taking over for CME Chairman & CEO Terry Duffy as CEO. Duffy is 61 or 62 (I am not sure when his birthday is) and Tilly is 56. A deal like this would be a perfect legacy for Duffy and leave the Chicago exchange community united under one company and the CME Group in good hands.

If the CME bought the Cboe, Duffy would be hard pressed to navigate the world of the SEC, something the CME has tried to avoid like the plague over the years. The closest they have allowed their markets to get near the SEC is their OneChicago deal from the early 2000s and elements of their more recent NEX deal.

Tilly, mentored by former CME and CBOE executive Bill Brodsky, is steeped in how to navigate the SEC and FINRA and has worked with the CFTC on the Cboe’s VIX futures and their now mothballed bitcoin futures. Tilly and his team have moved from Cboe software to Bats software seamlessly, so they have proven they can do large scale integrations.

Meanwhile, the lieutenants who helped Duffy integrate the CBOT and NYMEX into the CME Group, people like Bryan Durkin, Phupinder Gill and Kim Taylor, are all gone. So are Jamie Parisi, the former CFO, and Craig Donohue, the former CEO of the CME Group. However, Parisi is a Cboe Global Markets board member and Donohue is the executive chairman of the OCC, an institution of which the CBOE is a 40% shareholder. Thus, there would be familiar faces in the margins of this deal.

Not that there are not able executives at the CME now, but their industry and public presence has been more muted since Duffy was elevated to the CEO role, or so it seems to me.

Options people have always had the reputation of being smarter than futures traders or executives. Maybe it is the math skills of options traders versus the cajones it takes to trade futures, but that has always been the perception if not the reality. Thus, if you are buying a major options business, you’d better have some good equity option industry experienced senior management and board members.

What a deal for the Cboe also does for the CME is get them into the retail equities and options trading business, where the volume increases have been driven by meme investing and zero commissions for stock trades.

As I noted in 2014, some of CME’s volume comes from the Cboe’s S&P 500 index options, or SPX. The CBOE gained the right to list the S&P 500 options originally because it was a cash index and the CME wanted nothing to do with the SEC.

It would not be until CBOE hired Brodsky at the exchange in 1982 that they would start to add options contracts to complement their futures contracts.

And I am not sure since Brodsky left in 1997 that they have had anyone in senior management or on their board with as extensive options knowledge as Brodsky.

Thus, if the CME is going to buy the Cboe, they are going to need to bring in the management team too to run the businesses of both exchange companies. They need Ed Tilly and his team and their equity options business and SEC and CFTC expertise.

They also need the equity options industry experience and independence of the Cboe’s board of directors. Tilly is not going to want to deal with Duffy’s board. He is going to want some of his own board members, which is highly independent. And the CME board does not need more deal bloat. Cboe has 14 board members, including Tilly. CME Group board has been trimmed down to 21 members, including Duffy. Cboe does have former Bats CEO Joe Ratterman on the board, but also former CME CFO Parisi, former CBOT CIO William M. Farrow, III and former CFTC Commissioner Jill Sommers, a one time CME employee.

Thus, a Cboe deal for the CME could not only be a changing of the guard at the top of the management hill at the CME, but if it happens should also see big changes to the board overseeing it.

The CME Wednesday strongly denied there is a deal. Whoever fed the information to the FT had some very specific numbers, which CME shareholders did not like, as the alleged acquirer’s stock fell and the Cboe’s shares initially raced higher. However, after the denials, shares of both firms were down and the market seemed to believe the CME’s denial.

Like any big deal these days, or in the past, there are antitrust issues to overcome to complete a deal like this. The CME proved it could overcome those concerns when they bought the CBOT and NYMEX. Maybe the unknowns of the Biden administration’s more aggressive antitrust policy posture are a factor preventing a deal like this.

But these firms compete on a global scale, something Cboe has expanded with the recent deal to buy Chi-X Asia and open an Amsterdam derivatives exchange. Thus, I think the CME and Cboe could overcome the risk of being poster children for a more aggressive Biden antitrust policy.

There are lots of reasons why I think this deal would be a bad idea, not including its potential impact on my own business. But there are some good reasons to try to make a deal like this and it starts with buying the Cboe sharks.