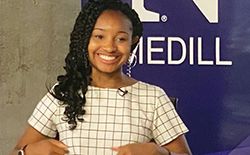 It is my pleasure to announce that Alexandria Perry has joined John Lothian News as an intern and on-camera talent for the options-centric video series The Spread. Alex comes to JLN from the Medill School of Journalism, where she just graduated with a masters degree in journalism.

Initially, she will exclusively contribute to The Spread and options-related news for JLN.

Alex is a talented broadcast journalist equipped with the skills to help us further develop this video series and help attract new viewers to JLN.

Suzanne Cosgrove, JLN’s deputy managing editor and producer of The Spread, will hand over on-camera appearances to Perry beginning next week, while continuing to oversee the series.

Suzanne has been handling the on-camera element of The Spread despite not wanting to appear on air. But she saw the need and her dedication to getting the job done well won out.

Alex will be featured in this week’s Term of the Week, which is “intern!”

Demand for protection falls as investors bet US stock sell-off is over
Eric Platt and Joe Rennison – Financial Times
Investors in the US stock market are wagering that the worst of the recent sell-off is over, despite persistent risks that have already knocked $2.5tn off the value of US equities since early September.
Measures of demand for options that offer protection if the market were to lurch dramatically lower have receded steadily in recent weeks. This signals that investors are no longer clamouring to hedge themselves from a further slide. It also indicates that they are taking profits on the derivatives they had bought to insulate themselves from declines in the stock market, according to traders and strategists.
/on.ft.com/3uSUXFH

Depressed investor sentiment amid recent volatility is flashing a contrarian signal pointing to more upside ahead for the stock market
Matthew Fox – Markets Insider
Stocks have historically climbed a wall of worry. And from rising inflation to a US debt ceiling showdown, right now there is no shortage of worry weighing on investors.
That’s why there could be more upside left in the stock market, as the absence of euphoric sentiment among investors flashes a buy signal for contrarians.
/bit.ly/3uUj8U2

Barclays Rethinks Macro Trading Desks for Less Volatile Times
Stefania Spezzati and Harry Wilson – Bloomberg
Barclays Plc is considering shaking up parts of its global markets unit that are underperforming as the lender prepares for volatility drying up after the pandemic, according to people familiar with the matter.
Global markets head C.S. Venkatakrishnan, known to colleagues as Venkat, told employees recently that while equities and credit trading had held up well lately, parts of its macro trading unit including European interest rates were struggling.
/bloom.bg/3oKF4ju

Texas Hedge Fund Sees 155% Gain on U.S. Power, Gas Bets
Naureen S Malik – Bloomberg
A small Austin, Texas-based hedge fund has gained about 155% this year trading natural gas and electricity on a long-term outlook that the energy transition will create volatility and periodic supply crunches.
E360 Power LLC, which manages about about $200 million in assets, climbed almost 62% last month, and growth for the first nine months of this year was nearly triple what it was for all of 2020, the fund said in a letter to investors.
/bloom.bg/3DkMaiM

Should energy’s ‘lonely rally’ in September worry the stock-market bulls?
Christine Idzelis – MarketWatch
U.S. stocks have been on a bumpy ride higher in 2021, but energy’s “lonely rally” in September isn’t a sign of the market peaking despite some investor jitters, according to analysts at JPMorgan Chase & Co.
“Last month the energy sector rose over 9% in a declining market and was the only sector up in the S&P 500 index,” the analysts said Thursday in a J.P. Morgan research note on U.S. equity strategy. The S&P 500 fell almost 5% in September, its first monthly drop since January, according to FactSet data.
/on.mktw.net/3Aps1WT

Clearing will determine if Brexit self-harm goes both ways; A negotiation that largely ignored financial services has given way to an unhappy stalemate
Helen Thomas – FT
The UK knows well that the political ideology of Brexit can trump both economics and plain old common sense. What is less familiar is to see this phenomenon so clearly across the waters of the Channel. As Britain battles supply chain problems in everything from petrol to poultry, Europe is facing its own sovereignty versus sanity trade-off — in the rather less consumer-facing world of derivatives clearing, where a Brexit negotiation that largely ignored the City and financial services has given way to an unhappy stalemate.
/on.ft.com/309VUhB

September 2021 monthly figures at Eurex
Eurex
Aside from European equity index derivatives that stayed virtually flat with negative growth of 3 percent, all other derivatives trading segments at Eurex showed good growth in September. European equity derivatives led the way with growth of 43 percent – from 20.9 million traded contracts in September 2020 to 29.9 million this year – while European interest rate derivates grew by 20 percent from 53.6 million to 64.6 million traded contracts.
/bit.ly/2YtvlTF

FLASH FRIDAY: Innovation Is a Competitive Advantage For U.S. Stock Exchanges
Anna Lyudvig – Traders Magazine
FLASH FRIDAY is a weekly content series looking at the past, present and future of capital markets trading and technology. FLASH FRIDAY is sponsored by Instinet, a Nomura company.
In 1998, Traders featured an article on the eight U.S. stock exchanges. Fast-forward 23 years and there are 16 exchanges competing for order flow — five owned by NYSE, four owned by Cboe Global Markets, three by Nasdaq, one by IEX, as well as LTSE, MEMX and MIAX PEARL.
The last three exchanges launched in Q3 2020: the Long-Term Stock Exchange (LTSE), the Members Exchange (MEMX) and the Miami Pearl Equities Exchange, with each of the three having a different focus.
/bit.ly/3BqTzg2

Binance to Close Down Derivatives Services for South African Users
Jordan Lyanchev – CryptoPotato
Binance continues to close down some of its services in certain regions, with the latest country being South Africa.
Binance users based in South Africa will have until January 6th next year to manually close their derivatives positions as the exchange is halting these services. This is the latest action by the world’s leading crypto trading platform in its efforts to comply with local regulators.
As announced earlier on October 8th, Binance has alerted its South African customers that it will cease offering any derivatives services. More precisely, those are trading of futures, options, margin, and leveraged tokens.
/bit.ly/3uS4eO8

Premia Launches Volatility Surface Oracle
Cryptonewsz
Premia, the next-gen options AMM, announced the launch of the all-new Volatility Oracle by the employment of Chainlink nodes. The Premia platform is known for introducing capital efficiency and peer-to-pool trading opportunities to the DeFi market. The Volatility Oracle will bring the Premia data of options volatility on-chain, making it available for the entire DeFi market. Through the launch, Premia will be able to broadcast the wide range of volatility data to the development teams of decentralized finance, individual DeFi developers, and DAO.The Volatility Surface Oracle shall provide risk markets with new opportunities of granular token volatility data, options, and more.
/bit.ly/3mAgKOP

Stocks Worldwide Will Rise Through Next Year Despite Volatility
Jacob Sonenshine – Barron’s
The global stock market has recently been on a wild ride, which may persist for the short-term. For those investing for a year or more into the future, buying now could still result in solid gains.
/bit.ly/303DChT

Volatility: Turning A Lemon Into Lemonade With VXX
Seeking Alpha
How to capitalize on stock market volatility, particularly through options trades involving the VIX and VXX.
VIX, mean reversion and how to profit from it.
VXX is a long-term “lemon” but we can profit from it.
Recently I authored two articles (here and here) on high-probability trading of VIX … the volatility index. I recommend to those readers that haven’t read these articles to do so and those that have, consider re-reading as a refresher.
Now, when I speak of a high probability trade it isn’t in the common vernacular sense, but, rather in the statistical sense. It centers around demonstrable evidence that VIX “reverts to the mean” and that the “mean” is around VIX=20.
/bit.ly/3mynGvS

Virtu Financial Congratulates Rosalind Li, Recipient of the Rising Star Award from Women in Derivatives
Virtu Financial, LLC
Virtu Financial, Inc. (NASDAQ: VIRT) a leading provider of financial services and products that leverages cutting edge technology to deliver innovative, transparent trading solutions to our clients and liquidity to the global markets, announced that Rosalind Li, an options quant trader, has won the Women in Derivatives 2021 Rising Star award.
Based in New York, Rosalind joined Virtu in 2014 as an intern before transitioning to a full-time hire in 2015. She has gone on to earn a reputation for tackling complicated queries and writing code relating to the Virtu’s market making option strategies-an area of significant and strategic organic growth for the firm.
/yhoo.it/3uUGAk3

Observations & Insight The FIA reported late Friday that global exchange-traded derivatives volume and open interest both posted their highest levels on record in September. A total of 5.6 billion futures and options traded last month, with options volume once...

Observations & Insight Women In Listed Derivatives (WILD) is currently accepting applications from members for the WILD Board of Directors. The application process will close on November 8th. The group is looking for board member candidates who believe in its...