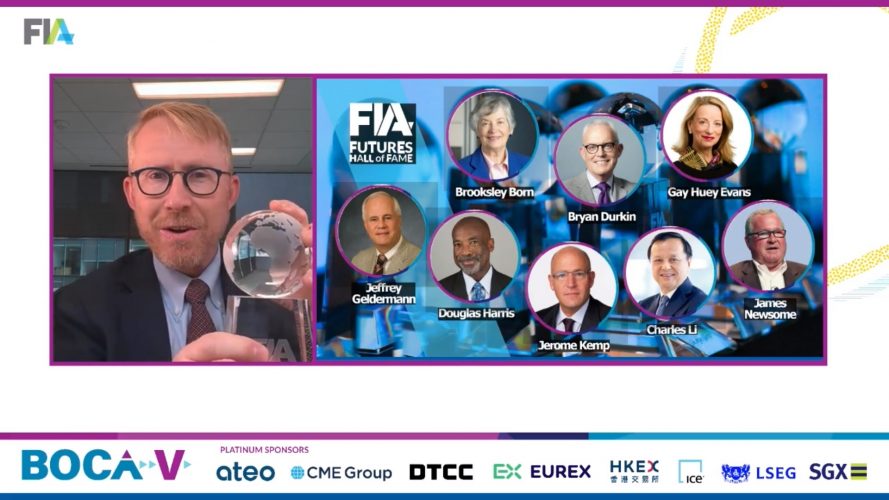 *****CORRECTION: Douglas Harris became general counsel of JPMorgan Futures when it was created in 1982. Harris helped organize the new entity after joining JPM in 1979.

Lukken explained that the Futures Industry Hall of Fame was established in 2005 to commemorate the FIA’s 50th anniversary and to recognize outstanding individuals whose lifelong contributions helped make the futures industry what it is. Since then, the FIA has inducted over 150 people into the Hall of Fame, including former Chicago Board of Trade Chairman Patrick H. Arbor (inducted in 2007), former Speaker of the U.S. House of Representatives John Boehner (inducted in 2016), and former Chicago Mercantile Exchange Chairman John F. “Jack” Sandner (inducted in 2007).

Lukken said that FIA has designed a display honoring all Futures Industry Hall of Fame members at FIA’s headquarters in Washington, D.C., “as a constant reminder to us of the men and women who built this industry.”

Before honoring the inductees, Lukken took a moment to acknowledge the passing of a Hall of Fame member, Jack Sandner, who died last week. “Jack was a true pioneer in our industry, having been at the helm of the CME during the launch of the Eurodollar contract, the S&P 500 contract, and Globex…we will miss him dearly. Rest in peace, friend.”

The ceremony continued with a video featuring each of the eight inductees into the Futures Industry Hall of Fame for 2021.

The nominees included:
— Brooksley Born, former CFTC chairwoman and co-founder of the ABA Women’s Caucus;
— Bryan Durkin, a member of the CME Group’s board of directors, as well as the CME’s former president, chief commercial officer, and chief operating officer;
— Gay Huey Evans, chairman of the London Metal Exchange, board member of Standard Charter, ConocoPhillips, IHS Markit, and HM Treasury;
— Jeffrey Geldermann, co-founder of GMI Software;
— Douglas Harris, senior advisor at the Promontory Financial Group, and one of the first black general counsels to work at an FCM, taking the job at JPMorgan Futures in 1988;
— Jerome Kemp, former head of futures, clearing, and collateral at Citi;
— Charles Li, former chief executive of Hong Kong Exchanges and Clearing;
— and James Newsome, founding partner at the Delta Strategy Group and former chairman and commissioner at the CFTC.

All were recognized for outstanding contributions to the futures industry and the financial markets over the course of their lifetimes.

“Congratulations to the 2021 Hall of Fame class,” Lukken said. “These are amazing individuals and role models for all of us, and we stand on the shoulders of these giants.”

Since Lukken was broadcasting virtually, the usual privilege of handing out the physical awards onstage wasn’t possible. Lukken held up one of the awards for those watching to see, chuckling as he attempted to get it in-frame. He said this year’s inductees will be back in Boca next year, so they can be honored in-person when the 2022 inductees are honored.

Before signing off, Lukken added, “We look forward to seeing you next year in South Florida, when we can all be together again.”