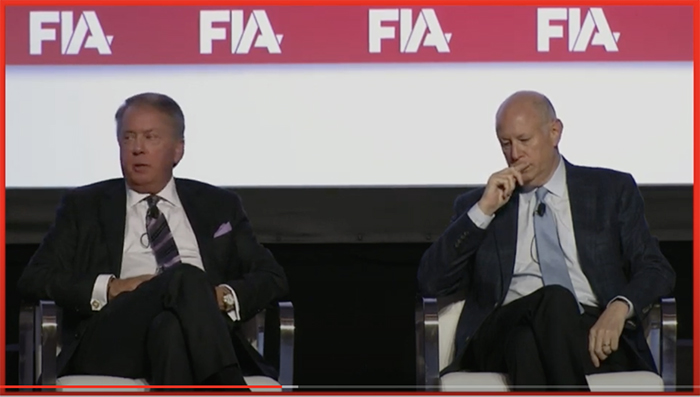 “Out of a crisis comes innovation,” noted the moderator of a Wednesday FIA exchange leader panel, Jacqueline Mesa, who also is FIA chief operating officer and senior vice president of global policy.

“Work from home,” answered Sprecher, who added that the trend made its way into the financial services industry quickly. “Communications within our own organization,” said Tilly, adding that the frequency of communications stepped up, and technology advances allowed for the change.

Terry Duffy said his first priority was to make sure family and colleagues were safe, but then the period offered businesses a unique opportunity to think differently about what the future will look like.

Mesa also asked the trio to weigh in on Brexit — particularly its potential impact on clearing in the next couple of years.

“My company’s position for listed derivatives is that they are going to be just fine,” Sprecher said. Duffy, meanwhile, said CME Group “is not relying on any [one] segment of the world. And Tilly, reflecting on the tear of acquisitions Cboe has made in the last 18 months, said its PanEuropean clearing house, EuroCCP,  offers  investors an advantage, and “allows us to be more efficient.”

The conversation heated up when the subject turned to cryptocurrencies, with Duffy pointing out dryly that Cboe should comment, as it was first to offer bitcoin futures, a product the exchange later abandoned.

“We thought the crypto ecosystem would have evolved quicker,” Tilly responded defensively, adding that Cboe’s recent acquisition of ErixX, a digital asset spot and derivatives markets,”was an ideal solution” to the subsequent absence of a Cboe crypto offering.

“I have no bitcoin in my portfolio,” offered Sprecher, adding that his wife “was in government, so I have to keep it plain vanilla,” a reference to former U.S. Senator Kelly Loeffler that got a laugh from the audience. Loeffer was for a time also the CEO of Bakkt, a digital assets custody service originated by ICE.

Sprecher also tackled the idea of controversial event contracts, including markets that have sprung up around predictions for certain economic reports, which sparked debate over how different the products were from gambling. “The CFTC is now being asked, ‘is this a bet or is it an economic indicator,’” Sprecher said. As an aside, he added it might be more interesting to speculate on how many deliveries Tesla will make in a certain period than on what its stock performance is likely to be at a point in the future.

In December 2020, nearly a year before being acquired by Cboe, ErisX filed for self-certification of three financially settled contracts it called “RSBIX NFL Futures Contracts,” which it structured as a futures contract for each sports event outcome. ErisX withdrew the proposal in 2021.

“The interest [in event contracts] is there,“ Tilly said on Wednesday. The challenge is standardizing the contracts, and what that will mean, he added.