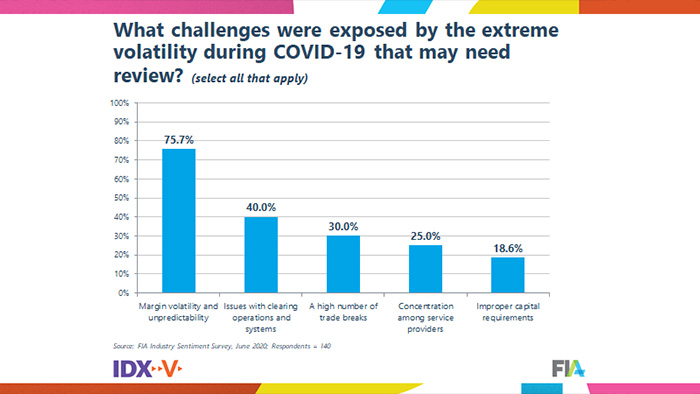 The global pandemic provided European markets with their first major test since the implementation of financial reforms that followed the 2008-2009 financial crisis, a challenge they met despite “stress on all of the markets, all of the time,” said Daniel Maguire, CEO of LCH Group and group director, post trade division, of LSEG.

While Maguire said he was not doing any “victory laps yet,” given the still-volatile environment, he added he was “standing relatively proud” of the systems’ performance.

Clearing was fundamentally more efficient than in periods prior to the reforms, Maguire said. “CCPs’ investment in scalability did pay dividends,” he said. “We didn’t skip a beat.”

In a Webcast conversation at IDX-V on Wednesday with Jackie Mesa, the FIA’s chief operating officer and senior vice president of global policy, Maguire and Hester Serafini, president of ICE Clear Europe, described “relentless” pressure on clearing systems as CCPs recorded sharp increases in volumes of exchange-cleared derivatives during the early months of the pandemic.

Mesa pointed out FIA research that showed that in the U.S., FCMs collected an additional $136 billion in collateral just in the month of March 2020, a total that reflected both futures and swaps.

Serafini agreed “there has been a lot of noise in the market about what was asked for by clearing” during the crisis. But she said most of the margin increases imposed by ICE Europe were on variation margins, which respond to changing levels of risk, not initial margins, which are funds required to establish a position.

If clearing members run stress tests on their portfolios, “that would give them a pretty clear indication” of expected margin increases, she added.

“Clearing houses need to have flexibility to react to the situation at hand,” Serafini said. “I would caution the industry about being too prescriptive.”