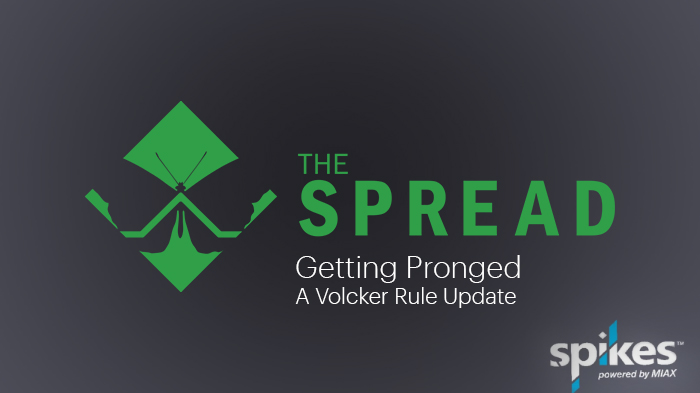 The Spread – Getting Pronged: A Volcker Rule Update

In this episode of “The Spread,” we take a look at the importance of fly fishing, legal lingo and Twitter risk.

For Baffled Wall Street, Trump Markets ‘Weirder’ Than ’08 Crisis
Sarah Ponczek and Vildana Hajric – Bloomberg (SUBSCRIPTION)
Donald Trump’s trying to win a trade war, so don’t talk to him about 600 points in the Dow Jones Industrial Average. But for traders coping with the price impact of his tirades, it’s all they want to talk about.
Days like Friday are creating stress in the trenches. A decade ago, Max Gokhman was a 24-year-old at the center of the storm, buying and selling toxifying credit contracts at a hedge fund he founded. Now head of asset allocation at Pacific Life Fund Advisors, he says those days barely compare when it comes to the unpredictability he’s facing daily.
/bloom.bg/2U3RWjo
****JB: From the article, “‘I used to tell people trading credit derivatives through 2008 was crazy, but this is way weirder,’ said Gokhman. Back then, ‘the liquidity is what made it challenging to put on or take off your positions. Now every part of the market has its own idiosyncrasy, and at the top you have Trump, who can wreak havoc in really creative ways nobody’s thought of before.'”
****SD: I get the Trivium (not the metal band) newsletter which exclusively focuses on Chinese socio-political and economic developments. This was how this morning’s edition described the last few days: “Over the weekend at the G7 meetings in France, Trump said ‘yes’ when reporters asked if he was having second thoughts about his Friday tariff announcement – since it sent the US stock market slumping over 600 points. Then, right on cue, the White House put out a statement saying that Trump was decidedly not having second thoughts. Now it’s Monday, and we’re still rolling – Trump told reporters that Chinese officials are asking to get back to negotiations.”

Everyone Who Hates the Stock Market Is Feeling a Lot Smarter Now
Vildana Hajric and Elena Popina – Bloomberg (SUBSCRIPTION)
Ratio of put-call equity options highest since Dec. last week; Stocks sent into tailspin as U.S.-China trade tensions rise
U.S. stocks have hit 13 records this year and generated $5 trillion of wealth. They’ve stood up to sagging earnings, slowing growth and a surging dollar. The S&P 500 is headed for what could still easily be its best year in six. And yet, sit down with traders and fund managers, and what invariably comes pouring out is frustration.
/bloom.bg/2U3qSko

****SD: This article came out Friday afternoon – plenty has changed since it was published, I like it for context after today’s market action and the weekend’s trade/G7 developments.

UBS Explored European Banking Alliance
Deal talks in June never coalesced but show how far European lenders are willing to go to address a punishing banking environment
Jenny Strasburg – WSJ (SUBSCRIPTION)
Deutsche Bank AG and UBS Group AG this year explored ways to combine their businesses, including talks as recently as mid-June to form an unusual alliance of investment-banking operations, according to people familiar with the discussions.
/on.wsj.com/2ZsFr6b

****SD: I’m not gullible, I’m just ready to believe anything these days.

Judge’s Order Puts New CFTC Chairman in Unusual Position; Heath Tarbert and two other commissioners must answer questions about a provision in a settlement with Kraft Foods and Mondelez Global, judge says
Dylan Tokar – WSJ (SUBSCRIPTION)
A federal judge in Chicago has made an unusual demand of the new chairman of the Commodity Futures Trading Commission: Testify in front of—and perhaps be cross-examined by—lawyers for two companies that were recently penalized by the regulator.
/on.wsj.com/2ZjFxh0

Derivatives relief for FPIs
The Telegraph India
Foreign portfolio investors (FPI) will not have to pay the higher surcharge on gains arising from the transfer of derivatives — futures and options (F&O). However, this benefit will not be available to domestic investors. The finance ministry had on Friday announced a slew of measures to boost the economy, including a rollback of the enhanced super-rich tax on foreign equity investors announced in the budget.
bit.ly/2U2DYOM

Would ICE Really Buy Bloomberg?
Andrew Delaney – a-Teaminsight.com
The London Stock Exchange’s planned $27 billion acquisition of Refinitiv – the former Reuters – got us thinking: who’s left of the independent market data vendors, and who would buy them?
bit.ly/2ZipK27

****SD: This is a fun hypothetical exercise. Here’s the conclusion: “Controlled by Michael Bloomberg, the decision to sell would be relatively straightforward. And the short answer is: Michael’s gotta sell sometime. Like the rest of us, he ain’t getting any younger. His true passion seems to rest elsewhere; politics, yes, but philanthropy perhaps more. There is no dynasty to take over. So, will ICE really buy Bloomberg? The strong signals we are receiving here at A-Team HQ is that it will. Does it make sense? Yes, it appears to. How much? More than $27 billion.”

VAR lookbacks should shift dynamically, research suggests
Alexander Campbell – Risk.net (SUBSCRIPTION)
Calculating value-at-risk using historical data involves finding a way between two common pitfalls. If the window of historical data considered is too small, the result will be extremely volatile, as the dataset of daily data points will turn over rapidly. But if too long a lookback is used, the danger is it includes data that is no longer relevant, because it comes from a period in history that is too remote to be comparable to the present day.
bit.ly/2znDfy5

Commentary: Hedge survival – making it to the next crisis
Peter van Dooijeweert – Pensions and Investments
After 2018, investors may be forgiven for questioning tail strategies. Even with declines in more than 90% of asset classes that year, the Eurekahedge Tail Risk index finished with a 6% decline. Its sister index, the Eurekahedge Long Volatility index, mustered a mere 1% gain. This lackluster performance was realized despite 2018 being the most volatile year since 2011 in equities and, as Figure 1 shows, the realized volatility of 60/40 portfolios hitting the highest point since the financial crisis (nearly triple the average of 2017). With the dramatic reversal in markets in 2019, tail hedges have lost as much, or more, than they gained in the final quarter of last year. While that performance might be forgivable given the sharp recovery of markets, it raises the issue of sustainability of hedging and when to take some profits in the face of large equity moves.
bit.ly/2zscDvL

One top options trader says now is the perfect time to buy the market dip
Tyler Bailey – CNBC
After getting crushed Friday, the markets are moving higher on renewed hopes of a trade deal.
/cnb.cx/2ZBcoxu

Here’s How Traders Are Reacting to the Latest Trade-War Salvos
Cormac Mullen – Bloomberg (SUBSCRIPTION)
Another Monday after a weekend escalation in the ongoing U.S.-China trade war and markets are roiling.
These charts show how traders took the latest salvos in the intensifying trade battle between the world’s two-largest economies.
/bloom.bg/2U56Plp

A 2-Step Script for Trading Volatility
Todd Salamone – Schaeffer’s Investment Research
To say that President Donald Trump lost it Friday morning is an understatement, as he reacted to: 1) Fed Chair Jay Powell’s comments — inferring the president wants more rate cuts now — after the Federal Open Market Committee (FOMC) head addressed central bankers from around the world in Jackson Hole, Wyoming; and 2) China announcing tariffs of 5-10% on $75 billion in U.S. goods, at which point the president promised a response.
bit.ly/321yBSP

Stock Buybacks Aren’t Enhancing Returns Anymore
Sarah Ponczek – Bloomberg (SUBSCRIPTION)
Everyone’s got an opinion on buybacks, from executives and politicians to Twitter users. Now, in a year when it was once thought they’d reach $1 trillion, a louder voice is being heard: the market’s.
/bloom.bg/2zol63q

The great global bond rally has turned investors into traders; As coupons shrivel and investors rely on rising prices, bonds are becoming stock-like
Michael Mackenzie – Financial Times (SUBSCRIPTION)
August has once again delivered on its reputation for providing a profound market shock. And for once, the flightier areas of equities and currencies are not the culprits. Instead, the foundation blocks of global financial markets — safe and boring government bonds — have slumped to new record-low yields, many of them below zero.
/on.ft.com/2ZjygOe

Who Is Harry Markopolos’s Mystery GE Short Seller? No One Is Talking
Rick Clough – Bloomberg (SUBSCRIPTION)
Markopolos says it’s a midsize hedge fund based on East Coast; A lot could be riding on the short-selling firm’s identity
/bloom.bg/2NzHVt4

Fed: Out of Options
CME Group (VIDEO)
The Fed has failed to stoke inflation, which has been persistently low due to retiring baby boomers spending less and millennials loaded with student debt.
bit.ly/2zoJzp2