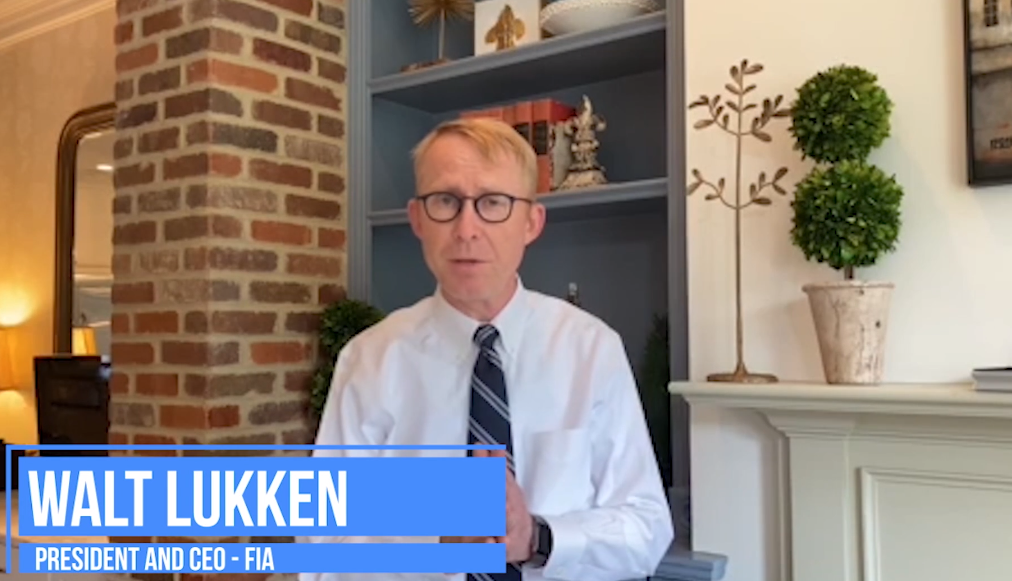 FIA President and CEO Walt Lukken invites you to attend IDX-V on June 23 to 25 in this video shot in his home and edited by John Lothian News.

Hedge Fund That Went Long the VIX in January Is Up 39% This Year
Aoyon Ashraf – Bloomberg
All it took for Formidable Asset Management LLC to beat the market in the first half was to get the effect of the coronavirus right. As a result, Formidable’s fund climbed 38.8% this year, gross of fees, beating most peers and significantly outperforming the broader market.
The Formidable fund, which correctly bet on what Covid-19 would bring, went long on VIX options in mid-January, reduced some equity exposure and bought put options on Nasdaq derivatives in early February, according to a letter seen by Bloomberg.
/bloom.bg/2BfUGoE

Infrastructure & Market Volatility: Unusual Times (Part 1)
Larry Tabb – TABB Forum
With the rise in record trading volumes and volatility during the COVID-19 market dislocation, Wall Street firms should be reviewing their infrastructure capabilities, especially if volumes and volatility remain at high levels.
It’s certainly a strange and uneasy time. Not only did COVID-19 force countries into lockdown, but also the combination of poor planning, uncertainty, economic shuttering, and trillions of U.S. dollars in global stimulus has markets roiling.
/bit.ly/30T4K1E

Inside Volatility Trading: June 16, 2020
Jermal Chandler – Cboe
On a recent Microsoft Teams call with my work teammates, I inquired about everyone’s weekend. The ask was not superficial, because I was curious to know if everyone ventured out as much as I had.
Until most recently when some states began easing their Stay-at-Home orders, it had become increasingly difficult to recall the days of the week by name. At times it felt as if days bled into weeks and months. That can happen when a global pandemic confines you to your house and general vicinity for months, but I digress.
/bit.ly/3fsvXw3

Second-wave wobble reveals more about markets than the virus
Mike Dolan – Reuters
It’s hard to find an investor who hadn’t already assumed some form of second wave of COVID-19 when economies reopen, so why did stock markets panic at the hint of a relapse last week? A sudden bout of angst about resurgent coronavirus cases in parts of the United States and China was enough to ensure last week was the worst for world equity markets since March.
/reut.rs/2USLk9n

Court deals blow to SEC in battle with exchanges over fees; Regulator has been seeking to push down costs for investors in US markets
Kadhim Shubber and Philip Stafford – FT
A US appeals court on Tuesday handed another legal win to the country’s biggest stock exchanges in their fight with their regulator, blocking a proposed experiment involving trading fees. The decision was the second court loss in a fortnight for the Securities and Exchange Commission, which in recent years has toughened its scrutiny of major stock exchanges and sought to push down costs for traders.
/on.ft.com/3d81wtq

The 32nd Annual Russell Index Reconstitution Explained
Cboe
FTSE Russell Indexes are reconstituted over a multi-week process in accordance to its benchmark methodology on an annual basis. The reconstitution reflects changes from the preceding year by adding and removing shares of companies to the U.S. Russell Indexes. Approximately 98% of the listed U.S. equity market is represented by the widely followed Russell 3000 Index which includes the subset benchmarks Russell 1000 Index (large-caps) and Russell 2000 Index (small-caps).
/bit.ly/3enVXZz

This Strategist Says The Worst Is Over For the Market. Here’s Where He Sees Promise.
Shaina Mishkin – Barron’s
As the U.S. economy recovers from the coronavirus pandemic, Wells Fargo strategist Chris Harvey addressed market volatility and the best-positioned sectors on a Monday call with Barron’s readers.
“Typically the first impact is generally the worst impact,” Harvey said during the Barron’s Live call. “We’re sticking to this belief that the worst is over, that we’re going to be able to mitigate it.”
/bit.ly/2C9h8A2

Maybe Someday These Fed Rescues Will Backfire
Mark Gongloff – Bloomberg
In times of crisis, you often hear warnings not to eat your seed corn to stay fed, or burn your furniture to stay warm, or some such. But what if you have an infinite supply of seed corn and/or furniture to spare?
The Federal Reserve is testing these limits lately, throwing everything into the market’s maw to keep it satisfied. Yesterday it broke out a new corporate-bond-buying plan that seemed entirely unnecessary, as Brian Chappatta wrote. The bond market has been doing just fine, thanks to the Fed’s earlier strenuous interventions. But the stock market has been less than fully exuberant this week, as coronavirus cases flare anew in the U.S., China and elsewhere. This may or may not have inspired the Fed’s intervention, but it sure feels as if Fed Chairman Jerome Powell just cut the ribbon on a shiny new market put, writes John Authers. Intentional or not, this may just make traders expect more rescuing the next time they get slightly out of sorts.
/bloom.bg/3e9g8KA

Beware as Wall Street Goes Direct to Consumer; Companies are increasingly issuing stock directly into the market. Individual investors should be on guard.
Charley Grant – WSJ
An unconventional Wall Street financing tool is increasing in popularity. Investors should make sure they aren’t on the wrong side of the cash machine. Hertz Global Holdings, HTZ 3.72% which has filed for chapter 11 bankruptcy protection, on Monday said it plans to sell as much as $500 million in stock through an at-the-market financing. In this type of deal, Hertz can instruct its banker to sell stock on a rolling basis at prevailing market prices. That differs from a traditional offering, where an investment bank will sell shares to blocks of institutional investors in one shot at a fixed price.
/on.wsj.com/2N8pRVn

Exchange traded funds in volatile markets; Understanding the disconnect between price & net asset value
Mark Heckert, Chief Product Officer, ICE Data Services
The ETF industry has blown away the growth expectations of its creators in the 1990s. While equities were the initial beneficiaries of investor appetite, bond ETF assets have surged since the 2008 financial crisis. Now bond ETFs – which give broad exposure to fixed income via a single exchange listed instrument – have highlighted challenges within the bond market structure.
/bit.ly/3fANfat

*****JJL: The latest paper from ICE, but with less bang than their WTI versus Brent one.