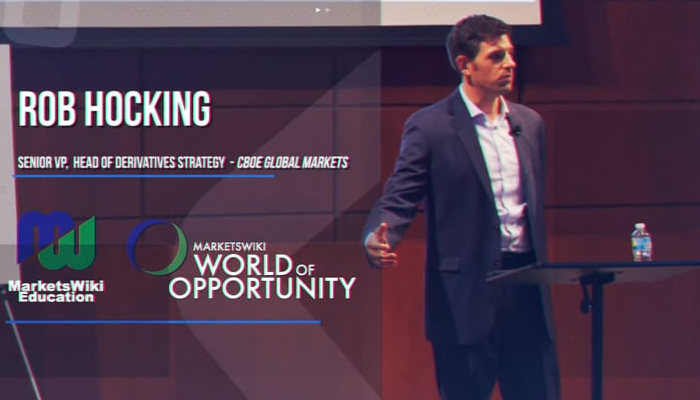 In this MarketsWiki Education video from our World of Opportunity event in Chicago, Rob Hocking, senior vice president, head of derivatives strategy at Cboe, explains what the VIX index is and how to manage risk using the VIX index and its related products, including VIX futures and options. In the complex options world, face to face negotiations between brokers and traders still take place, he says, and market makers still provide an important function.

Hedge funds are getting whacked in an ‘unheard of’ stock market shift — and a leaked Morgan Stanley memo warns of possible pain for months
Trista Kelley and Bradley Saacks – Business Insider (SUBSCRIPTION)
A massive shift in the stock market from top-performing growth stocks to lower performing names triggered a sharp shift in “momentum,” and is crushing hedge funds this week.
Goldman Sachs said in a note that the decline “ranks among the sharpest on record,” and Morgan Stanley sent a memo to hedge-fund clients, seen by Business Insider, trying to explain the moves and saying the pain could well keep going.
bit.ly/2LNLhpL

Carnage in Crowded Hedge Fund Stocks May Mean Some Don’t Survive
Lu Wang, Melissa Karsh and Sonali Basak – Bloomberg (SUBSCRIPTION)
Equity hedge funds are paying dearly for their devotion to industries like software and distaste for energy and commodity stocks. Wrong-way moves in positions they’ve crowded into, both long and short, could raise survival risk for some managers, one firm says.
“This unexpected, profit-sapping dislocation has definitely hurt the majority of clients,” said Mark Connors, global head of risk advisory at Credit Suisse. “Some managers may not make it through the month.”
/bloom.bg/2LPkV6R

HKEX vows to pursue London Stock Exchange deal, raising spectre of hostile takeover
Samuel Agini – Financial News (SUBSCRIPTION)
Hong Kong Exchanges and Clearing will continue its pursuit of the London Stock Exchange despite having its GBP31.6bn takeover bid rejected by the coveted UK bourse, according to people close to the deal.
Those people said the LSE’s actions now raise the prospect of a “hostile” takeover by HKEX, although the Asian stock market operator’s preference is to continue to engage in discussions and see the bid get a “fair hearing” by LSE management and other stakeholders.
bit.ly/30h41Ds

Former CFTC chair: HKEX-LSE deal would be a ‘great concern’ to Washington
Samuel Agini – Financial News
The former head of the US Commodity Futures Trading Commission says Washington would have “great concern” about a potential takeover of the London Stock Exchange Group by Hong Kong buyers.
The comments from Christopher Giancarlo, who chaired the US derivatives watchdog until July, add to early scepticism that Hong Kong Exchanges and Clearing’s shock bid for the iconic UK stock market would clear regulatory hurdles.
bit.ly/31kJkrB

ISDA Create to Add New Custody Function for Initial Margin
John D’Antona Jr. – Traders News
The International Swaps and Derivatives Association, Inc. (ISDA) and Linklaters have announced the addition of a new custody function on ISDA Create’s initial margin (IM) offering, which will enable users to complete all documentation required for regulatory IM on a single platform. BNY Mellon will be the first custodian to go live on the platform.
bit.ly/3092EGQ

Labour to Expand U.K.’s Financial Transaction Tax If Elected
Jess Shankleman – Bloomberg
The opposition Labour Party would seek to expand a tax on financial transactions if it is elected to government, according to the party’s Treasury spokesman John McDonnell.
The party accepts the broad principles of a report published Thursday calling for the tax to cover foreign-exchange transactions, interest-rate derivatives and commodities, McDonnell said. Specific details will be announced as part of Labour’s process for deciding its manifesto commitments.
/bloom.bg/31mKnXO

How to Leverage Social Media to Your Advantage
Cboe
As presidential candidates prepare to take the debate stage again tonight, we’re almost certain social media will be a buzz with “hot takes,” praise, criticism and conversation. We’ve seen how the president’s Tweets can impact our markets, but he’s not the only influential person using Twitter. Cboe realized the influence social media can have on our world and launched a social media-based strategy benchmark indexes to track it in 2016—a pivotal year in U.S. politics!
bit.ly/308VRgk

What’s Behind the Stock Market’s Great Rotation
Evie Liu – Barron’s
It must be a pretty dull week in the stock market if everyone is talking about factors.
Stock groups with different characteristics—so-called factors—had been running in very different directions over the past few months. The market’s best performers, known as high-momentum stocks, and the least volatile, known as low-vol stocks, had outperformed as investors shunned the cheapest, smaller, more-volatile ones. In July, the performance gap between the two sides was wider than at any point in market history, according to J.P. Morgan data, even surpassing the spread during the tech bubble in the late 1990s.
bit.ly/2LRZlyq

In ETFs, the rich aren’t getting much richer
Andrea Riquier – MarketWatch
The 20 biggest exchange-traded funds together hold $1.33 trillion in assets: 60% of a total category of $2.3 trillion.
But as analysts at Jefferies Equity Research point out, some of the biggest funds have seen outflows this year, while some small, niche products are picking up lots of interest.
/on.mktw.net/2M25nwT