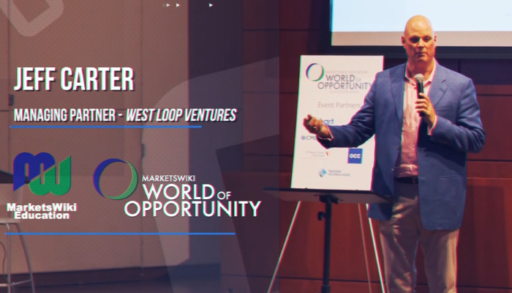 Want to know more about venture capital? Want to understand what the industry has to offer? Listen to Jeff Carter, managing partner with West Loop Ventures, in this video from MarketsWiki Education’s World Of Opportunity event in Chicago.

Hedge Funds Turn Most Bearish Since 2016, Hone Stock Bets
Lu Wang and Melissa Karsh – Bloomberg (SUBSCRIPTION)
As stocks whipsawed over the past week, hedge funds took a stance that’s hard to frame as bullish, intensifying bets against the market and limited long positions to a shrinking group of companies.
The ratio of hedge funds’ long to short positions, known as net leverage, sank to the lowest level since February 2016, data compiled by Morgan Stanley’s prime brokerage unit showed. At the same time, gross leverage, a gauge of risk appetite that adds up both long and short positions, remained above the 75th percentile since 2010.
/bloom.bg/2yNqxsn

A closely watched survey shows investors are the most bearish on stocks they’ve been all year
Carmen Reinicke – Markets Insider
A closely watched sentiment indicator is flashing a sign that investors are wary of where the stock market is headed.
The AAII Bull/Bear Ratio, maintained by the American Association of Individual Investors, plunged into negative territory this week, indicating that more investors expect stocks to decline over the next six months than expect a rise.
bit.ly/2yLPRPg

Don’t Bet on the Market’s 3% Drop Monday Being Its Last in 2019
Akane Otani – WSJ (SUBSCRIPTION)
Bad news for those hoping for calmer trading ahead: History shows that big one-day drops in the stock market are often followed by further sizable pullbacks.
Stock declines of 3% or more like Monday’s, while relatively infrequent, tend to occur in clusters when they happen, Instinet analyst Frank Cappelleri found in an analysis this week.
/on.wsj.com/2yUqn25

Investors dump risky assets as trade war flares
Richard Henderson and Colby Smith – Financial Times (SUBSCRIPTION)
Investors pulled tens of billions of dollars from equities and risky corporate debt over the past week, according to new data that reveals the extent of the flight to safety in the wake of the escalation of the US-China trade war and concerns about global growth.
/on.ft.com/2yUqJpr

There will be no winners in a currency war
Eswar Prasad – Financial Times (SUBSCRIPTION)
The trade wars fomented by the Trump administration are on the cusp of morphing into currency wars.
Currency devaluation might seem a useful element of the policy toolkit for economies suffering from slowing growth or, indeed, dealing with trade disputes, but it carries enormous risks for those countries themselves and for the world economy.
/on.ft.com/2YCdPM4

SEC proposes revamp of corporate disclosures
Kadhim Shubber – Financial Times (SUBSCRIPTION)
The Securities and Exchange Commission proposed a loosening of corporate disclosure requirements on Thursday in a move designed to reduce compliance costs for publicly traded companies.
The US securities regulator said it wanted to give executives more freedom to decide what to disclose to investors when describing their business. The regulator said the changes would “provide more flexibility to tailor disclosures to the unique circumstances” of each company.
/on.ft.com/2Yy0p3X

FIA Announces Don Byron, Head of Global Industry Operations & Execution
FIA
FIA President and CEO Walt Lukken today announced that Don Byron will be joining the association as Head of Global Industry Operations and Execution. This senior position will be responsible for developing and implementing industry solutions relating to clearing operations, execution technology, cybersecurity, and market structure issues and will be the principal FIA liaison with the Divisions and Committees representing these issue areas. He will be based in Chicago with global responsibilities.
bit.ly/2YIeRXj

Why everybody turned ‘end of the world bearish’ this week
Joe Fahmy – Yahoo Finance
There’s a consistent pattern that tends to occur with market sentiment and it happened again this week.
Here’s the pattern: The market has a nice uptrend that usually lasts 6-12 weeks. The rally usually stalls when the market and its leading stocks get a little too extended technically, and when bullishness increases based on many sentiment measures. We then see a decline until sentiment reaches extreme bearish levels or drops very suddenly. After stabilizing, the market tends to grind back up and embarrass all the people who reduced exposure, loaded up on put options, or turned “end of the world” bearish.
/yhoo.it/2yOCbD7

Metals And Vix are About to Pull a “CRAZY IVAN” – PART I
Chris Vermeulen – FX Empire
Our job as research analysts is to highlight what we believe is likely to happen and why we believe it is likely to happen. Therefore, without guessing as to the cause of the event, let’s focus on the “Crazy Ivan” event and how we can attempt to profit from it.
bit.ly/2yOnyzN

****JB: Points for using the term “Crazy Ivan” in a financial article.

Metals and VIX are About to Pull a “CRAZY IVAN” – PART II
Chris Vermeulen – FX Empire
Our research that highlighted this August 19, 2019 date and the potential for what we are calling the Crazy Ivan price move is rooted in our super-cycle analysis, predictive modeling tools, and other specialized proprietary price modeling solutions and utilities. We believe we’ve identified a key inflection point/date that will start what we are calling a “breakdown move” which will lead to the Crazy Ivan event throughout the globe.
bit.ly/2yR73mB

A $30 Billion Exodus Puts Hedge Funds for Masses to the Test
Nishant Kumar – Bloomberg (SUBSCRIPTION)
They’re the hedge funds for the masses, but now the masses want out.
Money pools that offer hedge-fund strategies usually reserved for sophisticated investors to regular folks are seeing an unprecedented flight of capital after several supposedly liquid funds ran into trouble in Europe. Investors have fled these so-called liquid alternative funds, pulling more than $30 billion in the first half, the most since the 2008 financial crisis, according to data provider Eurekahedge.
/bloom.bg/2yNm2xZ

The most important number in markets: Here’s why traders around the world have become obsessed with a daily dispatch from China
Ben Winck – Markets Insider
China shocked markets on Monday by allowing its currency to weaken past the key level of 7 yuan per US dollar for the first time since the 2008 financial crisis.
Many saw the move as retaliation for tariffs announced by President Donald Trump that are set to take effect September 1. Once instated, they’ll ensure nearly all US imports from China are taxed.
bit.ly/2yMzqSH