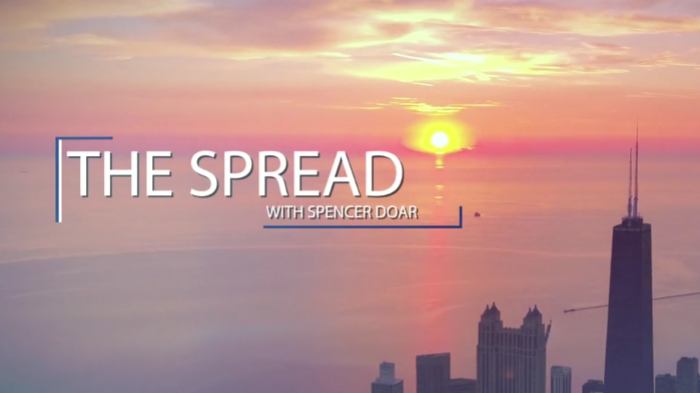 It appears Congress still has us little old options folks on the radar as the Options Market Stability Act is back in action! Also, JPMorgan has a Trump-related volatility measurement that we talk about in this week’s episode of “The Spread,” the last with Spencer Doar as host.

Head tax, LaSalle St. tax, vacancy tax on progressives’ checklist for Lightfoot
Crain’s Chicago Business
A coalition of progressive groups and a handful of aldermen are getting specific about increases to a bevy of taxes to fill Chicago’s budget hole, including restoring and increasing Chicago’s corporate head tax to $16 per month for large companies, instituting a 3.5% tax on office leases, a hike in the hotel tax from 4.5% to 7.5% and a local income tax on those earning above $100,000 a year.
bit.ly/302HOsI

****JB: I know not all of our readers are in Chicago, but enough of them are that I figured this was worth noting.

Investors Bet on Big Gains by Gold, Silver
Inyoung Hwang – WSJ (SUBSCRIPTION)
Options bets are signaling the precious-metals resurgence has much further to go, with traders making wagers that gold may rally an additional 40% and silver almost another 80%.
The most popular option on the SPDR Gold Trust exchange-traded fund, known as GLD, are tied to prices jumping 27% to $180 a share, according to options data provider TradeAlert.
/on.wsj.com/2kAMQhh

‘Zombie Libor’ Threatens Market’s Complacent View, JPMorgan Says
Alex Harris – Bloomberg (SUBSCRIPTION)
Beleaguered benchmark could exist after 2021 with fewer banks; ‘There is a substantial risk of much higher volatility’
Even though substantial progress has been made toward weaning the global financial system off of Libor, markets have undervalued the risk that a zombie version of the vital benchmark will continue on, according to JPMorgan Chase & Co. strategists.
/bloom.bg/31cJ9P0

What Recent Options Activity Suggests About Stock Market Volatility
Bloomberg (VIDEO)
In this edition of “Options Insight,” Bloomberg’s Greg Calderone takes a look at the fair value for the Chicago Board Options Exchange Volatility Index, the SPDR S&P 500 ETF Trust and what options markets are signaling about Federal Reserve monetary policy. He speaks with Bloomberg’s Abigail Doolittle on “Bloomberg Markets: The Close.”
/bloom.bg/2N6IEmf

Battle Erupts Between Traders, Exchanges Over Data Access Fees
Viren Vaghela and Silla Brush – Bloomberg (SUBSCRIPTION)
Trading venues have clubbed together to attack the latest European effort to curb what they charge clients for data.
The World Federation of Exchanges, which represents hundreds of trading venues including the London Stock Exchange Group Plc and Deutsche Boerse AG, said in a letter to European regulators that their data is a valuable tool for traders, despite complaints about high prices and aggressive sales tactics.
/bloom.bg/2A6HC0W

Crude Oil Declines After Trump Dumps Hawkish Aide John Bolton
Sheela Tobben and Joe Carroll – Bloomberg (SUBSCRIPTION)
Oil declined after President Donald Trump fired one of his most hawkish advisors.
Futures fell as much as 1% in New York on Tuesday after Trump announced via Twitter that National Security Advisor John Bolton was out. Bolton’s departure may calm concerns about any White House inclincations [sic] to use military might as a diplomatic tool amid escalating geopolitical tensions in the Middle East and Asia.
/bloom.bg/302Ldru

Cboe RMC Europe Day One Recap
Cboe
What’s Cboe RMC Without Some Volatility Talk?
Tim Edwards, managing director of Index Strategy for S&P Dow Jones Indices, kicked off the conference with a talk about volatility benchmarks, including the Cboe Volatility Index (VIX Index) and Cboe Skew Indexes. Edwards discussed what these indexes may tell investors about market expectations for day-to-day volatility, as well as tail risk. He highlighted the current low skew and higher VIX Index level environment and suggested the market may be more concerned about near-term volatility and less concerned about a major market event. He also charted the declining volatility premium over time, discussed possible causes and suggested that VIX Index levels may be reflective of liquidity concerns in the market.
bit.ly/2N6Kp2P

SGX reports market statistics for August 2019
SGX
Singapore Exchange (SGX) today released its market statistics for August 2019. Market participants continued to use SGX’s suite of risk-management tools to manage their positions across multiple asset classes as concerns over the outlook for both developed and emerging economies intensified. With ongoing US-China trade tensions, a yield-curve inversion in the US bond market – interpreted by some participants as a recession signal – as well as fresh uncertainties over Brexit, global growth concerns dominated the markets throughout August.
bit.ly/31aDZ5P

SEC Cites Broker Systems Complexity in Rule 606 Delay
Max Bowie – WatersTechnology (SUBSCRIPTION)
The US Securities and Exchange Commission (SEC) has bowed to pressure from industry bodies and delayed the compliance date for key reporting requirements of Rule 606 of Regulation NMS governing reporting of broker routing activity. The regulator says it is doing this to give brokers additional time to implement systems to track orders.
bit.ly/2N5GOC4

Technology Is Banks’ New Battleground
Rochelle Toplensky – WSJ (SUBSCRIPTION)
European banks are spending vast sums on technology—but it may not be enough to defend against the incursions of bigger, richer American rivals.
U.S. lenders already dominate investment banking in Europe. The big risk for the continent’s banks is that slicker tech could give their American rivals a platform to make gains in lending to companies—the Europeans’ traditional stronghold.
/on.wsj.com/319i3bm

TVIX: Stay Short Volatility – VelocityShares Daily 2x VIX Short-Term ETN (NASDAQ:TVIX)
Seeking Alpha
Over the last month, shares of the VelocityShares Daily 2x VIX Short-Term ETN (TVIX) have fallen by over 23% in a decline which accelerated in a 16% drop in the last 5 days. For long-term followers of the ETN, declines are largely to be expected due to the nature of its specific methodology; however, the magnitude of these declines has been fairly large in relation to history. It is my belief that going forward we will see further downside to the ETN but at a slower pace than what we are currently seeing.
bit.ly/2N8xFZg

Fed, ECB Meetings: Central Bankers Are Backed Into A Corner
Mark Gongloff – Bloomberg (SUBSCRIPTION)
Central bankers were once magical beings with seemingly limitless powers. Paul Volcker slew stagflation. Alan Greenspan ruled for nearly 20 years. Ben Bernanke prevented a second Great Depression.
Today’s central bankers are pale shadows. Federal Reserve Chairman Jerome Powell is constantly bullied by his boss. Worse, he and his counterparts in Europe face a weakening global economy armed with the equivalent of one of those guns that unfurls a flag with the word “Bang!” on it. But they must pull the trigger again and again, even if there’s a strong chance it either won’t help or will do actual harm, writes Mohamed El-Erian. Markets demand they act and throw terrifying tantrums if they don’t. Similar pressure comes from politicians — the same politicians who do nothing to support growth, when they’re not actively hurting it.
/bloom.bg/2N4xRJ7