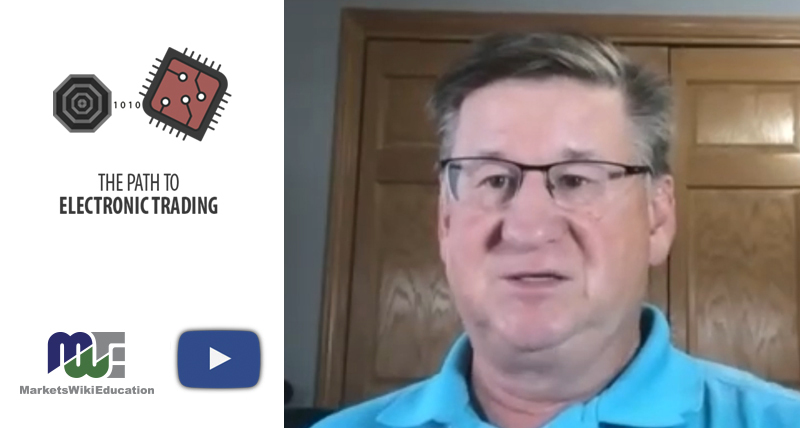 When Joe Panfil joined the Chicago Mercantile Exchange staff in 1997 as an information technology professional, the CME was still a member-owned, club-like organization focused on open outcry trading. However, the goal of making the CME the largest exchange in the world based on electronic trading was what attracted Panfil to the CME.

The CME had obtained the first generation of Globex from Reuters, but had just swapped the Clearing 21 software they developed with NYMEX to Marché à Terme International de France (MATIF) for the NSC-VF match engine at about the same time Panfil joined the exchange.

Panfil was interested in working for the CME, but what sold him was CME executive John Hart’s declaration that the goal was to make the CME the largest exchange in the world based on electronic trading. That was a big order in the nascent days of electronic trading, when the first Globex system was trading about 70,000 contracts a day, mostly in Eurodollars overnight.

Panfil was well versed in trading systems when, after graduating from Purdue University with an electrical engineering degree, he was hired by Rich Inc., a Wall Street technology firm providing banking and brokers with trading systems, quote monitors and more.

After the head of development at Rich left the firm, he recruited Panfil to work with him at the trading firm TradeLink.

At TradeLink, Panfil helped build out the network and the infrastructure for their traders to trade off the floor.

Later, while at First Options of Chicago, Panfil became intrigued with a job opportunity at the CME after a buddy interviewed with the CME for the job and said it was not for him.

Panfil and the CME team worked to optimize Globex and improve its speed. He said he remembers when they broke the 100 milliseconds mark for Globex 2, which was eventually rebranded simply “Globex.”

The CME was running Globex on Tandem computers, which cost about $1 million a piece, Panfil said. They moved from Sun Solaris to Redhat Linux as the operating system, slashing their costs.

Every time Tandem came out with new CPU units, the CME would replace the old ones on a Saturday in order to speed up the system. Then CME moved to a pub/sub model, or publishing subscribing model, that allowed them to use Linux servers rather than the Tandems.

CME moved from the Tandems to Linux server boxes, each hosting an individual contract or even a month of a contract. Each Linux box cost $40,000 and allowed the exchange to further increase its speed.

CME also worked to increase functionality. With each increase in speed or functionality, CME  was seeing a return in the form of more trading. Globex breaching 1 million contracts a day was such a milestone. Then other contracts started seeing more volume on Globex and there came a “crossover” day when Globex traded more volume than the trading floor. Globex assumed the lead in trading volume and never gave it up, Panfil said.

When the CME bought the rights to the TruExchange trading platform after the firm liquidated amid the tech crash of 2000, the exchange was able to move away from the MATIF NSC platform and to a version of Globex that was all its own. The CME would call this version of Globex Falcon and the MATIF version Eagle. Panfil did not recall where CME had obtained the new platform.

Because of the growing number of computers running Globex, CME needed to move their data centers from their headquarters on Wacker Drive. Globex had been housed on the 2nd floor of 20 South Wacker and on another floor in the other tower of the building. They were considering this before the 9/11 attack on the Word Trade Center in New York that housed the New York Board of Trade, but the attack reinforced the need for a separate location.

The exchange opened a data center in Lombard and a disaster recovery site at the Cermak Road data center in Chicago, the world’s largest data center. Then the CME bought a warehouse in Aurora, Illinois and built a large data center there. CME built their own electric substation for the site, as 95% of the electrical outages Commonwealth Edison of Illinois reported were from the substations to the customer, Panfil said.

Panfil said it was very important for the CME to have a level playing field for Globex, so each computer connected to the match engine computers had the same length of fiber optic cable spooled above.

Panfil talked about working under the different chief information officers at the CME: Bill Jenks, Scott Johnston, Jim Krause and Kevin Kometer. Each one brought his own strengths to the job, but Krause was Panfil’s favorite.

Today Panfil is the OCC’s executive director of technology operations, working along with several other former CME employees, and he remains proud of his work to help transform the CME into an electronic trading powerhouse.