An Analytical and Fundamental Response to the CFTC Interim Staff Report: Trading in NYMEX WTI Crude Oil Futures Contracts Leading up to, on, and Around April 20, 2020

On Tuesday, November 23, 2020, the CFTC released a report titled “Interim Staff Report: Trading in NYMEX WTI Crude Oil Futures Contract Leading up to, on, and around April 20, 2020,” regarding the negative Crude Oil prices on the penultimate trading day of the May 2020 contract. As shown by the adjacent chart, prices had been falling since late February, gapping down on March 9, (blue bar) on news that OPEC+ would not be cutting production soon and concerns about the loss of crude oil demand due to the Covid-19 pandemic. Then the price collapsed on April 20 (red bar). 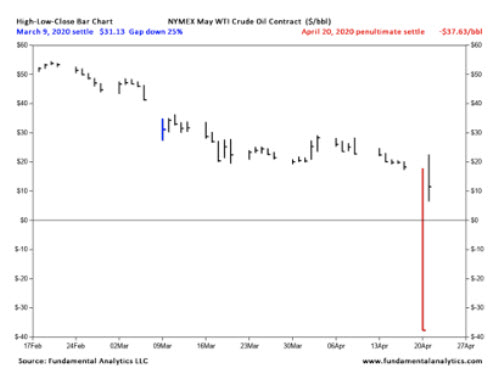 The Interim Staff Report discusses the factors affecting crude oil prices during this period: the COVID-19 pandemic, potential storage limits for crude oil, calendar price spreads, and open interest in the May contract.

According to the report, “In summary, a variety of factors coincided leading up to, on, and around April 20, when WTI Contract prices fell from $17.73 per barrel at the beginning of the trading session to finally settle at -$37.63 per barrel. An oversupplied global oil market faced an unprecedented reduction in demand due to COVID-19 slowdowns and shutdowns, and the uncertainty over supply, demand, and storage capacity coincided with price volatility in the WTI Contract, observed at historic levels that day.”

On Wednesday, November 24, 2020, Commissioner Dan M. Berkovitz issued a critique of the report saying, “Unfortunately, the Report does not provide the public with an adequate explanation of the extraordinary price collapse on April 20.” 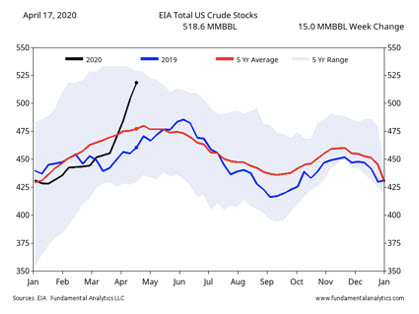 The next charts and a review of relevant quantitative data provide context for the period around the April 20 price collapse and respond to points made by the Interim Report and Commissioner Berkovitz’s critique.

For example, the above chart, using EIA data, shows the increasing amount of available crude oil in inventory.  Stocks are within the 5-year range, but the strong growth rate was counter-seasonal and concerning.

The report mentions the Cushing, OK stocks levels (the delivery point of the NYMEX WTI crude  contract) which are plotted with the chart below. Cushing can handle up to about 76 million barrels, but the rate of growth is a concern. 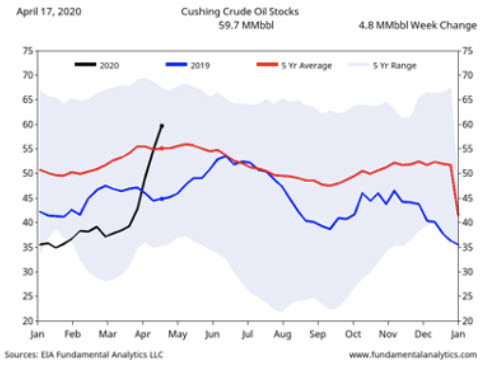 The report also mentions that Cushing, OK stocks levels were about 76% to capacity.  Adjusting the previous chart to percent of full capacity shows Cushing was never more than about 85% to full capacity during the last five years. 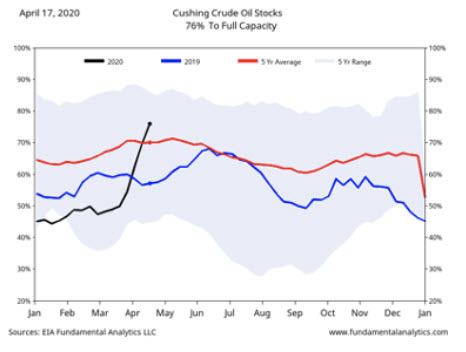 It is more revealing to consider the US demand for crude oil as measured by refinery Crude Runs and Crude Oil Days Forward Supply. 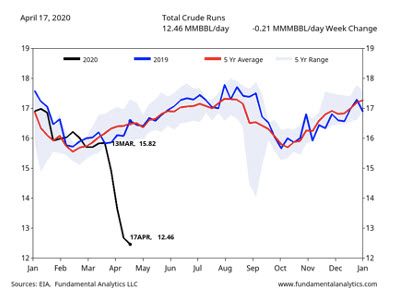 With the first major Covid-19 lockdown in mid-March in the US, the demand for petroleum products dramatically decreased. Correspondingly, the amount of crude oil needed to refine into gasoline, diesel fuel, etc., collapsed. Total US Crude Runs went from 15.8 million barrels per day in mid-March to 12.5 million barrels per day in four weeks, a -21% decrease in Crude Runs. 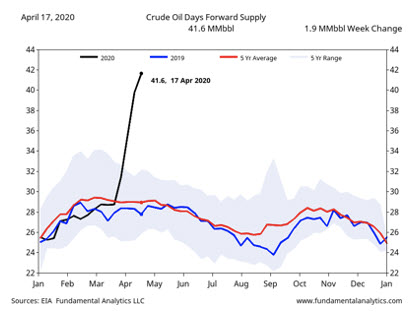 When Days Forward Supply (black line) data are plotted as a time series with crude oil prices (blue line), we see a strong inverse relationship between the direction of days forward supply and the direction of price. 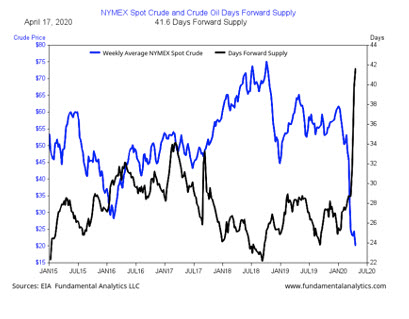 From the Refiner’s Perspective 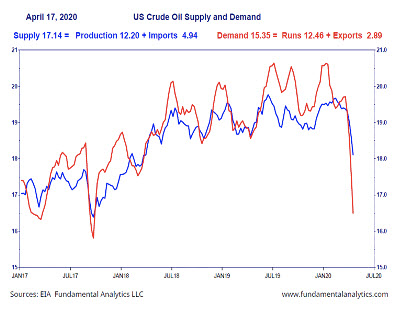 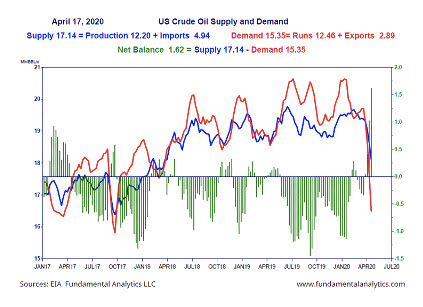 As before, when crude oil price is plotted against Net Balance, the inverse relation between the two is apparent. As prices fall, refiners use less crude, but production cannot quickly change, so there is a lag between crude oil needed and supply.  This, in turn, pressures prices to be even lower. 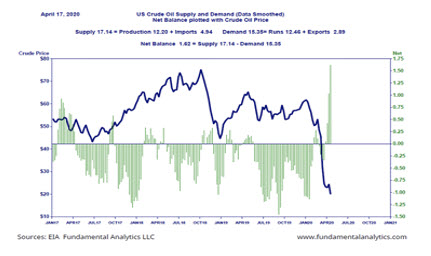 Because there is a lag between crude price changes and refiners’ response, a four-week lag in prices provides a stronger inverse relation between price and supply direction. 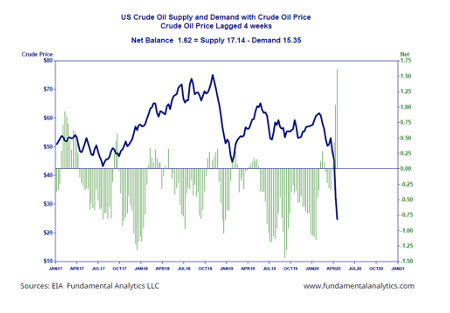 As mentioned above, crude prices had been declining since the start of the year from bearish supply/demand issues,  and they accelerated downward with the recognition of Covid-19 pandemic conditions.  By Friday, April 17, 2020 the May WTI Crude contract settled at $18.27, having dropped from $63.40 at the beginning of the year. 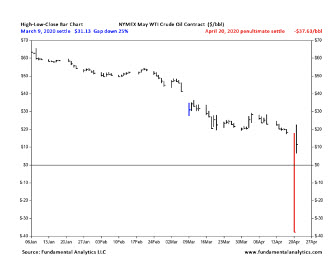 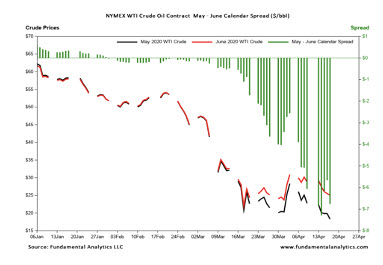 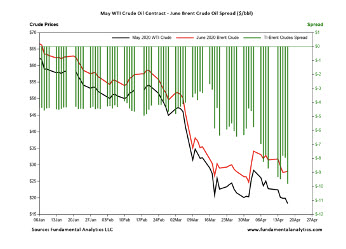 Open Interest in the May 2020 WTI Crude Contract

By the end of trading on Friday, April 17, open interest in the May 2020 WTI Contract was at 108,593 contracts, so this meant a lot of positions needed to close the next Monday, though the Interim Report stressed that over 80% of the open interest was in the deferred months.  The chart below has year-on-year comparisons of the May crude oil contract open interest.  As noted by the Interim Report, open interest had peaked at 634,727 contracts on April 2.  It had also peaked later than previous years, when the peak typically occurred about 20 days before expiration.  So this peaked higher and greater, resulting in the 108,593 contracts open April 17. 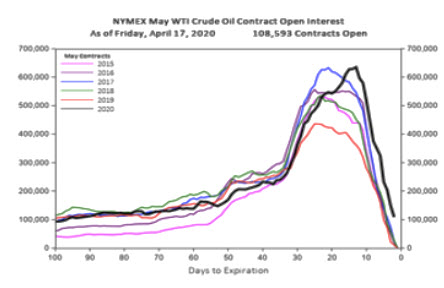 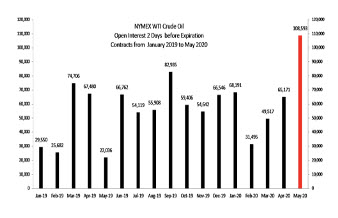 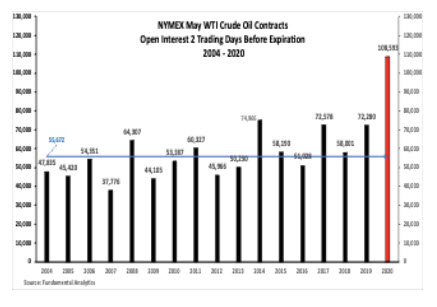 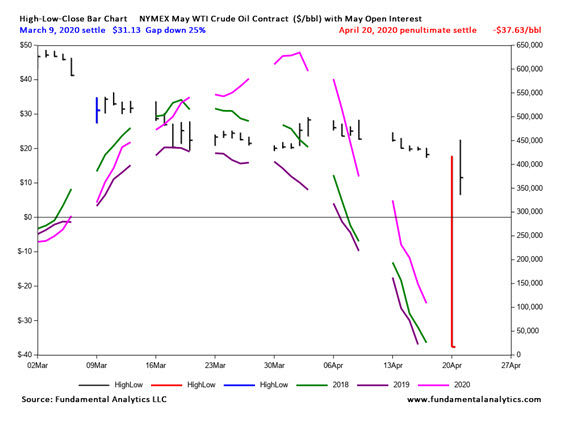 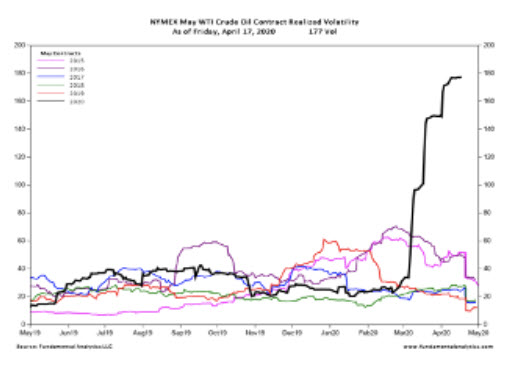 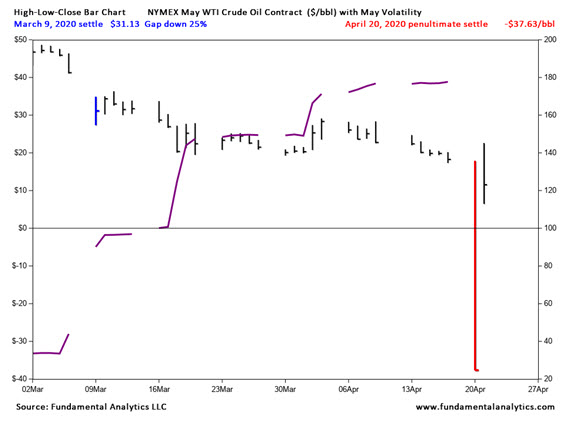 Reviewing the supply/demand and prices conditions leading up to the collapse of prices on Monday, April 20, 2020, it appears that the conditions were set by Friday, April 17, 2020 for a significant price move the following trading day.

Fundamental data, such as crude runs and crude oil days forward supply, were more useful indicators of the oversupply conditions leading up to the time of the price collapse.  Refiners could simply not use the crude supply available.  The structure of the crude forward curve was pressuring crude prices and was at extreme levels by the Friday before the penultimate Monday.  Open interest and volatility were at unusually high levels, indicating the potential for difficult buy/sell execution.  When the May 2020 open interest peaked late and at a new high, Thursday, April 2, that may have been a red flag for potential problems.  Margin rates were increased on Friday, April 17, but not by any significant amount, only an $800 increase from $6,700 to $7,500. It seems to have been too late to force out weak longs. Looking at the available data (open interest, realized vol, crude oil supply and storage), it appears that there was a missed opportunity by the regulators, exchanges and clearing houses to create awareness among market participants about the looming collapse of prices.