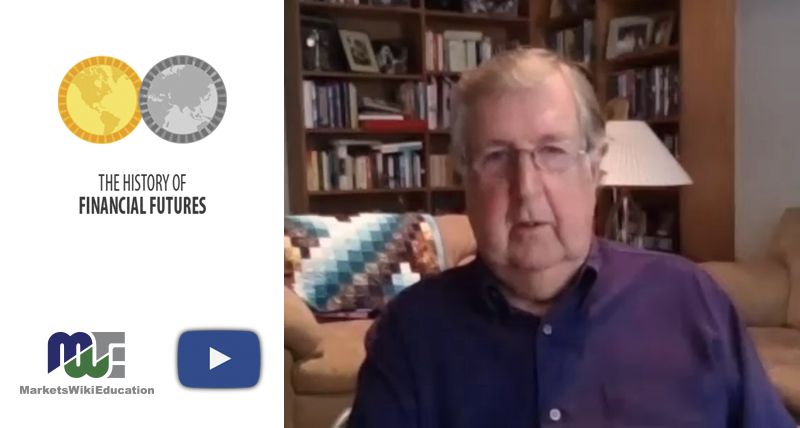 John McPartland joined Continental Bank in 1973 after leaving the Air Force. He worked two years in the internal audit department where he learned about secured financing. He was honing his understanding just as accounting standards for the futures industry were emerging and the CFTC was being created.

“The ideal candidate needed to know secured lending and accounting and I just happened to be at the right place at the right time,” McPartland says. McPartland had a succession of jobs until he started the futures subsidiary for Continental Bank.

In 1982, he went to work for Leo Melamed, at Dellsher Investment Company, as director of research. “Basically Scott Gordon was Mr. Inside and I was Mr. Outside,“ McPartland says. “What’s important to remember is that during that time I was a member of the exchange.”

There were four banks – First Chicago, Continental, Harris and Northern – and the banks all owned memberships on the Board of Trade and the CME.  Memberships have to be held in the name of an individual, so it was the relationship bankers who actually held the memberships. The CME  insisted that all of the settlement bankers serve on the clearinghouse committee. And by virtue of that, the CME hoped over time that they would understand how the clearing process worked and get comfortable with it.

The International Money Market (IMM) was very small at the time. McPartland’s marching orders from the top were to find out what was happening. He was management’s eyes and ears.

“We want you to go over there.  Get involved. Find out what these guys are doing. And if they are a bunch of crooks, we want to know sooner rather than later,” McPartland says. “But if they’re on to something, if this IMM thing is going to work, we have all the resources of the Continental Bank that we can throw at them to help them foster the organization.”

In 1972, the IMM started on the Chicago Mercantile Exchange at its 110 N. Franklin St. address, which was a particularly small trading floor. It traded pork bellies and cattle. And the IMM wanted to trade about eight currencies. And it was decided that they were going to trade 12 contract months for each of the currencies.

The opening day for the IMM, for the currencies, McPartland says the floor manager told Leo Melamed and Barry Lind: ‘ “Well, we don’t have that many whiteboards. You know, we actually can’t list currencies for 12 months. … Lind said, “Well then just do March, June, September and December,”’ recalls McPartland. As a result, the third Wednesday of March, June, September, and December, to this day are known as IMM days, when literally billions, if not trillions, of dollars of financial contracts mature.

Two things came about. First, Continental was the delivery bank agent for maturing futures contracts and early on there wasn’t much money involved. McPartland’s first total delivery was a total of $53 million. That would be a single transaction today. Second, Leo Melamed referred to the concept of a Class B clearing member, a class B arbitrage firm.

After a while, the IMM started getting some decent volume, the market eventually grew, the open interest growth volume grew and the size of the deliveries grew. Another important thing happened: Paul Volcker became the chairman of the Federal Reserve and interest rates went very high, with the prime rate peaking at 21.5%. The value of overnight money became substantial. This led to a new way of settling transactions vs. an older complicated way via 300 baud telex machines.

In 1976, Continental, Milt Stern and McPartland developed what was the first delivery vs. payment of foreign exchange. It was not instantaneous, but it was much improved from the old system. Implementation was not simple. It was an iterative process, trying to get the 30 clearing members and their customers to do it properly.

Continental Bank was the only agent when delivery fees rose to $1 per contract, and as the deliveries rose to $4 billion or  $5 billion contracts, those fees were actually a fair amount of money. The IMM started to look attractive because it was an established exchange; the process was established; the behavior modification with the clearing members was established; and the member’s customers were established.

Still it was a complex system that is not easy to describe. In one memorable case, McPartland had to describe the IMM system to the FBI to capture a fraudulent Canadian trader whose scheme could have pulled down the entire exchange had it gone through. McPartland was a 29-year-old junior banker when he had to stand 16 feet away from the vice chairman of the eighth largest bank in the world, and tell him, “Look, we have a problem,” McPartland says. But his bid paid off and he was given the authority to go to Canada on behalf of the CME and negotiate an agreement with a bank there so the criminal could be stopped and caught.

“I remember telling the CME board that the good news is there’s only about six human beings in the world that know the weakness of the system, and they’re either the bank or CME,” McPartland says. “But there have always been misses in the clearing space and in being a commercial banker to the industry back in what I will call the wild, wild west days.”