Leo Melamed Looks Back and Forward in Fireside Chat 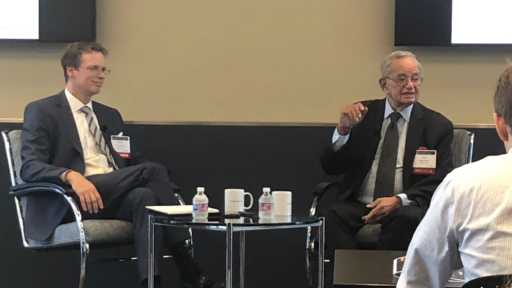 Leo Melamed, who fell in love with the trading pits back in the 1960s, says “You can’t stop technology” and that anyone who tries to stop it or slow its pace will lose.  He was referring, in part, to the “speed bumps” currently being introduced into the markets, first from IEX and most recently from ICE.

Melamed talked about this and a number of other recent developments in the futures industry at a “fireside chat” last night with Matthew Kluchenek, a partner at Mayer Brown, which hosted the event for the Futures & Derivatives Law Committee of the Chicago Bar Association.

Melamed loves technology despite the fact that electronification of the futures industry was the “hardest thing [he] had ever accomplished.”

When he first started as a runner at the CME, “automation was the furthest thing from anyone’s mind in the arcane futures industry,” he said.  It took a while for him to realize that digitization of the futures markets was inevitable. In 1976 he wrote an article for the Hofstra Law Review in which he maintained that electronification of futures “would never happen.”

“Ten years later I admitted I was dead wrong,” he said.

In pressing for electronification, he became the “Darth Vader” of the industry for a while. “It took ten years to convince the world” that this was the way to go, he said.

Melamed still “loves” free markets and competition and believes that it “expands the universe” – not surprising, as Milton Friedman, the Nobel Prize winning economist who contributed greatly to the “Chicago School” of economics, was his mentor and good friend. However, he praised the CFTC, saying he would “give them a very high grade” and quoted Friedman as saying “There has to be a policeman,” monitoring the markets.

When Melamed helped launch financial futures in 1972 he and others knew it would have to be regulated and thought it would be better to build a regulatory authority themselves rather than have an outside regulator – thus the CFTC was born. Financial futures need to be cash settled instead of physically delivered, and the CFTC “made that kosher,” Melamed said. He said that Brooksley Born, the CFTC Chair in 2000 who, alone of just about anyone in the industry at the time, thought the CFTC should control the swaps market, “was onto something,” although her timing was off.

Asked for his thoughts about spoofing being criminalized, Melamed called it “ridiculous” and said making spoofing a crime would likely scare people away from the markets rather than lend the markets more credibility.  “It’s a market strategy! As long as you’re at risk…it isn’t criminal,” he said.

Although admitting that cryptocurrency is currently “sexy,” he said it was a “big question mark” to him. “Is it real or was it invented by Al Capone’s third cousin to launder money?” he asked rhetorically.

Myron Scholes, the co-originator of the Black-Scholes options pricing model, didn’t think much of crypto either, Melamed said.  When asked his opinion of cryptocurrency, Myron Scholes said ‘Are you crazy?’ according to Melamed. “Scholes said he would resign from the advisory committee I had asked him to join if we launched bitcoin futures at the CME,” Melamed said. “We were the first to launch bitcoin futures, and he resigned.”

Melamed was asked a question that no doubt everyone in the trading world would like an answer to: “Why do some futures contracts succeed and others fail?”

“You must study a lot before you launch a new market,” he said. “There are 12 rules you have to satisfy, but that’s not enough. There is a rule 13. Unfortunately, no one knows what that rule is.”

Sometimes a failed contract is a case of a simple thing being neglected, such as a once upon a time cattle contract that called for more cattle than the trucks could carry. Occasionally, too, there is a case in which “people don’t want an open market” in a particular contract. They want to control it, he said.

The eurodollar contract, whose launch he led, became “the most successful market ever,” one reason being that it acted as a hedge for Libor. Asked whether SOFR would replace Libor, he said he thought Libor should have been fixed rather than eliminated and that the “huge manipulation – worse than Ponzi or Madoff” which took place there was not the fault of Libor itself.

The most important new technology, the internet, has “democratized the world,” Melamed said. “The world is shrinking by the day. Before the internet, people in the third world didn’t have enough knowledge to compete. Two to three decades from now, knowledge will be equal” across the globe, he added.

He said the current tariffs on Chinese products are “ridiculous,” although “China does deserve to be called out on certain things.”  Nevertheless, the Chinese “can stand pain a lot longer than we can. They think in terms of centuries; we think in terms of weeks. They’re going to win.”

One area ripe for the introduction of derivatives markets, if anyone can figure out how to work them – is the healthcare industry and drug costs, Melamed said.  Drugs we rely on have enormous costs, but there is no way for the drug companies to hedge that cost. If someone could figure out a contract, he said, it would be a great service and market.

ASIC is warning that it has seen an increased number of reports from consumers who lost money responding to ads disguised as fake news articles, mostly promoting crypto-assets and contracts for difference trading.