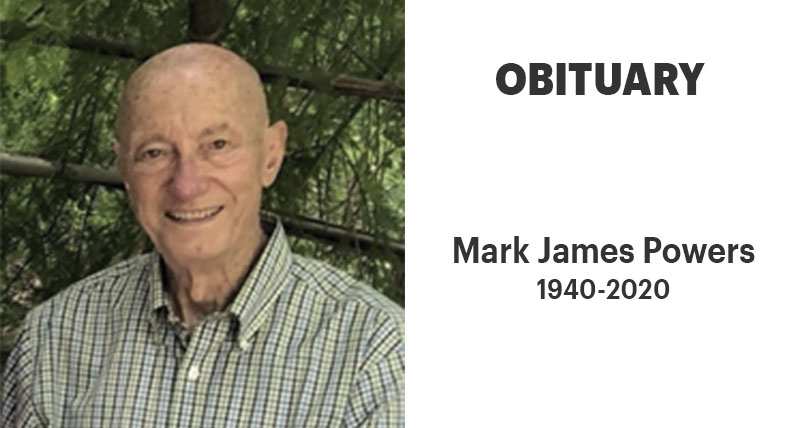 The following obituary was provided by the Powers family:

Mark James Powers, aged 80, died peacefully in his home in Durham, NC, on Tuesday, November 17, 2020.  Mark was born in Mauston, WI on September 16, 1940, to James and Emma (Feldbruegge) Powers, the seventh of their eleven children.  After graduating from Madonna High School in Mauston in 1958, he served in the National Guard.  He trained at Fort Leonard Wood in Missouri in 1959 and again was called to active duty in 1961, when he spent a year at Fort Lewis in Washington.  In between and after his National Guard duty he attended Wisconsin State College, Platteville (now Wisconsin State University-Platteville), graduating from there in 1963 with honors with a BS in Agricultural Education.  He married Josephine (Jo) Moriarty in Mauston on June 13, 1964 and they had 2 children.

In 1965 Mark earned a Master of Science degree from the University of Wisconsin in Madison and accepted a professional and research position with South Dakota State University in Brookings, South Dakota.  In February 1972 Mark was named vice president for research and education for the Chicago Mercantile Exchange.  He was known as a “founding father of financial futures.”  He was one of the originators of the International Monetary Market in Chicago, where he served as a senior vice president and was a key participant in drafting many of the original contract specifications for trading currency and financial derivatives.  He served as chief economist for the Commodity Futures Trading Commission in Washington, D.C.  From 1980-1998 he edited The Journal of Futures Markets and authored several books on futures trading.  In recognition of his role in the industry and his published work, Dr. Powers was awarded the Rose-Baratz Literary International Award in 1994.  Mark was involved in the industry in many other ways, including serving as an arbitrator for the National Futures Association and as an expert witness for several court cases.  His love of and fascination with futures also lead him to create and publish the board game Bulls, Bears N’ Bellies with Ron Frost.

For most of his professional life, he owned and ran his own businesses, primarily Powers Research, Inc. which he started in 1980.  The firm adapted over time and engaged in money management, consulting, forming and managing hedge funds, and a number of other finance roles, with financial futures always at the heart.  Ultimately the firm became Liberty Gateway Asset Management and was Mark’s passion to the end.

Mark was a very hard worker.  He never had much interest in hobbies, if it wasn’t work, it wasn’t worth doing!  He did enjoy experimenting with cooking and loved cook-off competitions with friends and relatives.  He also loved spending time with his wife Jo, baseball, visiting art museums, and reading.

Mark is survived by his son, Jim [Karin], of Bridgewater, NJ, and his daughter Sheila of Bellevue, WA.  He is also survived by his grandsons, Keith and TJ, his sisters Monica [Joseph] Jerich, of Milwaukee, WI, Mary Carol Powers, of Rockford IL, Louise [John] Maxworthy, of Merrick, NY, Ruth [Bill] Michels, of Eau Claire, WI, Marica [Scott] Kelley, of Springfield, MO, and brother, Stephen [Jane] Powers of Mauston, WI, and many nieces and nephews.  He was predeceased by his brother, Kieran, of Lyndon Station, WI and his sisters, Patricia Ann Rogers of Camp Douglas, WI, Rita Leahy of Lake Geneva, WI and Bertha Jean Ahler of Lyons, WI.

Mark has been cremated and a memorial service will be held at a later date at St. Patrick’s Church in Mauston, WI.  The ashes will be interred in St. Patrick’s Church Cemetery.  If friends wish, donations in Mark’s memory may be made to the Polycystic Kidney Disease Foundation (pkdcure.org), American Kidney Fund (kidneyfund.org), or a charity of your choice.