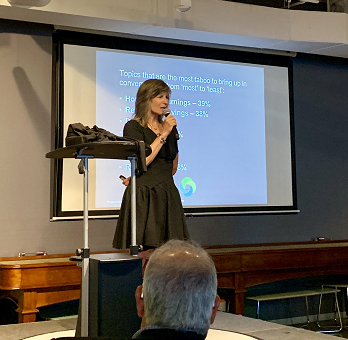 Cryptocurrencies and blockchain were not the only themes at the MarketsWiki Education World of Opportunity event at the headquarters of Trading Technologies on Tuesday, but they kept cropping up.

The first presenter, Colleen Sullivan, is the CEO and cofounder of CMT Digital, a company that is all about crypto and blockchain. Sullivan got started in the trading world when her uncle, who worked for Michael Milken, gave her a t-shirt that said “Junk Bonds Keep America Fit.” She worked as a runner at First Options and then later in the legal department, and went on to law school. Her legal background led her to Sidley Austin, where she first heard about blockchain when she read the bitcoin white paper. In 2013 she told the partners they should start investing in bitcoin. But bitcoin was a big unknown then, and not regulated at all. She ended up co-founding CMT and launching a bitcoin trading desk there in 2016. Her legal expertise tells her that “we need to get the regulatory environment right” for cryptocurrencies – as Switzerland has done – or the U.S. will end up being a follower rather than a leader in the space, she said.

Rumi Morales, a partner in Outlier Ventures, talked about blockchain and how that and other technology is transforming finance, giving a brief history of hundreds of years of trading in about five minutes. The biggest change in trading is of course – as she showed in photographs – that it is now driven by machines, and the crowded, jostling floors have been replaced by rows of computer desks nearly empty of people. Morales said blockchain is revolutionary because there is no central counterparty needed. She is also excited about the “trillions” of communication devices now coming online, as well as things like self-driving cars and intelligent sprinkler systems that “can create and hedge their own water risk.”  She said we will be seeing a Convergence Ecosystem driven by the Internet of Things (IOT), blockchain, and Artificial Intelligence (AI).

Kathryn Trkla, a partner at Foley & Lardner, also talked about the enormous transition from floor to screen trading along with changes in market regulation. She recalled the pivotal moment in 1987 when the CME said they would offer electronic trading after hours, which “sent shockwaves through the community,” as well as the FBI sting at the CBOT and the CME in 1989, in which a number of people were arrested for breaking exchange rules, a federal crime.

Nancy Kaplan, co-founder of the Women’s Money Lab, talked about talking about money. Money talk is the last and strongest taboo, but she emphasized how crucial it is, in particular for women, to talk about money and to establish money goals, organize yourself financially, use a support group, and ask questions. Women’s salaries peak in their 40s and they typically retire with ⅔ the money men do and are approved for fewer loans. Kaplan also put on her black belt and said that “A black belt is a white belt who never gave up.”

Todd Briggs, a partner at RSM US LLP and a CPA, discussed FOMO (which, if you’ve been missing out on things, means Fear Of Missing Out) and how it affected his career and crops up again and again in the financial world, for example in the Madoff scandal and the subprime mortgage crisis. There can be a good side to FOMO, however, when you jump into what seems to be a golden opportunity and it turns out it is – but the timing is tricky. Again the digital asset space came up – a relatively new example of FOMO in the markets – but the newest example of FOMO, Briggs suggested, is the Cannabis market. Whatever you decide to do in response to FOMO, he said, it is important at least to recognize it.

David Silverman, the CEO of Alpha Trading, gave a lyrical speech on greed, which he said is really about ego, security, and delusions of grandeur. Is “greed, for lack of a better word,” good, to quote the movie Wall Street? Not in Monty Python’s The Meaning of Life, where an enormous man explodes after a huge dinner when he adds on one wafer-thin mint. And not in Tolstoy’s short story, “How Much Land Does a Man Need?” in which a man is guaranteed all the land he can pace off as long as he returns to his starting spot before sunset, but his lust for more land trips him up in the end. Silverman also gave examples of how greed operated during his own trading career, for good and ill.

Andy Busch, former CFTC chief marketing intelligence officer, gave a lively talk on the strangeness of working in Washington, D.C., where there are 6,000 journalists covering the capitol and there is “someone always out to get you” – and where the CFTC is the most hated of all the government agencies. He said that when the CME and CBOT said in 2017 that they planned to offer bitcoin futures, there was a “white-hot focus” on cryptocurrency at the CFTC because it is such a volatile instrument. But now cryptocurrency platforms actually want to be regulated to give that “Wild West of finance” credibility, Busch said.

Julie Armstrong, the chief commercial officer of ChartIQ, extolled the power of networking, including learning how to golf (because, let’s face it, that’s where much of the networking in this industry takes place). She and Rumi Morales had started a women’s network at the CME and she questioned, “How do I use the power of my network to help other women in the company?”  Starting the network ended up being “one of the best things [she] ever did.” Networking helped her get back into business after the 2008 crash shut down Lehman Brothers, where she worked. Armstrong is a big fan of LinkedIn, and said it is crucial to “make sure every interaction you have on LinkedIn is meaningful” because every connection leads to another and another.

Larry Israel, the president of Exchange Analytics, gave a talk on ethics in the futures industry. Yes, they exist. After the 1989 FBI sting at the CBOT and CME, the government slapped on an ethics training requirement – really a market conduct requirement. Israel quoted Potter Stewart on the difference between legal and ethical, and said that as a futures professional, there will be some time in your life when you will be faced with an ethical dilemma, and you need to be prepared and understand the rules. He had questioned some orders he was given back in his trading days as to whether they were wash trades or a clerical mistake. Markets move so fast that it is hard to investigate such questions, he said.

Lori Kevin, managing director of operations for CSG, brought up security, a huge concern in today’s digital world. The many threats to companies include identity theft, of which she was a victim; carding; spoofing (impersonating an IP address); and credential stuffing (gaining someone’s user name and password). These threats can be fought off by identifying policies and procedures, having access controls for everyone on the network, having a secure network (including, for example, voice recognition), identity management and of course anti-virus programs.

Donna Heidkamp of RJO praised the financial industry for giving her the ability to be a lifelong student, learning about the economy, politics, culture and many other topics. She listed some misconceptions about the futures industry, including the myths that there is too much leverage in futures, you have to take delivery, you probably don’t have enough money to invest in futures, and nobody makes money in futures (of course they do – it’s a zero sum game!)  She said the first thing to do when you begin trading futures is to look for products with the most liquidity.

Lexy Prodromos, business development manager at the fintech company Bloq, studied opera in college but wound up fascinated by the idea of blockchain. She attended law school and was interested in the changes in the law brought on by technology and how tech was being regulated. Things really gelled when she attended the Consensus conference in New York City and discovered smart contracts. She became involved in the Illinois Blockchain Initiative and other crypto-related initiatives in Chicago, and like some of the other speakers she is a big booster of Chicago as the site for technology development in the financial arena. Blockchain needs builders, she said, and there is so much information out there that is there for the taking.