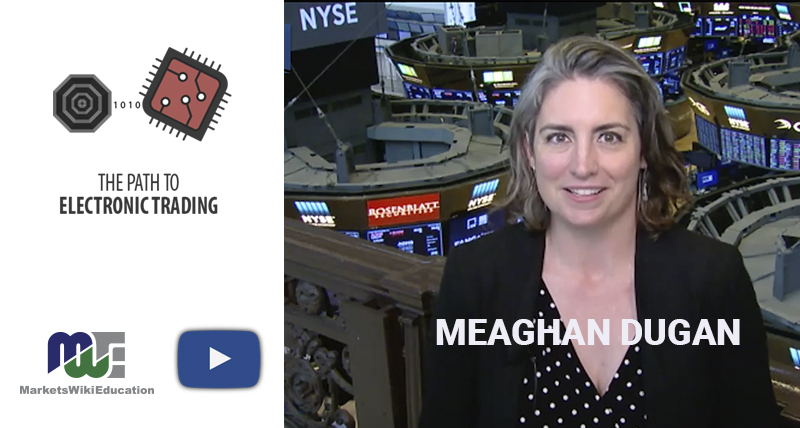 Dugan had moved to Northern California to pursue her dream of being a chef and was living with family there. Her aunt had a friend who worked on the Pacific Stock Exchange trading floor.

Dugan met with an exchange employee, who is still a good friend today, took some tests and was hired by the exchange as a market quote analyst. She was struck by the industry and how options worked.

A few months later, an opportunity opened up at Spear, Leeds & Kellogg on an options team there. She was hired as a clerk and dove into more research about the markets and options.

It was before multi-listed options and at the time, options were regionally quoted. Microsoft traded at the Pacific Exchange and she watched the crowd there to learn how to do it.

Dugan participated any way she could, including mock trading exercises after the close, to learn more about trading and markets.

She was working on the floor at the exchange during Y2K, which was taken very seriously. Some traders and exchange staff were concerned trading systems would not work after the turn of the century, but the exchange was ready.

Dugan said decimalization was another issue she dealt with during this time, as options moved from trading in fractions to decimals. This was a change the exchanges had to make quickly, she said. There was concern about the spreads narrowing because of trading in decimals and the impact this would have on profitability.

Traders were also concerned with demutualization and the impact that could have on liquidity and the narrowing of the spread between the bid and offer of options trading on the Pacfic Stock Exchange. There were issues like handling the data from multiple listings, which was a challenge for both exchanges and traders.

Dugan spoke about the impact the International Securities Exchange brought to the options markets as the first all-electronic exchange.

She left Spear Leeds & Kellogg and was hired by Tim Brennan at Morgan Stanley, who also hired Pat Hickey, now head of business development at the OCC.

At Morgan Stanley, she was on the floor for the automated market making group. She and Hickey were connected to the traders in New York with an open bridge phone line, where the language was sometimes colorful but which gave them insight into what was happening on the East Coast.

In 2006, she and Hickey would move to New York for Morgan Stanley, making markets remotely. Eventually, Tim Brennan hired her at Merrill Lynch after he moved there.

At Merrill she had a greater opportunity to work with the single-name trading desk and with futures, and even interfaced with clients. She began selling algorithmic trading tools to hedge funds and had a more holistic relationship with clients.

She joined the ICE/NYSE team in 2019, which she said felt like coming home.