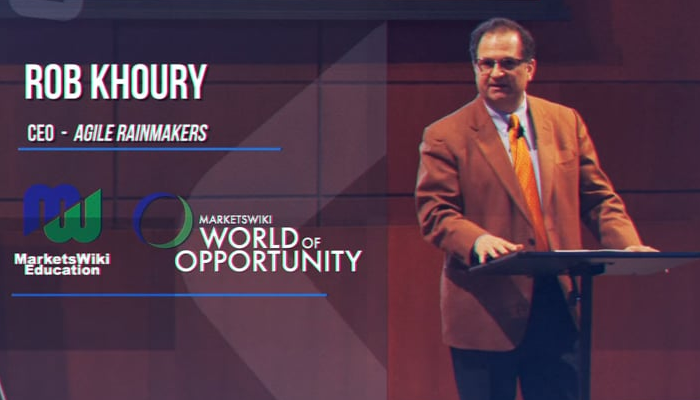 Rob Khoury – Interviewing and Career Tips for Your Future
JohnLothianNews.com

In this video from our MarketsWiki Education World of Opportunity event in Chicago, Robert Khoury, the CEO of Agile Rainmakers, a business development consultant and advisory firm, gives graduating students tips on job interviewing and careers, drawing from his 21 years in the financial industry. He learned a lot from his mistakes, and his practical suggestions are intended to empower those just starting out on a career in the financial industry or in any field.

Out-of-whack Credit Suisse security puzzles volatility traders
Saqib Iqbal Ahmed – Reuters
A small, unexplained aberration in a highly specialized corner of the vast U.S. equity and derivatives market is causing a buzz among traders already on edge about a potential market pullback.
An exchange-traded note issued by Credit Suisse Group AG, commonly known as TVIX, that tracks stock market volatility is trading at a premium of about 3% over what it should be priced based on its underlying securities. That premium is about twice the average for the past year.
/reut.rs/2Alppgc

Oil Prices Today: West Texas Intermediate Crude Soars Post Attack
David Marino and Michael Roschnotti – Bloomberg
Some 62 million barrels of October call options on West Texas Intermediate crude — that were set to expire worthless on Tuesday — were suddenly in the money after prices spiked on the open.
As of Friday, there were 61,577 outstanding calls with strike prices ranging from $55 to $60 a barrel, higher than the $54.85 a barrel settlement.
/bloom.bg/2Am2262

Momentum shift and Saudi Arabia oil spike sends hedge funds spiralling
Callum Burroughs, Trista Kelley and Bradley Saacks – Business Insider
Hedge funds that specialize in bearish or short bets and quant funds may have been crushed after the price of crude spiked as much as 20% Monday, a fund manager in London told Business Insider. The surge, triggered by attacks on Saudi Arabian oil facilities over the weekend, came as the hedge funds were already reeling from a sudden shift in equity markets.
bit.ly/2Ao0AQY

Notice of Disciplinary Action: Syntex Energy LLC
CME Group
Pursuant to an offer of settlement that Syntex Energy, LLC (“Syntex”) presented at a hearing on September 12, 2019, in which Syntex neither admitted nor denied the rule violations upon which the penalty is based, a Panel of the NYMEX Business Conduct Committee (“Panel”) found that during the time period of November 2017 through July 2018, Syntex submitted multiple block trades in Crude Oil futures to the Exchange with inaccurate execution times.
bit.ly/2khRCjy

Notice of Disciplinary Action: Alpha Academic Limited
CME Group
Pursuant to an offer of settlement in which Alpha Academic Limited (“Alpha Academic”) neither admitted nor denied the factual findings or rule violation upon which the action is based, on September 12, 2019, a Panel of the New York Mercantile Exchange (“NYMEX”) Business Conduct Committee (“BCC” or “Panel”) found that during the time period from December 11, 2017 to March 1, 2018, a former Alpha Academic trader prearranged the execution of round-turn transactions in Steel futures contracts between an account owned by Alpha Academic and another account owned by another individual.
bit.ly/2kn8TIg

FCA chief calls on EU to soften stance on markets in event of no-deal Brexit
Philip Stafford – Financial Times
The head of the UK markets regulator has called on Brussels to offer more equivalence permits to smooth potential disruption to markets if the UK leaves the EU without a deal next month.
At an event hosted by Bloomberg in London on Monday, Andrew Bailey, chief executive of the Financial Conduct Authority, called on his counterparts to guarantee that investors and banks will have long-term access to London’s critical derivatives trading infrastructure.
/on.ft.com/300IgM2

Data Errors Plague Stock Traders in Volatile Week
Alexander Osipovich – WSJ
Volatile stock markets, recession fears and the U.S.-China trade fight have traders on edge. Now, they are grappling with another problem: garbled data.
The troubles started Monday with a glitch on a key market-data feed operated by the New York Stock Exchange. That was followed by what looked like calamitous drops in Vanguard Group mutual funds, incorrect prices for stocks like Apple Inc. being flashed over Bloomberg LP terminals and the Dow Jones Industrial Average suffering a mysterious outage.
/on.wsj.com/31Gq1si

JPMorgan Says the Momentum Rotation Isn’t a ‘Quant Quake’ Yet
Joanna Ossinger – Bloomberg
The market rotation into momentum and value assets has left some losers in its wake, but it’s no “Volmageddon” like February 2018, according to JPMorgan Chase & Co. The big shift has garnered attention as investors try to figure out what’s behind the move and the implications for funds. Bonds have had a rough month so far, with yields on 10-year Treasuries surging 40 basis points since the beginning of September. In the past week, the S&P 500 Index rose 1% to retake the 3,000 level and come within 1% of its record high, and the Cboe Volatility Index fell to 13.74, its lowest close since July 29.
/bloom.bg/2kOT0ud

VXX: Stay Short Volatility
Seeking Alpha
In this article, I will explain why shares of VXX basically continuously fall as well as why I believe that we will see shares fall at an even more rapid pace in the coming weeks.
bit.ly/30lcjtS

Why investors are holding their noses and buying stocks
Paul R. La Monica – CNN
TINA (There Is No Alternative) has become a popular mantra on Wall Street. It explains why stocks are near record highs despite concerns about trade tensions with China and what’s expected to be another round of lackluster corporate earnings next month.
Not even a huge surge in crude prices Monday following an attack on Saudi oil facilities over the weekend was enough to dampen investor enthusiasm all that much. The Dow fell a little more than 150 points, or about 0.6%, Monday. That’s a pretty tame drop, especially when you consider that the blue chip average had gained for the prior eight trading days.
/cnn.it/30hXhVO

U.K. Urges EU Rethink on ‘Damaging’ Brexit Equities Plan
Silla Brush – Bloomberg
Equity markets will face significant damage in a no-deal Brexit unless the European Union reverses a plan to block traders in its home territory from using London exchanges, the U.K.’s top market watchdog said.
Andrew Bailey, the Financial Conduct Authority’s chief executive, called on the EU to urgently rethink its position before Oct. 31, when Britain is scheduled to leave with or without a deal. Trading in a large number of European shares will be harmed, Bailey said in a speech on Monday in which he called for a new round of talks with European counterparts to prevent a rupture in markets.
/bloom.bg/30owebi