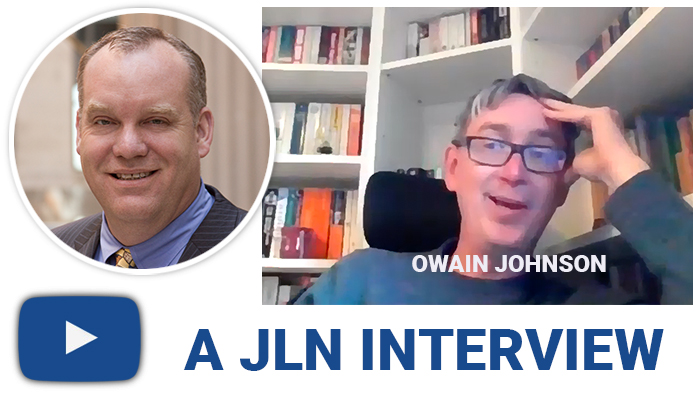 CME’s Global Head of Research in London Interviewed by JLN

Things are happening so fast amidst an acceleration of economic change that the old order of product adoption by various categories of industry players is being upended, Owain Johnson told John Lothian News in a recent interview.

The CME is pushing out into new asset classes from its core, which Johnson calls a “very strong core.”

He called “the great environmental focus” what is ”really shaking things up generally and creating a lot of new products that did not exist or did not need risk management.“

Listening to what customers are working on and what risks they are seeking to manage, and what keeps them up at night, gives Johnson and his 25-person team the information they need to design new products.

“There have always been lithium and cobalt and they have always existed and always traded, but now there is a massive focus because they are driving Tesla.”

“They are powering mobile phones, they are powering Teslas,” he said. “Now all of a sudden battery metals are an asset class that needs risk management or that needs significant investment that needs hedging.  Or people just want to invest in it. They think there are growth opportunities there.”

Johnson and the CME research team focus on institutional players first when constructing a new contract. They want the users who are going to use the product to hedge ready on day one of its launch.

He noted, however, that the order of the list of players that join a contract as it develops is changing, as some firms are getting involved earlier because of mandates to be more sustainability focused.

He said after institutions traded a new contract, banks would show up, then hedge funds and proprietary trading firms — in that order. However, some of the environmental markets are so hot right now, that some hedge funds and asset managers are jumping ahead of their normal positions and getting into markets earlier.

Johnson started his career as a journalist and said being a reporter is a great way to listen and learn about a lot of things. One can use those listening skills in many ways. Johnson used those skills as a journalist, in his transition to becoming an analyst and when he made the jump to his current position as a researcher.

It also helps to be able to listen to people around the world in their own language amid their own culture. Johnson studied multiple languages in school and has lived in South America, Asia and the Middle East while a journalist, analyst and researcher. He has called Chile, Venezuela, Singapore, Dubai and London home, all for years at a time.

It is not just Johnson who is a world traveler.  He moved with his wife and daughter to Singapore and their son was born there. Their children learned Chinese and Arabic during their years abroad, but they are back in the U.K. for their high school years.

Johnson is a British citizen by background, but he said he considers himself a citizen of the world. He was working for Argus Media in Singapore trying to interest the CME in an index contract, then the CME hired him as part of their build up in Asia. In the dozen years since he joined the CME, the headcount in the region climbed from 10 when Johnson joined to 500 people in seven Asian locations today.

When he joined Julie Winkler’s research team at the CME Group, most of the Asian staff was customer-facing, but today all aspects of the exchange’s operations are represented in Asia, Johnson said.

The other big change that has occurred is the liquidity in the CME Group’s products during the Asian hours. He said when he started, bids and offers were wide on the screen the first thing in the morning, and you might not even see numbers on the screen for some markets.

However, now with the big products at the CME, you “see markets ticking away all throughout the Asian morning or Asian afternoon. That is a big change,” Johnson said.

“We really used to wait until London woke up to see things trading and now you get that from the get-go in Asian time. The big trend towards almost 24-hour trading has been the trend in the last 10 to 15 years.”

It was geopolitics, the story of the real economy and a desire to see the world that attracted Johnson to journalism and commodities. Johnson said he was fortunate to have lived in  countries in South America with big commodity profiles and saw their impact on governments and changing people’s lives. “I could never really look back after that,” he said.

“I guess I am just a sucker for interesting stuff, that is what motivates me,” Johnson said.

“It is just impossible not to find this stuff interesting,” he added.

Johnson’s favorite place to call home was Singapore because when he was there the commodity supercycle was really important, he said. And China was emerging as an economic superpower at the same time.

“To see that firsthand was a great opportunity,” he said.

And to be part of a company that was growing rapidly in the region was exciting, too, he said.

“I felt I was in a growth area in a company that was growing strongly in a region that was booming. I think that was kind of really exciting,” Johnson said.

Another growth area for CME products has been the broadening of their micro product offerings. The new micro contracts have allowed for more precision hedging, Johnson said. As asset prices rise it makes it harder for some users to participate in the larger-size traditional contracts, he said.

He equates micro contracts to a stock split that occurs when a stock’s price has increased so much that it makes it more difficult for investors to buy.

Johnson and his staff are keeping an eye on the fast-developing decentralized finance, or DeFi, space. But there is nothing that jumps out at the moment in the space, he said, noting that the CME recently launched both ether futures and a micro-bitcoin contract.

Some ideas for new contracts can be right, but their timing can be wrong. Johnson noted that the CME’s 3-Year Treasury futures contract was launched during the financial crisis of 2008-09. The flat yield curve at the time was not the right environment for the 3-year Treasuries, he said.

However, 10 years later, the CME relaunched the contract and it has prospered, he said.

Johnson and his research staff have to be optimists, glass-half-full kind of people, he said. “You can be right at the wrong time. That is the same as being wrong,” Johnson said. “It is not that the idea for the product was wrong, it was that the timing was wrong,” he added.

His staff also needs a good combination of writing and numerical skills, which is a difficult combination to find. He said while not every contract works out, nothing is lost from the experience. “I never feel any time we have spent has been wasted, because there may come a time that is right,” he said.

Johnson said he does not just look at volume or open interest to judge if a contract is successful. He said he likes to think about new contracts more holistically and strategically. The price data from a lightly traded contract that has duration to its open interest can produce some important price signals to the markets, he said.

While listening to customer needs is important, Johnson noted there is no cost for a customer to simply recommend a new contract. “We have to be really driven by the customers by [being] really analytical ourselves,” Johnson said.

Johnson said he wants to hear new ideas from customers and academics and they should reach out to a member of the CME research staff, which is spread out in London, Singapore, New York and Chicago.

The best practice when making a suggestion is not to disclose anything proprietary, or to have a signed non-disclosure agreement when engaging with the CME, Johnson said.