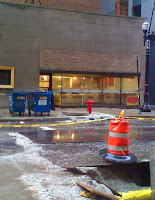 It’s true, I went over there to get some lunch and they had already shut it down. I tried to get in the door but it was locked, the owner and his wife were in there and they gave me the same blank look ( total non recognition) that they’ve always given me, even though by my calculations I’ve been in there at least 1200 times in the last 23 years(23years x 52). That’s only allowing for 1 visit per week, in the early days it was 2 or 3 visits per week.

God I’m going to miss those people, too bad they didn’t learn a single word of English besides “next” “everything?” and “5 dollar”, I could have asked what they were going to do next. Truly the end of an era. Adios, Sayonara, Hasta La Vista, Arrivederci, auf Wiedersehen Peppers.