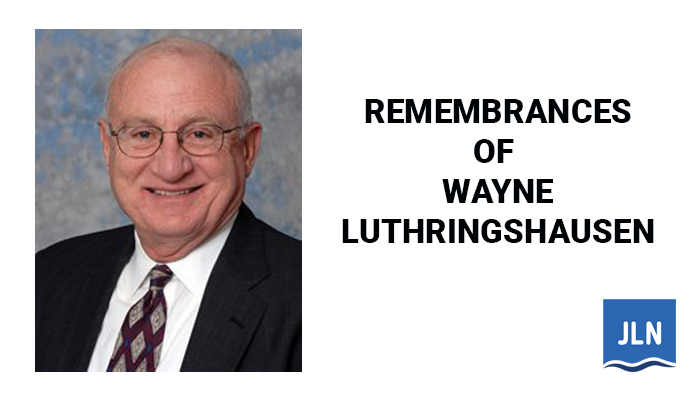 Here is a list of remembrances of the life of Wayne Luthringshausen, the retired chairman and CEO of the Options Clearing Corporation:

OCC’s Board of Directors, management and colleagues join the entire options community in honoring the life of Wayne Luthringshausen.

Wayne is widely regarded as one of the founders of the U.S. listed options market. Starting in 1970, shortly before the creation and launch of the Chicago Board Options Exchange Clearing Corporation, Wayne was asked to lead the project to launch the clearing corporation and was soon appointed the company’s first President and CEO. Shortly thereafter, he was instrumental in restructuring the organization to create a clearinghouse for the entire listed options market, now known as the Options Clearing Corporation (OCC).

Wayne retired from OCC in 2013 after leading the company for more than 40 years to spend more time with his family and to focus on his woodworking passion.

Wayne was a great mentor to so many individuals within the industry and the community, and played an important role in the lives and careers of many current and former OCC employees. He left a mark far beyond his career accomplishments and will be missed.

We send our deepest condolences to his wife Karen, his children Kevin, Kelly, and Kristin, and the entire Luthringshausen Family.

From Pat Arbor, former chairman of the Chicago Board of Trade:

Wayne Luthringshausen was a stalwart pioneer of our financial industry – heading the OCC for over 4 decades. His steady hand at leading the OCC provided the financial foundation of cleaning traded options and helped lead to the huge options volume traded today. He was a strong, steady force and quiet leader.

It is very hard to encapsulate in a few lines the impact that my long time boss and friend Wayne had on all those who knew him personally and professionally. One indication of his impact professionally was the single name recognition that he had throughout the securities and commodities business. “Wayne” meant OCC. Most people were aware of his long tenure at OCC, but some may not know that he started as a 26 year old building the system that became OCC, was named President at 29, and became Chairman and CEO in his 30’s. I liked to joke with him that for such a smart guy he sure had career stagnation, no promotions in over 30 years. He was truly a transformational leader in the industry. At OCC he was founder, builder, and leader, but also Wayne to everyone. Never Mr Luthringshausen or Mr Chairman. From a new hire’s first day they knew only first names were used from the top down. That was indicative of how genuine he was and how much he truly cared for the people he worked with. He would often walk around and engage people in conversations to both get a real feel of current issues but also to reinforce that everyone’s opinion was important. It made his employees sincerely appreciate him and love him for being so open. A lot will be said about his incredible impact on the options business but I think his biggest impact on everyone who knew him was the example he set as a family man. He was always so proud of his family and ready to regal us with every accomplishment of his children and grandchildren. I know I am a better person for knowing Wayne Luthringshausen for the past 38 years. My heartfelt condolences go out to Karen and the whole Luthringshausen family.

Wayno was a wonderful person and a true gentleman. His word was his bond always! I had the opportunity to serve on his Board and learned how to run a meeting from him. He served on the BOX Exchange Board for several years, and he was always a tireless advocate for the options industry who never lost his cool regardless of the heat of the moment. Never a great golfer, he still had passion for the game and chased the ball with the red W far and wide. He was a great friend to me and many others in our industry and will be greatly missed! My condolences to his lovely family.

“I first met Wayne in the Fall of 1972 when he and Joe Sullivan were trying to get the main line Wall Street brokerage firms to buy a seat on the soon to be opened Cboe.

Wayne had worked for a regional firm in New Orleans, Kohlmeyer and Co. He was recruited to the Chicago Board of Trade and Sullivan, CBOE’s first CEO & President, later hired him to be the President of the Cboe Clearing Corp, the wholly owned subsidiary of the new exchange.

This was due to the “”paperwork crunch”” of the late 1960s which demonstrated that when each stock exchange had its own clearing house, the whole settlement process for stocks became a weak link in the securities settlement process.

Therefore, the SEC told the Amex, you can get into the options business, but there has to be a “”common clearing”” entity for all options traded in the US. By that time I had been promoted to head the Amex Options business and we had to find a way to transform the existing Cboe Clearing Corp into a single entity to clear all US traded options.
The result was the creation of the Options Clearing Corporation which commenced business contemporaneous with the launch of the Amex Options program on January 13, 1975.”

I was the Amex’s designated representative to the OCC board, which had equal representation from the Chicago and New York trading communities. Our meetings alternated between New York and Chicago. As a result, I became a regular visitor to Chicago.

There was great concern at the Amex that the OCC management, which was 100% from the original Cboe Clearing Corporation, would favor the Cboe over the Amex. As a result, to allay those fears, the new OCC opened a NY office to be led by a senior Amex staffer and another Amex staffer (both to become an OCC officers) was deployed to Chicago to “keep an eye” on Wayne and his t eam.

As a board member, it was incumbent on me to make sure this arrangement worked. In reality, Wayne was a total stand-up gentleman and went out of his way to make sure that his team treated the Amex fairly even though people assumed that he would favor his Chicago buddies.

Wayne was a master in integrating the new exchanges as participants of OCC and welcoming board members from each participant. In addition, he was the consummate professional in “managing” his board.

The growth was so rapid that OCC had to constantly add staff and computer capacity just to keep up. Wayne handled the technological expansion and the staff growth in a most competent way.

When I left the Amex and moved to the CME, I left the OCC board. By then, Wayne and I had established a very strong professional and personal bond. That became incredibly valuable on October 19, 1987 when the stock market crashed. Due to the level of trust between Wayne and me, we were able to avoid the collapse of a major clearing firm because at that time there was no “cross margining” between stock index options traded at the Cboe and stock index futures traded at the CME. Based on the level of trust that Wayne and I had, in the wee hours of October 20th, we verbally agreed to treat the two positions as offsets and a catastrophe was averted. In the aftermath of the crash, a formal cross margin protocol was established between the ace and the CME clearing houses.

“In 1997, when I joined the Cboe as Chairman and CEO, Wayne and I resumed our professional relationship. Cboe was the largest player in options and we worked with Wayne on many initiatives. CBOE launched Cboe Futures Exchange which selected OCC as its clearing house for VIX futures. In another major initiative, Cboe persuaded the SEC to allow for portfolio margining of options positions in partnership with OCC.

Wayne was one of the true founders of the exchange traded options business. He led the OCC from its formative years, through many years of explosive growth and was highly successful in building a world class clearing organization. He will be greatly missed.

My condolences to Karen and his whole family.

I had the distinct honor of serving for 6 years in the 1990s on the Board of Directors of the Options Clearing Corporation representing Sage Clearing under Wayne’s leadership as Chairman. Wayne was a great visionary, who implemented many new initiatives that bettered and made the clearing process more efficient and effective. Out of his tenure when I served on the Board, came the innovations in the stock hedge margin program, risk based haircuts for market makers, coordinated settlement of exercise and assignments with NSCC, the cross margin program with the CME and the Options Industry Council. Yet Wayne never lost sight of the members that he was serving, and returned fees to the members in form of rebates every year when possible. Wayne was a mentor, trusted colleague, golfing buddy, and dear friend. We will miss him.

A Transfomative Leader
I had the honor of interviewing Wayne many times. What a thrill to meet someone who was there at the beginning of a transformative movement that would change global financial markets. Wayne was instrumental in laying the foundation for the options industry with the creation of the Options Clearing Corporation. Without his contributions, passion and vision, it is fair to say the options industry would look very, very different today. His push to create common clearing for the US options industry built the backbone for what became a pioneering and powerhouse asset class that continues to grow to this day. Talk about building and leaving a legacy for generations. Wayne and his team at OCC certainly left an imprint on a global scale that will carry on.