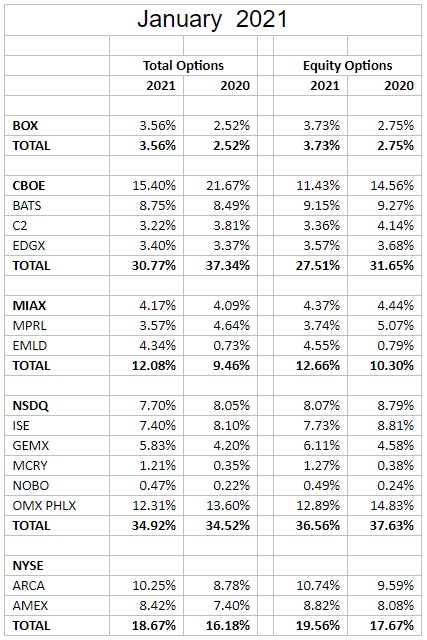 Retail trading fever drives U.S. equity option volumes to record monthly high
Thyagaraju Adinarayan – Reuters
Trading volumes in U.S. equity options surged 70% to hit a record monthly high in January, data from Options Clearing Corporation showed, as a retail share trading boom drove extreme gains in some small-cap stocks such as GameStop.
The use of such derivatives, which allow holders to buy shares at pre-determined prices, has ballooned over the past year amid COVID-19 lockdowns as they became more popular with small-time investors, who often trade from home on their phones.
In particular, retail investors have piled into call options on individual stocks.
/jlne.ws/3oMuwg2

GameStop bears use options to profit from stock’s plunge
April Joyner and Saqib Iqbal Ahmed – Reuters
Bearish investors are using options to capitalize on a slump in shares of GameStop Corp by more than half their value on Tuesday.
Put options, often used to protect against losses or position for declines in a stock’s price, outstripped bullish calls in volume by a ratio of more than two to one on Tuesday, continuing a trend that has seen bearish derivatives bets on GameStop grow over the last week-and-a-half.
/jlne.ws/39K5HNL

VIX, Skew, ETF Shorts Show Stock Market Still Pretty Far From OK
Lu Wang – Bloomberg
With GameStop Corp. in retreat, signs of normalcy emerged on Wall Street. Which in 2021 means traders were free to get back to stressing about SPACs, crypto and all those Faang options still in circulation.
Given the backdrop, it no surprise that volatility futures are refusing to sound the all clear. Contracts on the Cboe Volatility Index showed traders are wagering on an elevated level of price swings all the way through March. In options, the cost of S&P 500 puts rose to a three-year high relative to calls, a sign of caution among options traders.
/jlne.ws/3oKm4Os

For One GameStop Trader, the Wild Ride Was Almost as Good as the Enormous Payoff; A small-time trader turns $500 into more than $200,000
Gregory Zuckerman – WSJ
Anubhav Guha started day trading a few thousand dollars in March but managed to lose half of his money despite the stock market’s epic rally last year. He made that up and far, far more betting on GameStop Corp. GME -60.00% Mr. Guha turned $500 into $203,411 in less than three weeks with an options trade on the mall retailer. The rally and now collapse of GameStop was a dramatic clash of small-time traders against hedge funds, but for Mr. Guha it was more of a lottery ticket, though it had more ups and downs than a typical Powerball drawing.
/jlne.ws/3cDISxc

Don’t breathe easy just yet: there’s more volatility ahead
Andrea Riquier – MarketWatch
Whether the recent squeeze by individual investors in heavily-shorted U.S. small capitalization stocks is a seven-day wonder or something more permanent remains to be seen, but the market choppiness that went along with it is likely here to stay.
That’s the takeaway from an analysis by DataTrek Research, published Tuesday. The firm’s co-founder, Nicholas Colas, outlines moves in the CBOE Volatility Index, popularly known as the “VIX,” for its ticker, and often referred to as Wall Street’s “fear gauge.”
/jlne.ws/3pP4pGE

How One ETF Took Silver on a Roller-Coaster Ride
Evie Liu – Barron’s
The world’s largest silver-backed exchange-traded fund, the iShares Silver Trust, saw an inflow of $868 million of new assets last Friday—the largest single-day jump in its nearly 15-year history—followed by another $511 million on Monday.
Since the iShares ETF (ticker: SLV) has to own the equivalent amount of physical silver to create new shares, the huge demand helped push silver prices up by more than 10% to reach over $30 per ounce intraday Monday, hitting the highest level since 2013.
/jlne.ws/3oJdqQj

Robinhood plans to forge ahead with its planned IPO this year despite GameStop controversy, report says
Matthew Fox – Markets Insider
Robinhood’s controversial decision to limit trading in a handful of volatile stocks isn’t derailing its plans to go public later this year, according to a report from Bloomberg, citing people close to the company.
Robinhood has seen a surge in business over the past year as a new generation of investors flocked to the stock market amid a global pandemic that shut down professional sports leagues for months on end.
The company had more than 13 million users at the end of 2020.
/jlne.ws/2MLE4e5

Bloomberg Face-Off Awaits London Stock Exchange Following Refinitiv Deal
Ben Dummett – Bloomberg
Now that the London Stock Exchange Group PLC has completed its $15 billion acquisition of financial data company Refinitiv Holdings Ltd., the next big test is proving it can reclaim at least some of the ground it has lost to industry heavyweight Bloomberg LP.
Refinitiv competes against Bloomberg selling an array of financial-data to the finance industry. Yet, Refinitiv’s share of the market against its rival has been declining for years. That underscores the LSE’s challenge, particularly given that some users say Bloomberg’s ubiquitous data terminal that is found on institutional trading desks around the world is more expensive than the equivalent from Refinitiv.
/jlne.ws/39IfaVG

The Year Ahead for North American Equities
Adam Inzirillo – Cboe
With the first month of 2021 behind us, I want to share a preview of what Cboe’s North American Equities team has planned for the coming year. First and foremost, we will continue forward with our customer-first approach, which guides every decision we make and pushes us to create better trading solutions for you. While we have always prided ourselves on our pioneering spirit and innovative mindset, innovation will truly be front and center in 2021. We will continue to find new ways to solve your biggest roadblocks and advocate for initiatives that promote fair, efficient and transparent markets.
/jlne.ws/3riUQ3k

Analysis: GameStop saga expected to revive scrutiny of hedge fund industry
Pete Schroeder and Chris Prentice – Reuters
With hedge funds at the center of market drama for the second time in less than 12 months, the GameStop saga is likely to expedite a regulatory review of the ever-larger role non-bank firms play in the financial markets, regulatory experts said.Scrutiny of the non-bank financial sector was already expected to be high on newly appointed Treasury Secretary Janet Yellen’s agenda after hedge fund de-leveraging contributed toward turmoil in the U.S. Treasuries market in March 2020.
/jlne.ws/39HWt4o

GFF Summit: A cordial invitation and some valuable information
Frank Ghast – Eurex
I hope you are all safe and sound and that I will see many of you at Clearstream and Eurex’s joint Global Funding and Financing (GFF) Summit 2021 from Tuesday, 2 February, to Thursday, 4 February 2021 – even if, unfortunately, only virtually this year. In the ramp-up to the summit, let me take the opportunity to quickly recap 2020 and take a look at what’s ahead.
bit.ly/39koRtm

Save the Date – April 28 & 29
The Options Industry Conference is Going Virtual in 2021
Join OCC and the options exchanges for the 39th annual Options Industry Conference, April 28-29, 2021. While the conference will be held virtually for the first time in history, the focus will continue to be the key topics facing the options industry today, from the regulatory shifts in the U.S. and Europe to the technological developments that are driving monumental change in markets around the globe.
jlne.ws/2PPGgQh

High-speed traders reap windfall from retail investor boom; Value of the extra trading is expected to be widely shared by market makers
Eric Platt, Aziza Kasumov and Colby Smith – FT
The deluge of trading activity in US equities and derivatives markets is expected to produce a windfall for the high-speed market makers that execute orders for brokers such as Robinhood and Charles Schwab. Market makers including Virtu Financial, Citadel Securities, Susquehanna and Two Sigma look set to be among the enduring winners from the burst of activity driven by retail investors, even as the run-up in shares such as GameStop appears to be reversing.
/jlne.ws/3avRB1r

Benn Eifert Explains How Retail Trading Is Rocking Markets like Never Before
Tracy Alloway and Joe Weisenthal – Bloomberg
We know that retail activity, much of it on Robinhood, has been surging since last spring once the lockdowns began. But just how big of an impact is it really having? Is it going to be limited to just GameStop and a few others, or is this a permanent fixture of the new market landscape? We discuss this with Benn Eifert, CIO of QVR Advisors. Benn is an expert on volatility and derivatives, and he helps us make sense of what was so unique about GameStop, and what the ripple effects of this will be.
/jlne.ws/2LdGyS0

Zero-Commission Trading: From Hero to Zero
Jeff Bacidore – TABB Forum
The market structure for stock trading is scrutinized from every angle and has been for years. There’s a paper on everything, including one on the effect of zero commissions on market quality. In this article, Jeff Bacidore, President and founder of The Bacidore Group, unpacks a recent academic study that looks at how free trading has impacted the normal measures of a quality marketplace.
/jlne.ws/39OFwFP