The Highest Paid Grip in Chicago and Parts Beyond 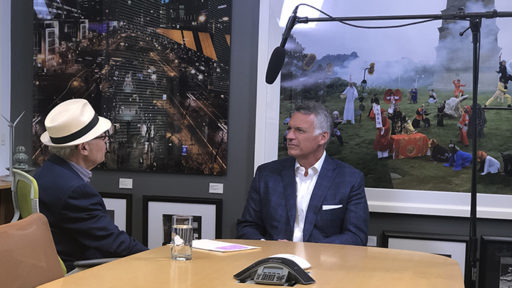 Friday I was the highest paid “grip” in Chicago as I helped drag JLN’s video and lighting equipment to the Wrigley building in Chicago on Michigan Avenue for a video shoot with American Financial Exchange CEO Richard Sandor and Wedbush Executive Vice President Robert Fitzsimmons. JLN Producer Mike Forrester did all the hard work on the shoot. I just helped schlep the equipment and listened intently.

The shoot was in preparation for the launch of Ameribor on August 16, 2019, which happens to be the 42nd anniversary of the launch of the most successful futures contract in the 20th century, the 30-year U.S. Bond futures at the Chicago Board of Trade. Sandor picked this date intentionally.

The geniuses behind that launch were then-CBOT Senior Economist Richard Sandor and his political counterpart, CBOT Chairman Les Rosenthal.

Sandor says he is more excited about the launch of Ameribor than any other futures contract he has been associated with, including the 30-year bond contract and even the carbon emission contracts. And he is right to be excited. This is the right contract at the right time, on the right exchange, with the right people behind it.

When Richard Sandor launched the bond contract, the only comparison for him was the launch of the Ginnie Mae. While the Ginnie Mae was successful in a sense, it was lost to history because of flaws in the contract that could never be overcome.

Sandor has learned a lot about how to build and launch new products since then. He even knows a lot about launching new exchanges.

With Ameribor, the AFX has partnered with Cboe Global Markets and their Cboe Futures Exchange, the CFE. The contracts belong to AFX but are traded on CFE.

The Ameribor contract concept was born from the beginning of the LIBOR scandal. Sandor and his team set about creating not just an alternative to LIBOR, but an American short term interest rate benchmark.

That benchmark is Ameribor, which has been specifically designed to eliminate any possibility of the structural problems that allowed the LIBOR manipulation to occur.

This will be an American benchmark for short term interest rates, something we should have had a long time ago. In an age when the UK is tearing itself apart and from its place in the EU community, why should business loans, mortgages, credit cards and other debt be priced to the London Interbank Offered Rate? Wouldn’t a rate built from real transactions from the type of small regional US banks that loan money for small, medium and large businesses be a better alternative? And those banks dot the U.S. in cities across the country.

Sandor has been indefatigable at the age of 77 in spreading the word about Ameribor. The man is full of experience and purpose and not to be underestimated.

These facts, the LIBOR scandal, and the need for a new product – one branded so well and created and launched by one of the most experienced, enthusiastic and brilliant futures industry leaders – make me nearly as excited as Richard Sandor.

It is 11 days until the launch of Ameribor futures on the CFE. Get ready.