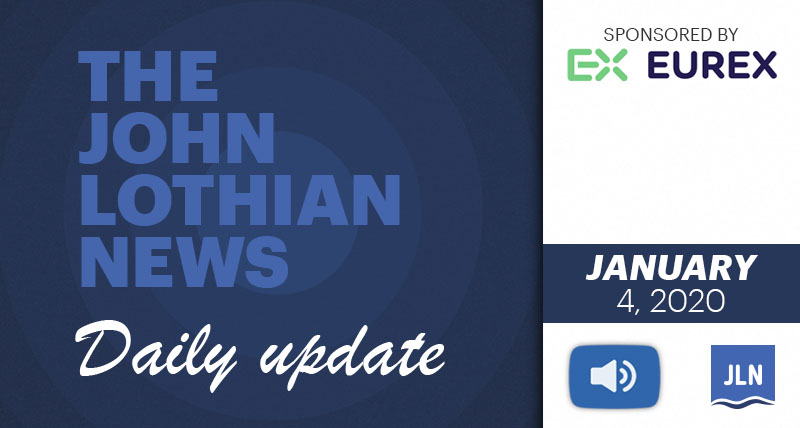 I hope you enjoyed the four-day weekend and properly welcomed in the year 2021. We at JLN wish you a Happy New Year. We shall always remember last year best, or at least with 2020 vision.

While we were popping champagne and wearing silly hats to welcome in the new year, bitcoin continued its ascent to new highs, trading over $34,000 in the early hours of January 3. The number of COVID-19 cases has also been on a tear, with a new high of 291K cases on January 2 and now over 85 million cases worldwide and over 20 million in the U.S.

In a first for JLN, we have a story from Casino.org about Eris Exchange pitching NFL futures contracts and targeting sportsbook hedging needs.

There are four disciplinary actions in Exchange News from the CME Group that are all related to shenanigans in the E-mini Nasdaq contract from 2018. All four did not answer the charges against them. All four were fined between $20K and $45K and banned for a period of one year from trading on CME-owned markets.

Congratulations to CME Group’s Jim Roper, who got engaged to Rev. Anna Ernst, a pastor at Epiphany Lutheran Church, which is two blocks from my home and where my son’s Cub Scout Pack was chartered and met.

There have been two new donations to the JLN MarketsWiki Education GoFundMe campaign. Robert Khoury and Steve Ivey have contributed. Rob is a longtime reader of JLN, starting with his days at GETCO. He is a busy man, including being the CEO of Agile Rainmakers, which he bills as a high-impact business development consulting and advisory firm that fine tunes business ecosystems for growth + profit. Steve Ivey is chief risk officer & executive vice president at Rosenthal Collins Group, a division of Marex Spectron. Thank you to Rob and to Steve and all who have given and all who have yet to give. Support our efforts to preserve industry history by donating to our GoFundMe campaign.

Kelly Loeffler’s Trumpian lurch shocks ex-colleagues at ICE; The former executive has reinvented herself to fight a tough challenge for Senate seat in Georgia
Gregory Meyer, Lauren Fedor and Philip Stafford – FT
Intercontinental Exchange is a $65bn pillar of the US corporate world, listing blue-chip stocks on its New York Stock Exchange and running the market that helps set the price of global crude oil. But the 20-year-old Atlanta-based company has become better known in political circles as the launch pad for Georgia’s Republican senator Kelly Loeffler, a former executive who joined ICE in its infancy and is married to the exchange’s chief executive Jeffrey Sprecher.
/jlne.ws/3odYpqd

*****Yes, there are shocked ex-colleagues both inside and out of ICE.~JJL

Stress test looms for financial system in 2021; Volatility rises as shadow banks become a bigger provider of liquidity to markets
John Plender – FT
Be warned. The global financial system in 2021 will face a gigantic stress test. This follows from one of the more important lessons that emerged from the coronavirus-induced market turmoil in March last year — a lesson that is worth revisiting.
/jlne.ws/3ogE0AM

*****I do not like the lead in this John Plender column at all. “Be warned.” If he really meant it, he would have used an exclamation point! Or, he should have made it a hashtag, #BeWarned. Or best of all, he should have put it in proactive language like, “Be prepared.” Be warned is just so sheep-like and passive. Let’s start 2021 by being proactive, not passive.~JJL

The Cost of Fighting the Count; Awkward questions for the companies that donated to senators planning to challenge the 2020 election results.
Andrew Ross Sorkin, Jason Karaian, Michael J. de la Merced, Lauren Hirsch and Ephrat Livni – NY Times
Any remaining notions that the presidential transition would go smoothly were shattered this weekend when 11 Republican senators announced that they would not certify Joe Biden’s Electoral College victory during a joint Congressional session on Wednesday. At the same time, President Trump pressured Georgia’s secretary of state to “find” enough votes to flip the state to him, on a Saturday phone call that was recorded. (That said, the prospect of a constitutional crisis hasn’t rattled markets: U.S. futures are up this morning.)
/jlne.ws/3oePN2y

*****How much money from ICE employees is going to Sen. Kelly Loeffler’s campaign? And what is her stand on the challenge to the January 6 Electoral College reporting to Congress? Those are questions that are going to be asked for senators like her and others who are supporting this challenge to Joe Biden’s election as president. Supporting a former colleague is admirable. Supporting insurrection is not. That is how this could end up being defined.~JJL

The Mutated Virus Is a Ticking Time Bomb; There is much we don’t know about the new COVID-19 variant—but everything we know so far suggests a huge danger.
Zeynep Tufekci – The Atlantic
A new variant of the coronavirus is spreading across the globe. It was first identified in the United Kingdom, where it is rapidly spreading, and has been found in multiple countries. Viruses mutate all the time, often with no impact, but this one appears to be more transmissible than other variants—meaning it spreads more easily. Barely one day after officials announced that America’s first case of the variant had been found in the United States, in a Colorado man with no history of travel, an additional case was found in California.
/jlne.ws/3pMeMuv

Thursday’s Top Three
Our top story on Thursday, December 31, 2020 was the Financial Times’ What did Silicon Valley’s crypto bubble create?, about the blockchain startup Filecoin and others. Second was Bloomberg’s Britain Budges on Derivatives in Last-Minute Brexit Relief, about the FCA altering its interest-rate swaps rules on a temporary basis for some European investment banks. Third was The Wall Street Journal’s HKEX’s New Big Boss Will Face Hong Kong’s Uncertain Future, as CEO Charles Li departs the exchange without a named successor.