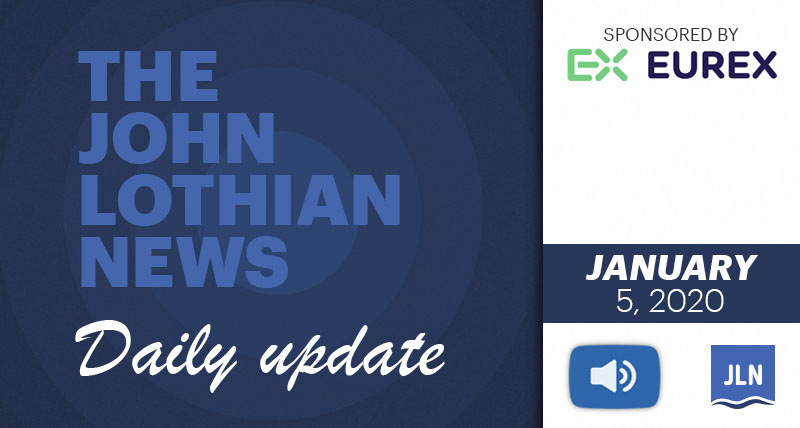 UK Prime Minister Boris Johnson has ordered a third lockdown for England due to the spreading of the COViD-19 virus. This was not done to distract from the changes occurring due to Brexit.

Sen. Kelly Loeffler announced during a rally with President Donald Trump that she will support the challenging of the Electoral College tally on January 6, joining some other rogue senators and congressmen who are also objecting. Also, Salon is reporting on a Loeffler campaign advertisement which noticeably darkens the skin of her opponent, Rev. Raphael Warnock. In-person voting began this morning for the election in Georgia.

Speaking of the Financial Times, they have published a report, “How to find happiness – a 7-point plan.” We could all use a little happiness right now.

The CME Group was not the only one with some eye-popping numbers. The OCC today reported it cleared a record-setting 7.52 billion total contracts in 2020 and its December volume was the highest monthly tally in OCC’s history, up 80.9 percent year-over-year.

It is good to be Danish. Customers at the Danish home-finance unit of Nordea Bank Abp can get mortgages with 20-year loans at a fixed interest rate of zero.

Rosenblatt Securities Inc. President Joseph Gawronsk is the latest to give to the JLN MarketsWiki Education GoFundMe campaign. Joe is a longtime JLN reader and friend, who swears he was not doing a contribution coordination with his Princeton friend Rob Khoury. Rosenblatt Securities is an institutional agency brokerage that offers investors a range of alternative execution techniques and is a thought leader in electronic trading of equities. Thank you to Joe and all who have given and all who have yet to give. Support our efforts to preserve industry history by giving to our GoFundMe campaign.

Travis Schwab, CEO of Eventus Systems, Inc., recently sat down for an “On the Brink” podcast episode. Topics included market structure, trade surveillance and the emergence of cryptocurrency exchanges. Click here to give it a listen.~SC

A Cure for Politicians’ Stock Trades; And it wouldn’t require legislation.
Andrew Ross Sorkin, Jason Karaian, Michael J. de la Merced, Lauren Hirsch and Ephrat Livni – NY Times
The recent controversy over stock trading by lawmakers like Senator Kelly Loeffler of Georgia, who avoided significant losses by selling some shares after key meetings early in the pandemic, revived concerns about how Congress polices its members’ portfolios. In his first column of the year, Andrew proposes a simple way to stop politicians’ trading in individual stocks.
/jlne.ws/3pWShDr

*****Equity options trading is hot. Here is your proof.~JJL

Slack Service Disrupted as People Return to Work After Holidays
Molly Schuetz – Bloomberg
Thousands of people reported being unable to access their Slack accounts Monday, when workers headed back to the virtual office after the holidays. According to the website Downdetector, which monitors service outages, more than 15,000 people complained of connection issues in places from Texas to Ukraine. “Down in my ‘home office,’” wrote one user on the site.
/jlne.ws/3b8gMcA

*****We had to revert to email to communicate among the JLN team.~JJL

New Covid variant will increase stress on global economy and widen inequality; Policymakers need to take more action to tackle rising risk that short-term problems will become embedded
Mohamed El-Erian – FT
As the new Covid-19 strain triggers tighter restrictions on economic activity and limits even more the movement of people, it has become increasingly clear that the road to vaccine-induced immunity will now have more potholes.
/jlne.ws/2XbzfN1

Why J.P. Morgan Created the Wall Street Bonus; At the turn of the 20th century, J.P. Morgan hit upon a new way to strengthen employee loyalty.
Stephen Mihm – Bloomberg
Bonus season has arrived, when bankers and traders take home a significant portion of their annual compensation in a single lump-sum payment. It’s Christmas on steroids — or so it can seem to workers outside of finance, most of whom have to make do with a fruit basket or other conventional gifts.
/jlne.ws/2XbWPcB

*****Why did JP Morgan create the Wall Street bonus?~JJL

Monday’s Top Three
The top story on Monday was from the Financial Times, Kelly Loeffler’s Trumpian lurch shocks ex-colleagues at ICE. The second most-read story was from Casino.org, Eris Exchange Pitching NFL Futures Contracts, Targeting Sportsbook Hedging Needs. And third was a feature on the new COVID variant, The Atlantic’s The Mutated Virus Is a Ticking Time Bomb