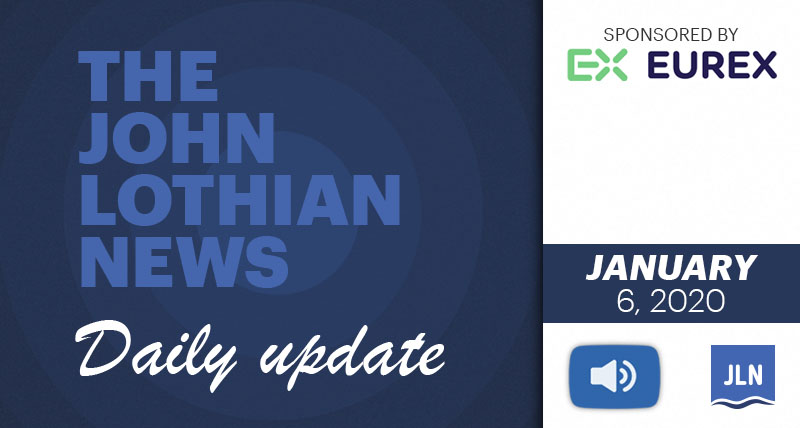 On the day after his wife lost her U.S. Senate race, Jeff Sprecher was given some solace as the stock price for his firm, Intercontinental Exchange, hit an all-time high price of $116.57. It was a Jerry Seinfeld like moment, where when something bad happens, something good happens to even it out.

On the day of tumult in the U.S. Capitol, the U.S. recorded the deadliest day of the pandemic to date with 3963 deaths reported. New daily death tolls were also set in the states of New Hampshire, Oklahoma and Pennsylvania.

Also, ABC is reporting “Members of Trump Cabinet discussing invoking 25th Amendment: Sources.” Invoking the 25th Amendment of the Constitution would remove Trump from the presidency.

Japan has declared a state of emergency because of the Covid-19 outbreak, and JPX has issued a statement that “Trading to Continue After the State of Emergency Declaration.” JPX said, “Trading on all markets of the Tokyo Stock Exchange, Osaka Exchange and Tokyo Commodity Exchange is scheduled to continue as normal on January 8 and beyond.”

The last time the U.S. Capitol building was breached was during the war of 1812, when it was burned down. And never, even during the Civil War, was the battle flag of the Confederate States of America waived inside the building.

Tom Scanlan, formerly of the CME Group, is the latest to give to the JLN MarketsWiki Education GoFundMe campaign. Tom is a longtime JLN reader who joined the CME Group as part of the acquisition of NEX Group, where he worked as part of the BrokerTec team. He also formerly worked for the Chicago Board of Trade, where he got his start on the recommendation of Lance Murdock, a CBOT board member. Thank you to Tom and all who have given and all who have yet to give. Support our efforts to preserve industry history by donating to our GoFundMe campaign.

The Futures Industry Association (FIA) issued a statement yesterday condemning the violence in Washington, D.C. as Trump supporters stormed the Capitol. It reads: “FIA strongly condemns the violence that took place today at the US Capitol and urges elected officials to unite in denouncing these actions. FIA firmly believes that the rule of law is the cornerstone of a free and democratic society and vehemently opposes any efforts to use violence to disrupt the peaceful transition of power guaranteed by the US Constitution.”~SR

Also, the FIA thanked all who donated prizes and supported its online auction in December. The auction raised £7,000 for Futures for Kids, the industry’s charitable foundation that raises funds to support disadvantaged children and young people in the UK and around the world. The top auction items were bottles of Chateau Palais Cardinal St-Emilion Grand Cru 2015, a week-long stay on the North Cornwall coast, and the perennial giant Toblerone chocolate bar.~SR

And, finally, FIA is hosting a webinar on “2020 annual trends in futures and options trading” on January 27 from 10:30 a.m. to 11:30 a.m. ET. The webinar will highlight the main trends in trading activity in 2020 in the global exchange-traded derivatives markets, with category and regional breakdowns as well as exchange and contract rankings. The moderator is FIA Senior VP of Publications, Data and Research Will Acworth. You can go here to register.~SR

Former Cboe Global Markets Chairman and CEO Bill Brodsky’s career in the financial industry spanned multiple decades and took him on a path from Wall Street to LaSalle Street. In a wide-ranging, two-part interview, he gave JLN an eyewitness view of the evolution of the options business, the exchanges and trading technology.

*****”We will always have the ICE stock price” – said with an accent reminiscent of the movie Casablanca.~JJL

Members of Trump Cabinet discussing invoking 25th Amendment: Sources
John Santucci, Katherine Faulders, Emily Shapiro, Johnathan Karl – ABC News
There have been discussions among some members of the Trump Cabinet and allies of President Donald Trump about the 25th Amendment, which would be a vehicle for members of the cabinet to remove Trump from office, multiple sources with direct knowledge of the discussions tell ABC News.
/jlne.ws/39e6NzG

Pro-Brexit campaign Leave.EU relocates to Waterford [Ireland]
Charlie Taylor – Irish Times
Leave.EU, a pro-Brexit campaign bankrolled by UKIP backer Arron Banks, has migrated its registered office for its website to Waterford so that it can retain its ‘.eu’ internet address. The move, first reported by the Euractiv website, comes as more than 80,000 .eu domain suffixes belonging to British users were recently suspended following Britain’s withdrawal from the European Union.
/jlne.ws/2L2jndz

Covid-19 Live Updates: U.S. Records Its Deadliest Day, With a Toll of Nearly 4,000
NY Times
As Americans were transfixed by the spectacle of the Capitol under siege, the coronavirus continued to sweep across the United States. Officials reported at least 3,963 new coronavirus deaths in the United States on Wednesday, a new single-day record, though delayed recording because of the holidays might have played a role. The daily death toll in New Hampshire, Oklahoma and Pennsylvania also set records.
/jlne.ws/3bj5AtM

*****In other news, there is still a pandemic raging and yesterday’s superspreader event in Washington, DC will only make it worse.~JJL

Mick Mulvaney resigns after Capitol siege: ‘I can’t stay’
Mark Moore – FT
Mick Mulvaney, former White House chief of staff and current special envoy to Northern Ireland, has announced he is stepping down. “I called [Secretary of State] Mike Pompeo last night to let him know I was resigning from that. I can’t do it. I can’t stay,” Mick Mulvaney told CNBC in an interview on Thursday.
/jlne.ws/2L0UJKh