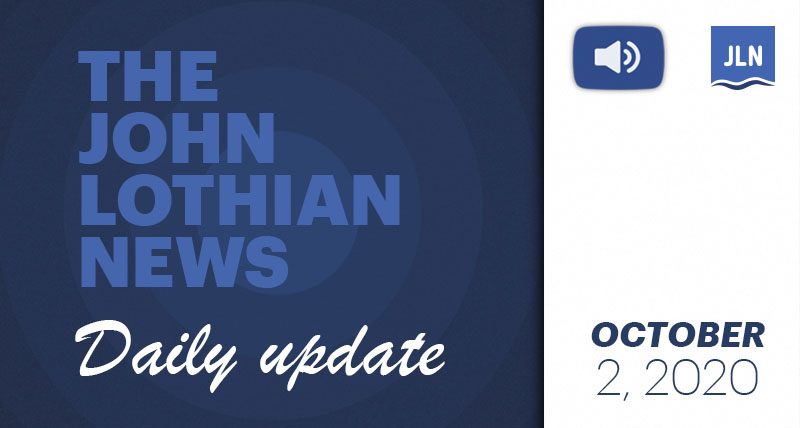 First things first, my prayers are for President Donald Trump and his wife, and all those who have contracted COVID-19, a quick and complete recovery. At the CFTC Technology Advisory Committee meeting on February 20 in Washington, DC, I predicted that President Trump would contract the virus. I also predicted Joe Biden and Bernie Sanders would too, so I am wrong there. Needless to say, I am sad to have been correct about this. I wish the virus on no one. I also had some more dire predictions I shan’t mention, but needless to say this will have an impact on the election just a month away.

Matt Leising of Bloomberg has a story about “Booming Decentralized Finance a Potential Haven for Money Laundering.” For me, there is no potential. My theory on the creation of Bitcoin is that it was created to be a more efficient way to launder money. Why would the money launderers not want to invest in a better way to launder money? Money laundering is the third largest business in the world. Now, there are also some good things that come along with the development of cryptocurrencies, but it should not be a surprise to us that money launderers are using these “markets” to move huge amounts of money. Some of the new innovations in DeFi have seen billions of dollars flow through in the first weeks. Who has billions to move like that? Think about it a bit, and at least some of the players have money laundering as their motive.

I admit my theory is a bit conspiratorial and out there, but for many whom I have shared it with it is more plausible than bitcoin being created by an anonymous Japanese inventor or group of inventors using the name Satoshi Nakamoto.

The Purdue Exponent, the student newspaper I once wrote for, has reported that “out of the nearly 30,500 tests the University has administered since Aug. 1, 900 of them have come back positive, according to Purdue’s coronavirus dashboard.” Purdue currently has 269 active cases and a 3.90% positivity rate over the last seven days.

We at JLN encourage you to get out and support Wall Street Rides Far this weekend. The event is now wide open to participation to all around the world, as Bryan Harkins shared with us in this video interview. You can sign up to ride and donate at http://wallstreetridesfar.org.

The Options Clearing Corp (OCC) has cleared a new annual options volume record in the “highest September ever” for the corporation. September 2020’s total cleared volume was up 65.7 percent from a year ago, at 670,994,045 contracts, bringing the total cleared contract volume to-date to 5,453,292,830 for 2020 and surpassing the annual volume record for the U.S. exchange-listed options industry. The previous record was 5.24 billion cleared contracts in 2018.~SR

Chicago-based alternative payments platform AeroPay this week announced the closing of a seed round to accelerate its growth. Terms were not disclosed. The round was led by Continental Investors, a private investment firm also located in Chicago that specializes in fintech firms, with a portfolio that includes the mobile payments platform LevelUp, acquired by GrubHub in 2018. For additional details, see the release. ~SC

There is some good news about industrial hemp production buried in PanXchange’s September 2020 report, Hemp: Benchmark and Analysis. Like last year, there has been a big jump this month in the monthly report of the number of planted hemp acres as the harvest progresses.

The amended report confirms that growers were not so disheartened by last year’s crop and this year’s prices that they were giving up on hemp. And the numbers weren’t so low as to make the long term commercial viability of field grown hemp look questionable.

The numbers, especially the fact that 11,000 acres of hemp for grain are now reported, also confirm an impression that field grown hemp is diversifying beyond the cash crop allure of CBD hemp. PanXchange suspects, though, that underreporting might be greater for CBD growers because they are more likely to be new to agriculture and less familiar with routine FSA reporting. Grain, seed and fiber farmers, they feel, are more likely to be experienced farmers diversifying their plantings into hemp.

PanXchange’s researchers attribute such increases in reported acres to the fact that farmers have simply not been aware of the reporting programs. In states operating under USDA approved plans, there is a clear requirement to report planted acreage to the Farm Service Agency. Hemp is a new crop, federal regulations are new, and coverage of hemp in FSA data is new.

Chicago-based Revolution Global took first place in 6 out of 7 categories in a recent “Peoples Choice” competition judged by more than 200 consumers. John Lothian News talked with Revolution COO Dustin Shroyer to get the details.

US regulators step up battle with spoofing; Heavy fine for JPMorgan is a warning sign to other banks
Philip Stafford, Kadhim Shubber and Eric Platt, Colby Smith and Laura Noonan – FT
Regulators have delivered a blunt warning to banks to clamp down on high-speed financial market manipulation or risk blockbuster fines and criminal convictions for staff. US authorities this week levied a $920m fine on JPMorgan Chase for eight years of giving a false impression of market demand in precious metals and US government bonds by rapidly entering and cancelling orders — a practice known as spoofing. The penalty far outstrips previous punishments for such misconduct.
/jlne.ws/2ESCinQ

*****”I shall not today attempt further to define the kinds of material but I know it when I see it.” -Justice Potter Stewart ~JB

The Stock Trading Revolution: How Robinhood and Its Rivals are Changing Markets
Sarah Ponczek and Katherine Greifeld – Bloomberg
It used to be difficult to trade stocks. Now it’s basically as easy as downloading an app or sending a tweet and what’s more, it’s completely free. Over the past year, there has been a revolution in how people can access the stock market. After a few companies started offering free trades, a move in late 2019 by one giant brokerage — Charles Schwab Corp. — to eliminate fees rippled through the entire industry.
/jlne.ws/3cP24Gd

*****One thing’s for sure – if 2020’s retail trading numbers keep up, especially retail trades from platforms like Robinhood, the options markets will never quite be the same.~MR

‘How to move to Canada’: Americans rush to Google after unwatchable debate
Poppy Noor – The Guardian
If you watched Tuesday night’s presidential debate thinking it was the height of civility, you’re probably in the minority. For many Americans, it was enough to trigger a potential mass exodus.
Trump plunges presidential debate into chaos as he repeatedly talks over Biden
Following a debate derailed by interruptions, people speaking over each other, and insults hurled back and forth, Google reported a peak number of searches for “How to apply for Canadian citizenship” in the US.
/jlne.ws/3nbo9n7

*****American politics are hard to escape. The U.S. has a lot of economic and cultural influence on the world, which is watching this election closely. Personally, I’d rather stay and fight for change.~MR

CryptoMarketsWiki Coin of the Week: Kin
After two years of litigation, a U.S. judge ruled Wednesday in favor of the SEC, which had submitted a motion for summary judgement. The motion said, “…I hold that undisputed facts show Kik offered and sold securities without a registration statement or exemption from registration…” Kik, the company that created a messaging app of the same name, as well as the digital token Kin, launched a public initial coin offering (ICO) for the coin in 2017. In 2018 Kik received an official notice that the SEC intended to prosecute the company for running an unregistered and unlawful securities sale.
/jlne.ws/33lDQAd

Thursday’s Top Three
Our top story Thursday was The Wall Street Journal’s Secretive High-Speed Trading Firm Hits Jackpot With TikTok, about Susquehanna International Group. Second was The New York Times’s A YouTuber Hangs His Own Shingle With an Auction Website. Third was Why Europeans no longer dream of America, from the Financial Times.