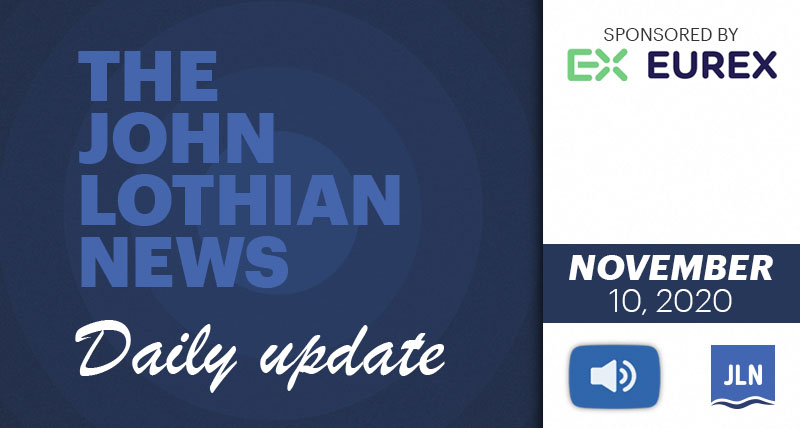 Today is the first day of FIA EXPO-V. EXPO is normally held in Chicago at the Hilton on Michigan Avenue. This year, it is being held in cyberspace and the FIA has put together a great program. As a reminder, I have some free passes to give away. Just email me at johnlothian@johnlothian.com and I will set you up.

The JLN team is being deployed across the EXPO-V program and will provide coverage of the different sessions and panels presented. If there are some speakers or industry leaders who would like to do a video interview after their panels with JLN, please reach out to me. We can conduct the interview over Zoom and publish it right here in JLN.

EXPO’s social events are normally the largest cocktail parties I ever go to, but this year we are keeping it safe. We will catch up soon enough. Enjoy EXPO and stay safe!

Nasdaq and a coalition of other exchange and trading platforms have put down a royal flush to the State of New Jersey’s pair of twos in the ultimate game of Texas holdem over the transaction tax controversy by agreeing to meet with Texas Governor Greg Abbott on November 20. New Jersey’s flop might just send their transaction tax plan down the river.

Moving the data centers to Texas would be a big blow to Wall Street and the East Coast, but would also mesh well with the huge data center business and technology hub in Texas. Austin in particular is an increasingly popular location for technology companies to locate, or co-locate.

The question is who will blink in this $10 billion game of Texas holdem, or better yet, Texas take them all in. Will New Jersey go all in, or fold their cards while they are still ahead?

Tom McCabe, former chief regulatory officer of OneChicago, is now a self-employed consultant. He is the CEO of Birdie Derivatives Consulting. McCabe also formerly worked for the CBOT, where he was a vice president of operations and quality assurance. He was one of those black coated people at the CBOT, who also happens to be one of the nicest people in the industry.

President-Elect Joe Biden would like to remind you that wearing a mask will save lives. Wear a mask!

There were no new donations to the JLN MarketsWiki Education GoFundMe campaign yesterday. We are just short of $15K. Who is going to take us over this number?

Miami International Holdings announced its trading results for October 2020 on Monday. The exchange group reports that it traded 73,320,613 options contracts, a 75.5 percent increase in options trade volume from October 2019, and an 83.5 percent increase in traded options average daily volume (ADV), which was 3,332,755. Volumes were generally down from September, but this was the case for the rest of the equity options industry as well.~MR

Illinois’ cannabis sales continue to roll higher, with October setting another monthly record with more than $75 million in adult-use sales. The state’s medical marijuana sales, which are reported separately, added $33 million, for a whopping total of about $108 million in combined sales for October. This may seem like Illinois-centric news, but politicians around the U.S. are clearly eyeing the trend given its potential for sales tax revenue. As JLN reported last week, voters OK’d the legalization of recreational and/or medical marijuana in all five states where it was put on the ballot on November 3. Illinois recreational sales data can be found here and medical sales were reported in this update.~SC

The Spread: Plenty of Options
JohnLothianNews.com

U.K. Sets Plan to Keep Up With New York as Financial Center After Brexit; Plan will review capital-raising requirements, boost green finance
Max Colchester and Simon Clark – WSJ
U.K. Treasury chief Rishi Sunak on Monday outlined a review of finance rules, including possible changes to make it easier for companies to raise money in London, aimed at keeping the country’s vast financial sector competitive with New York after Brexit. Over the past two decades, London cemented its position as a global financial-services launchpad in part because, once given a license by U.K. authorities, its banks, insurers and clearinghouses got automatic regulatory clearance to sell to clients across the European Union’s other members.
/on.wsj.com/3keXWkH

*****Is the UK going to move its server farm out of the London exurbs too by applying a transaction tax?~JJL

23,000 households reported income over $10 million last year. The IRS audited seven
Michael Hiltzik – Los Angeles Times
Since we’ll be spending the next day or so pondering America as it is and as we wish it to be, let’s take a moment to contemplate how tax avoidance and evasion have become facts of life for some of the richest Americans.
/lat.ms/3ltHRtb

The Man Who Could Explain the $2 Billion Wirecard Mystery Is Missing; The company’s failure in June stunned Germany. And a key player has vanished.
Eyk Henning, Benedikt Kammel – Bloomberg
On a cool Saturday evening in March, Jan Marsalek headed across Munich for dinner at the home of a friend. It was a welcome respite for the chief operating officer of German payment processor Wirecard AG, as the previous few weeks had been particularly exacting. Allegations of accounting fraud at the fintech company were growing louder, and the press, auditors, and even Wirecard’s board wanted answers—from Marsalek. The small group, including a Russian diplomat, dug into a barbecue spread washed down with ample amounts of vodka, and by the end of the evening Marsalek had consumed two bottles by himself. Then things got weird.
/bloom.bg/3lj4mR8

*****This is no big deal. We are still looking for Jimmy Hoffa.~JJL

Corporate Tenants Dump Excess Office Space, Sending Shivers Through the Market; They offered a record 42 million square feet in the second and third quarters
Peter Grant – WSJ
More companies are looking to dump excess office space by renting it out to new tenants, flooding the market with additional supply that could depress U.S. office rents. With many employees planning to keep working from home for the foreseeable future, big corporate tenants in city centers say they have a surplus of office space. Most of those companies are locked into long leases of as long as 20 years and have little opportunity to get out of these agreements.
/on.wsj.com/3eLgsjR

*****A lot more shivers are coming. Commercial real estate is being Zoomed.~JJL