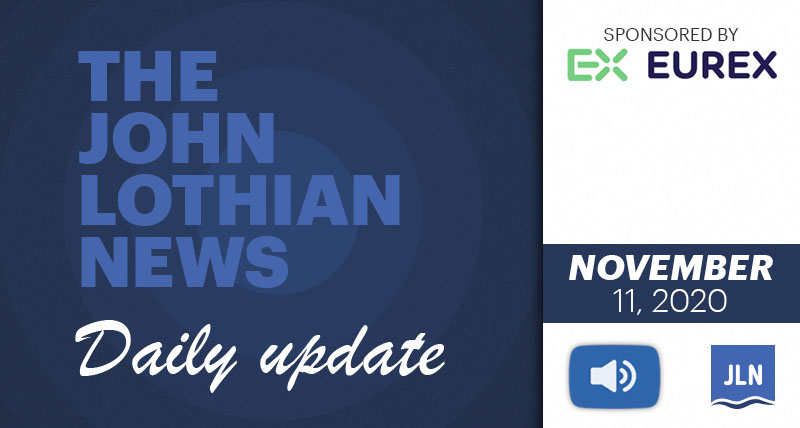 Today is Veterans Day in the U.S. and there are similarly themed remembrance days around the world. Veterans Day honors all those who have ”served the country in war or peace — dead or alive — although it’s largely intended to thank living veterans for their sacrifices.” It is important to remember these sacrifices for us as the election we just had would not have been possible without the sacrifices of veterans.

Take a moment today at 11 AM and 11 minutes and 11 seconds to remember the U.S. veterans for whom we are greatly in debt too.

FIA EXPO-V is off to a good start. Heath Tarbert made everyone hungry with his descriptions of regulatory steak and brisket. CME Group Executive Chairman and CEO Terry Duffy gave a shout out to Nasdaq’s CEO Adena Friedman and a boost to their collaborative water futures product and gave an explanation of why a transaction tax could move CME and other exchanges to Dallas, TX. He also offered his support for the need for diversity in organizations like the CME Group and why it is the right thing to do.

In a story about how Sen. Kelly Loeffler bought a jet to take advantage of a Trump tax loophole to write off the cost of the airplane, there is a tidbit that she and her husband, ICE Chairman and CEO Jeff Sprecher, appear to have put their Atlanta home on the market this past July with a $19 million asking price.

Let me state unequivocally that lying is wrong. Also, supporting a lie is wrong, even if you think it furthers your political career. Lying should not be normalized by mass support for a lie. Do the right thing. Don’t lie or support lies.

There were no new donations to the JLN MarketsWiki Education GoFundMe campaign yesterday. That is the first time we have had two days in a row during the week without a donation. We are just short of $15K for the campaign to raise $300K. Help support our efforts to preserve industry history with a donation to the GoFundMe campaign.

There was a massive thunderstorm across the middle part of the U.S. yesterday, including Chicago, right about 5 PM last night. It would have made for a very wet FIA EXPO cocktail party experience had we held an in-person event this year.

The oak tree in my front yard dropped 99% of its leaves, or they were ripped off by the almost tornado-like winds we had yesterday. Normally this tree drops its leaves in December. I think the six weeks of dry weather we had in the late summer has influenced this.

In what is likely to be his last FIA Expo address as chairman of the CFTC, Dr. Heath Tarbert spoke for about half an hour on Tuesday morning at this year’s conference which, of course, is being Zoomed around the world. Tarbert, never straying far from his own role at the commission, presented a thirty-minute campaign speech.

In “the most uncertain times in the world,” CME Group CEO Terry Duffy does not appear to be fazed by the potential threat of a short selling ban or a financial transaction tax, nor by the volume drop in the CME’s interest rate complex this year. In an interview with Walt Lukken at FIA Expo-V, he also seemed unsurprised by the results of the presidential election.

Climate change and its attendant issues are often characterized by contentious debate.

That was not the case at the FIA Expo-V seminar, Managing the Risk of Climate Change: The Role of Markets, moderated by Athena Eastwood (Partner, Willkie, Farr & Gallagher).

FIA Expo – SEC’s Peirce Upbeat on Future of Bitcoin ETFs, Urges Crypto Safe Harbor
Suzanne Cosgrove – John Lothian News
SEC Commissioner Hester Peirce reiterated her often-expressed free market stance toward the cryptocurrency markets Tuesday, saying the industry has been developing at a dramatic pace and the regulatory pace has not kept up.
To read the rest of this report, go HERE.

Nasdaq CEO Adena Friedman said Tuesday that while the story of 2020 has been one of uncertainty, beginning in March with the pandemic and continuing with the U.S. presidential elections, she was proud of the way the exchange industry has risen to the challenge.

To read the rest, go HERE.

*****Marex continues to make its move.~JJL

Donald Trump’s dangerous election reversal game; There is no evidence to overturn Joe Biden’s presidential victory
The editorial board – FT
The longer Donald Trump refuses to concede the US presidential election, the more he damages American democracy. The fact that Mr Trump lost last week’s vote is not in serious dispute. His opponent Joe Biden looks to have won 306 electoral college votes — 36 more than needed to take the White House. Yet Mr Trump is insisting on branding this as a “stolen election”. Many senior Republicans, including Mitch McConnell, the Senate majority leader, are rashly indulging the US president’s bruised ego.
/on.ft.com/3lnTqln

*****Lies, damn lies and made up statistics.~JJL

Covid Superspreader Risk Is Linked to Restaurants, Gyms, Hotels
Kristen V Brown – Bloomberg
Mobile phone data used to model how mobility impacts infection; Movements of 98 million people mapped along with case growth
The reopening of restaurants, gyms and hotels carries the highest danger of spreading Covid-19, according to a study that used mobile phone data from 98 million people to model the risks of infection at different locations. Researchers at Stanford University and Northwestern University used data collected between March and May in cities across the U.S. to map the movement of people. They looked at where they went, how long they stayed, how many others were there and what neighborhoods they were visiting from. They then combined that information with data on the number of cases and how the virus spreads to create infection models.
/bloom.bg/2UhUxqY

******Superspreader events will dominate the next couple of months. Thanksgiving in the U.S. is one, holiday parties in December is another, with Christmas and Hanukkah next. New Year’s is another and so by inauguration day in the U.S. you could have 300,000 new cases a day potentially if no mitigation steps are successful. That is my guess, only. This is my worst case scenario. Or maybe my worst case scenario I am willing to share publicly. ~JJL

Covid-19 Surge Strains Hospitals Once Again; Hospitals could face greater challenges than earlier this year, as coronavirus surges widely and hits rural regions where resources are scarce
Melanie Evans – WSJ
Hospitals across the nation face an even bigger capacity problem from the resurgent spread of Covid-19 than they did during the virus’s earlier surges this year, pandemic preparedness experts said, as the number of U.S. hospitalizations reached a new high.
/on.wsj.com/36oZ2pf

*****Wear your masks. Regularly use hand sanitizer. Stay away from superspreader venues and events.~JJL

Finalists of the Deutsche Börse Photography Foundation Prize 2021 announced;The four finalists of the Deutsche Börse Photography Foundation Prize 2021 are Poulomi Basu, Alejandro Cartagena, Cao Fei and Zineb Sedira
Deutsche Börse
For the renowned annual award, which will celebrate its 25th anniversary in 2021, artists and projects are nominated who have made an important contribution to photography in Europe in the previous twelve months. This year’s shortlist features four unique artists whose bold and far-reaching projects cover geographic areas from Algeria to China and address issues of both local and global importance.
/bit.ly/3ePo6K3

*****One of my goals is to win this contest. Or to almost win it. Or, to get honorable mention. Something.~JJL

Tuesday’s Top Three
Our top story Tuesday was Bloomberg’s The Man Who Could Explain the $2 Billion Wirecard Mystery Is Missing. I look forward to this episode on “Unsolved Mysteries.” Second was the Los Angeles Times story, 23,000 households reported income over $10 million last year. The IRS audited seven. Why does it seem the IRS calls me if I am off by $5? Third was The Wall Street Journal’s Popular Trading Platforms Sideline Users With Technical Difficulties as Stocks Surge. This must be a corollary to Murphy’s Law. Not only do things go wrong that can go wrong but they do so at the worst possible moment.