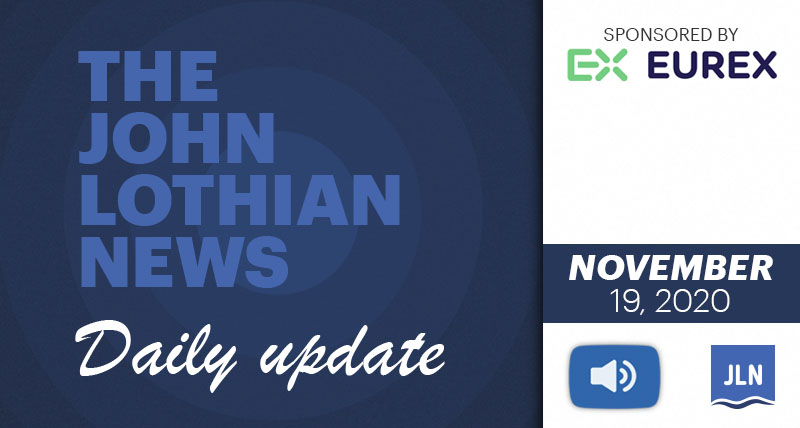 I have been negligent in reporting that David Prosperi has retired from the OCC. He took a package that was offered this summer for employees with certain tenure who were a certain age. He will be replaced by Michael Shore, whom Prosperi brought on earlier this year as a transition plan. Prosperi has worked for four major financial institutions in Chicago: the CBOT, CME, Aon and the OCC. He got his start with Superior Oil in Washington, DC as an intern during grad school. He later worked on the Reagan presidential campaign in 1980 and then landed a job in the White House as assistant press secretary, working under James Brady and Larry Speakes. He also later worked in the Department of Energy and the Department of the Interior. He lived for a while in Elmhurst, IL, not too far from where I live now. Prosperi was hired by Craig Donohue at the CME and OCC, and he helped transform the OCC into an industry thought leader. He was hired by the CBOT following the FBI investigations of the late 1980s into the Chicago markets. He was one of the very best communications professionals I have ever dealt with and have valued collaborating with him over the years. He will be taking some time to relax and then maybe take on some consulting roles. He has earned the time off.

Please consider a donation to Covenant House. The good people at Wedbush in Chicago have a team and are trying to raise $10,000. They are 25% to their goal. Covenant House helps homeless youth by giving them the resources to transition from homelessness to independence.

Newsweek has an article titled “Trump Can Still Win In Armageddon Scenario for Markets, JP Morgan Warns” that I am too afraid to even read.

The McLean County Clerk in Illinois, Kathy Michael, is a former employee of a firm of which I was a part owner. We fired her for commodity fraud reasons, including submitting fraudulent customer documents and misallocation of trades in different customer accounts. She is a Republican elected official in this Illinois county. As county clerk, her office was responsible for the election in McLean County. My partners and I met her when we worked together at Gerald Commodities. After I left, I went to a firm Bud Frazier formed. He had also left Gerald. After Bud died nine months later, I and a couple of his long time associates hired Michael at The Frazier Associates after she left Rand, which Gerald was renamed after it was sold to a customer, Monroe Trout. Michael had difficulty finding a job as a broker after that as her reputation with us spread among industry compliance departments. She eventually had her son (David Alan Michael) front a firm, The Michael Group, as the principal, with her working in a non-registered role to avoid the impact of her reputation. We at Frazier were contacted by the CFTC about a fraud investigation into The Michael Group. After the CFTC interviewed her son about the allegations, he committed suicide, the CFTC told us. The CFTC subsequently dropped the case and we never heard anything more about it or her. I guess there are second chances in life.

Justin Wolfers of the New York Times has a commentary titled “Postpone Thanksgiving and Save Hundreds of Lives.” I concur. Postpone. There is nothing special about the day. We want to be thankful, not regretful.

There were no new donations to the JLN MarketsWiki Education GoFundMe campaign yesterday.

Correction: The American Financial Exchange, The University of Chicago Law School and the Becker Friedman Institute on Thursday, December 3 at 12pm CT/ 1pm ET will host a webinar featuring Kathy Kraninger, Director of the Consumer Financial Protection Bureau (CFPB). Director Kraninger will be speaking on “CFPB’s Response in the Age of Covid-19.” Click here to register: Note: This event is closed to the media.

Attorneys for Cedric Chanu and James Vorley filed motions last week for acquittal or, failing that, a new trial. Chanu and Vorley, former metals traders at Deutsche Bank, were found guilty by a jury in September of multiple counts of wire fraud related to spoofing. Among other things, the defendants’ motion for a new trial claims that the jury verdict was coerced due to the special circumstances caused by COVID-19. Three jurors were excused from service on the last day of arguments because one of them reported having COVID-19 symptoms. During jury deliberations, the remaining 11 jurors were directed several times by Judge John J. Tharp, Jr. to continue deliberating despite jury reports that they were deadlocked. Late on Friday afternoon, the jury returned their mixed verdicts of guilty on some counts and not guilty on others. The defense notes that the jury members who did not believe the defendants to be guilty would have felt pressure to change their votes in light of the threat of their own or other jurors’ catching COVID-19 either in the courthouse or in transit. The Department of Justice has until December 11 to file a response. ~Thom Thompson

The STA Foundation plans to honor several industry execs with a Big Heart for Charity Award on December 1. Among them is Bryan Harkins, EVP and head of markets at Cboe Global Markets for his fundraiser Wall Street Rides FAR. The cycling charity has raised nearly $2 million for the Autism Science Foundation over the past five years. Other award recipients are Franciso Manuel of the Man Group and Zach McClanahan of Dash Financial Technologies. Ticket information for the virtual event is here. ~SC

David Prosperi retires from OCC
Securities Finance Times
Options Clearing Corporation’s (OCC) David Prosperi is set to retire as senior vice president, communications, as of 13 November, after just under six years with the equity derivatives clearinghouse. He will be replaced by Michael Shore who joined OCC in January. Shore is leading the communications function and reporting to Julie Bauer, who oversees the entire OCC external relations team.
/bit.ly/3lNrojl

*****I interviewed David Prosperi over Zoom about his career and we will have this interview next week. An interesting note, he was with President Reagan the day Reagan was shot in Washington, DC in 1981. More details are in the interview. Stay tuned.~JJL

America Just Can’t Get Enough Lysol; Despite record-breaking, around-the-clock production, the disinfectant still vanishes from store shelves in a matter of hours—even before the latest Covid spike.
Drew Armstrong – Bloomberg
One of America’s most recognizable icons of fresh-scented cleanliness comes from New Jersey. No matter where U.S. shoppers are lucky enough to spot cans of Lysol, the sanitizing spray was almost certainly produced at the same sprawling, tan-colored factory, in a suburb an hour’s drive from New York City. Over the noisy plant’s concrete floors, a steady stream of empty cans clink through an assembly line, waiting to be filled. On the line, a machine packs them all with a blend of ethanol, another disinfecting chemical called a quaternarylan ammonium compound, or quat, and some scent. Employees call the mixture the Juice.
/bloom.bg/3nDIlgR

*****To clean with, not to drink. Although when I was a kid I once tried drinking floor cleaner or floor wax, I can’t remember exactly. I had my stomach pumped. It was not fun.~JJL

Ponzi Scheme Suspect Uses Underwater Scooter to Flee F.B.I.; After a chase, Matthew Piercey disappeared underwater using a submersible scooter, the authorities said. When he surfaced, agents were waiting with dry clothes his wife had provided.
John Ismay – NY Times
When the authorities went to arrest Matthew Piercey on Monday for what they said was his role in running a $35 million Ponzi scheme, he took off in his truck and led them to Shasta Lake, the largest man-made reservoir in California.
/nyti.ms/3kIQizy

*****This would have made great fodder for the late Bart Chilton’s Ponzimonium book.~JJL

Bill Gates says in-person meetings aren’t the ‘gold standard’ anymore and that 50% of business travel will go away even after pandemic
Avery Hartmans – Business Insider
The sweeping changes we’ve seen this year to office work and business travel won’t go away, even after the pandemic subsides, according to Bill Gates. Gates described how he envisions the future of work during an interview with Andrew Ross Sorkin at The New York Times DealBook conference on Tuesday. According to Gates, one of the biggest changes to how business is conducted will have to do with work-related travel.
/bit.ly/36SiyKT

***** I meant to share this yesterday. It has great insight.~JJL

Zoom will lift its 40-minute time limit for free meetings on Thanksgiving Day
Marika Gerken – CNN
The holidays are upon us and one tech company is already in the giving spirit. Zoom announced it will lift its timed meeting limit on Thanksgiving so “your family gatherings don’t get cut short.” The video communications company announced in a tweet that the 40-minute time limit it usually has on its free meetings will be lifted globally on November 26 (Thanksgiving Day).
/cnn.it/2KfL55y

******That is perhaps the smartest marketing move of the year.~JJL

Racism Impoverishes the Whole Economy; While the targets unquestionably suffer the most, denying people equal opportunities diminishes the finances of millions of Americans.
Lisa D. Cook – NY Times
Discrimination hurts just about everyone, not only its direct victims. New research shows that while the immediate targets of racism are unquestionably hurt the most, discrimination inflicts a staggering cost on the entire economy, reducing the wealth and income of millions of people, including many who do not customarily view themselves as victims.
/nyti.ms/2IJA8ci

*****This is something I have said for a long time. When we hold people back from their God-given potential by discriminating against them for whatever reason, we are hurting all of us and our economic, scientific and societal growth. Just remember to love other people. Love is love!~JJL