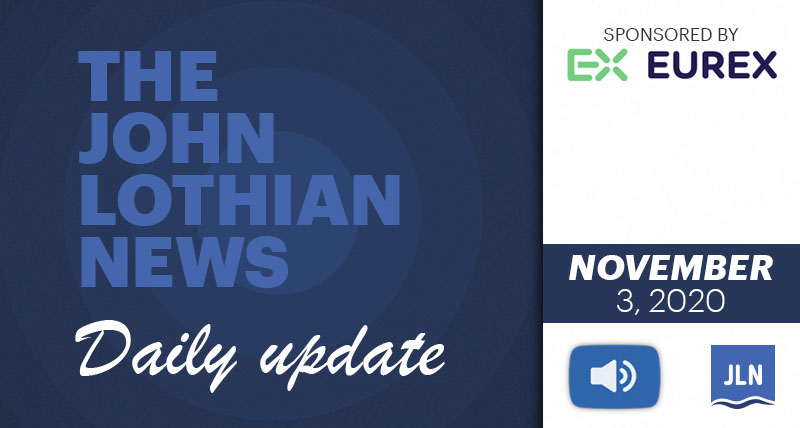 The U.S. Presidential election is today, along with the election of senators and representatives. If you are registered to vote, and have not voted, please be careful and safe and go out and vote. Democracy works best when everyone who is eligible can vote.

It was 100 years ago at the 1920 election that women first had the right to vote in the Presidential election. The number of voters went from 18.5 to 26.8 million votes. Over 100 million people have already voted in this election. Let’s make it a record turnout.

The Chicago Tribune is reporting that my home state of Illinois has set a new record for coronavirus cases three days in a row. So we have that going for us.

A Bloomberg story says working from home makes us less creative. There is a loss of collaboration from not being able to share a conversation at the coffee station, but creativity can happen anywhere. Some of my best creativity happens while I am sleeping, or better put, trying to sleep.

We had two new donations to the JLN MarketsWiki Education GoFundMe campaign yesterday. One was from Peter Mulmat, the chief commercial officer of the start-up Small Exchange. The other was from Cargill Investor Services and CME Group alum Tony Drake, who is now with Phillip Capital. Thank you to Peter and Tony, to all who have given and all who have yet to give. Support our efforts to preserve industry history by donating to our GoFundMe Campaign.

Correction: In our most recent Week in Review email, the link to the Staff Pick, “Peter Wind Remembrances” was incorrect. The correct link is HERE.~SR

The election today is, perhaps unsurprisingly, boosting the cryptocurrency betting markets; the trading volume for the decentralized betting platform Polymarket went from zero to over $3 million in just a few weeks. As of yesterday, a bet called, “Will Trump win the 2020 U.S. presidential election?” had about $2.8 million of bets placed on it – at time of writing, it has over $3.3 million. “No” appears to be the most popular bet. Each bet costs a dollar to make. Another platform called YieldWars opened a similar bet last night – it reportedly has about $50,000 worth of bets at time of writing.~MR

The Money Says Prepare for a Long Night, and Week; Market-based models suggest the U.S. election is far tighter than polls would indicate.
John Authers – Bloomberg
This is a blissful moment; I am about to write my last ever piece about the U.S. elections of 2020 without the benefit of hindsight. More or less everything seems inevitable once it’s happened. From here, nothing looks inevitable. Any number of strange phenomena may turn out to be important, or may soon be forgotten. So, while the U.S. elections remain like a Whodunnit novel that is missing its last page, let me try to review what is going to happen Tuesday and the rest of the week.
/jlne.ws/3mKFzGb

******Comfort food is a good thing for times like this. We are having Lou Malnati’s pizza tonight.~JJL

Indians crack coconuts and pray for Kamala Harris in US election; Apprehension is mounting in Chennai, the hometown of the vice-presidential candidate’s mother
Stephanie Findlay and Sreshtha Tiwari – FT
If prayers could win a US election, Indians would give Kamala Harris the edge. To secure victory for Joe Biden, the Democratic presidential nominee and his running mate Ms Harris, the daughter of an Indian mother with roots in the southern state of Tamil Nadu, locals are taking no chances when it comes to the gods.
/jlne.ws/3kX5R7I

******Coconuts are not on my list of comfort foods.~JJL

How to Dress for the Apocalypse; The characters in end-of-days films like “Children of Men,” “The Road” and “Snowpiercer” dress quite a lot like we do now. That should really make us worry
Jacob Gallagher – WSJ
Most apocalyptic movies play out like this: First humanity falls, then the sweaters get torn. OK, maybe it’s not quite that simple. But in nearly every catastrophic film of the past few decades—from 1997’s corny clunker “The Postman” to 1999’s hallowed chronicle “The Matrix,” to the sorta-schmaltzy, sorta-stirring “Hunger Games” trilogy (2012-2015)—hole-ridden, wholly beaten-up sweaters have served as the foundation for the character’s costumes.
/jlne.ws/3kZT5W4

*****I am not sure why the Wall Street Journal decided to publish this story on the day of the U.S. Presidential election, but I am guessing they had their reasons.~JJL

Reuters equipping journalists with gas masks, flak jackets for elex coverage
Louis Casiano – Fox News
Reporters for Reuters covering the elections in the U.S. will have protective gear in anticipation of protests after several incidents in which journalists were targeted during summer demonstrations.
/jlne.ws/328IXCC

*****Perhaps the story just above this one is related somehow to this story. This is not something I ever thought I would see in this country. ~JB

Monday’s Top Three
It’s election day and fittingly our top story Monday was Nate Silver’s I’m Here To Remind You That Trump Can Still Win, at FiveThirtyEight. Second was CNN’s What we can learn from 1918’s deadly second wave. Let’s hope we can learn something. Third was John Lothian’s The Mega-Macro Event That Upsets Everything Everywhere, from JLN.