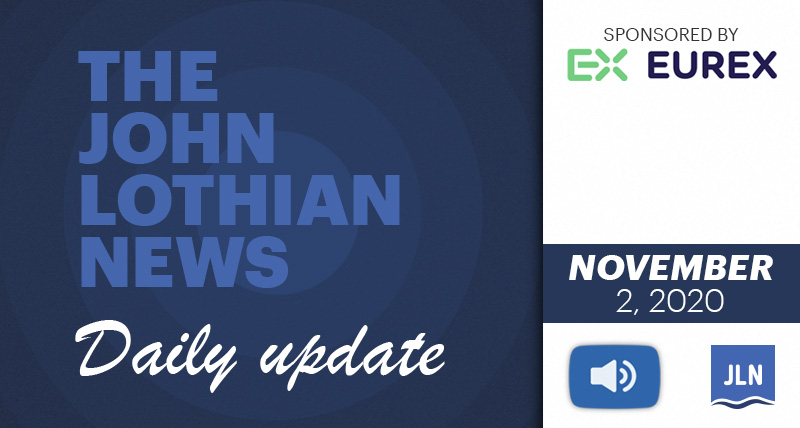 Lynne Marek has exited Crain’s Chicago Business. The longtime Crain’s senior reporter covered the financial services and higher education sectors for the publication, but had covered media in the past too. Her stories, carried in JLN, were often the most highly read stories of the day. We wish her well with her next endeavors.

Crain’s Senior Reporter Steve Daniels, who has been with the publication for 25 years, will take over the financial services beat until a long-term plan is
executed. Daniels currently covers banking, insurance and utilities. Daniels can be reached at
sdaniels@crain.com. His Twitter handle is @stevedaniels27.

The Wall Street Journal has a video titled “Options Trading Is More Popular Than Ever Despite the Risks.” Does this mean the options trading boom is over?

The OCC reported November 2020 total volume was up 71 percent from a year ago, which was the highest November ever and second-highest month on record.

The Facebook-Backed Libra Association has changed its name to Diem, Bloomberg reported. 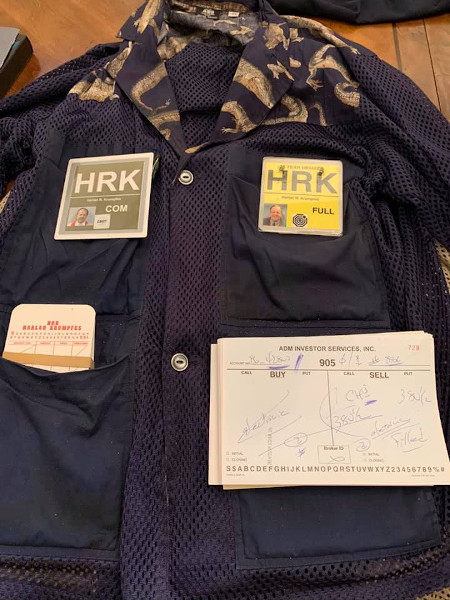 Here’s a feel-good story by Austin Krumpfes he told on his late father’s 83 birthday:

The attached photo is Harlan Krumpfes’ trading jacket from the CBOT, where he was a member for 45 years (grain room). Unbeknownst to Austin and the rest of Harlan’s family, this jacket had been hanging in the coat room ever since his last day on the floor (November 24, 2014, according to the order time-stamps in his pockets). Apparently Harlan hung his jacket up there that afternoon just like he did every day for decades, not knowing at the time that it was to be his last day on the floor. When Harlan passed away earlier this year, the news apparently made its way back to the coat room. Somebody there remembered him, and knew that his jacket was still hanging there in case he ever returned to the floor. Upon hearing the news, that person called Member Services, who gathered up the jacket and a few other items that they found of his, tracked down the Krumpfes family, and then insisted upon hand-delivering them to their home. It totally blew them away when that “time capsule” of his jacket and other mementos showed up. That is a class move by the Member Services staff.

International cooperation was the watchword from Loh Boon Chye, CEO of the Singapore Exchange, a keynote speaker at FIA Asia-V, who said that a month after the U.S. presidential election there is renewed commitment to multilateralism and international cooperation, and a sense of optimism in the air. The recent signing of the Regional Comprehensive Economic Partnership (RCEP), a free trade agreement between Asia-Pacific nations, puts Asia in a prime position for a new normal, he said.

There are more than 40 countries in Asia, which is “now more than just about competition between China and the U.S.,” he said. “Dynamics and nuances between Asian countries will become more important in a post-COVID, RCEP world.”

The exchange’s SGX FTSE Taiwan Index Futures contract is “among the most successful product launches” and adds to the exchange’s index partnership with FTSE Russell, the fastest liquidity builder of any contract, he said. (Trading in that contract exceeded US$1.5 billion during launch week.) He also touted the SGX Nikkei 225 futures, launched together with the CME, as one of the earliest exchange linkages.

“The challenges of our time require us to come together as a community with a common objective,” he said. One of those challenges is the environment, where there has been a “global awakening.” Asia’s weight in the global economy today can make a decisive impact on climate issues, he said. “Singapore has been one of the few countries to introduce a broad-based carbon tax, and is working on a long term carbon strategy that will define Singapore as an international center. China too has made climate change a priority.”

Many challenges remain, such as standardization, he said, but “where there’s a will there’s a way. Together we can create real impact. Only then can we look back at this moment as Asia’s opportunity to define the decade.” ~SR

The OCC’s cleared volume for November was 677,190,590 contracts, its second-highest month ever. I wonder if someone at the OCC has started ringing a little bell every time they beat their own record? It’s happened a lot this year. ~MR

In the first panel at FIA’s Asia-V 2020 Expo, exchanges in the Asia-Pacific looked back at their successes during a turbulent year and ahead toward opportunities for cooperation in 2021.

During the unprecedented uncertainty of the past year, Asia-Pacific markets responded with innovation, and the exchanges are thriving, said Ian Nissen, the moderator of the panel.

With a pedigree that includes a Ph.D. in economics from Stanford University and a five-year stint as an investment officer at the World Bank, it is not surprising that the vice chairman of the China Securities Regulatory Committee is a proponent of the opening of China’s markets.

In his position at the CSRC, Fang Xinghai oversees both China’s futures and stock markets, and also is responsible for corporate finance. Interviewed by FIA President and CEO Walt Lukken on the first day of the FIA Asia Conference, Xinghai said the pandemic, “if anything, has accelerated the development of China’s capital markets.”

“Never let a good crisis go to waste.” This quote by Winston Churchill (or former Chicago Mayor Rahm Emmanuel, depending on who you ask) was brought up by Stella Gan, the FIA’s head of operations for the Asia-Pacific region on the first day of FIA Asia-V, as speakers from all over the derivatives industry discussed via Zoom how the industry has adapted to the “new normal” in the wake of the coronavirus pandemic.

The panelists echoed many of the themes about industry resilience during the March markets meltdown that have become familiar. The panelists agreed that while they were not expecting the volatility, they were nonetheless pretty much prepared for it. There were some hiccoughs early on but those were more closely associated with adapting to work from home than financial issues.

David Prosperi has had a long career in public relations in the markets and politics. John Lothian interviewed Prosperi over Zoom about his career and the events that saw him move from national politics to the White House and to jobs at the Department of Energy and the Department of the Interior. He was later recruited to join the CBOT to work with CBOT CEO Tom Donovan and entered the world of markets, where he remained the rest of his career. He worked for the four biggest and most important financial giants in Chicago: the Chicago Board of Trade, the CME Group, Aon and the OCC. The interview includes stories of being with President Reagan the day he was shot, working with a soccer club in the Premier League to tell their business story, and helping turn the OCC into an industry thought leader. Here is our interview with David Prosperi.

OCC November 2020 Total Volume Up 71 Percent from a Year Ago; Highest November ever and second-highest month on record
OCC
OCC, the world’s largest equity derivatives clearing organization, announced today that November 2020 total cleared contract volume was 677,190,590 contracts, up 71 percent from November 2019. This marks the highest November ever and the second-highest month on record. Year-to-date average daily cleared contract volume through November was 29,295,206 contracts, up 48.4 percent from November 2019.
/jlne.ws/36sYkZs

The Future of Finance Is in Wealth Management and Retail Trading; A look at the data shows where the industry’s money is being made.
Jennifer Surane, Sridhar Natarajan, and Larry R Tabb – Bloomberg
Banks have faced a challenging decade, with disruptive financial technology startups and low interest rates around the world placing pressure on many of their key businesses. But many have found ways to thrive, often by creating services to move or manage money. Here you’ll find a look at some of the areas that have seen the biggest change in the past decade, as well as a glimpse at what might come next.
/jlne.ws/37wj8yB

*****Yes, that is Larry Tabb, head of market structure for Bloomberg LLP, in the byline.~JJL

*****Money for nothing and women trade for free.~JJL

*****Here is the press release from Nasdaq that speaks to the new initiative.~JJL

*****So much for the Eurodollar options pit getting the vaccine first.~JJL

Tuesday’s Top Three
Our top story Tuesday was Salon’s New Kelly Loeffler ad claims multimillionaire knows what “it feels like waiting on that paycheck.” Second was Yahoo Life’s It Only Takes This Long to Get COVID in a Room With Someone Who Has It. Third was The New York Times’ 1918 Germany Has a Warning for America.