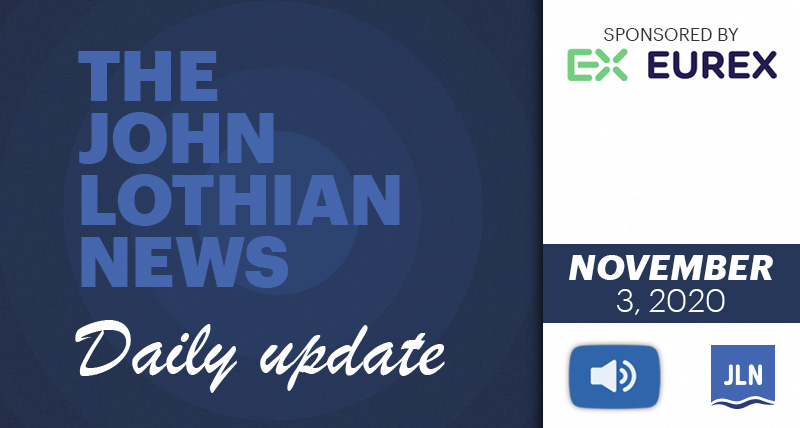 Following up on yesterday’s news that Lynne Marek had exited Crain’s Chicago Business, here is a statement from Lynne Marek about her exit from Crain’s:

“I’m not in a position to comment on my exit from Crain’s, but what I will say is that I’ve truly enjoyed covering the Chicago trading industry, way more than I expected. It’s full of bright minds and salty characters who have been a real pleasure to get to know and follow. Thank you all for keeping it lively! I’ve been a workaholic for more years than I care to think about so it’s time for a little break…but I’ll be back.”

I am sad to report that David Fisher has passed away. David was a CBOT member and former vice chairman of the exchange. He was fighting pancreatic cancer. Thank you to any of you who sent him notes, as was requested in JLN a while back.

We had no new donations to the https://jlne.ws/3oOHnjJLN MarketsWiki Education GoFundMe campaign yesterday. Please help our efforts to preserve industry history by donating to our GoFundMe campaign.

Yet another rigorous study fails to find effects from the intake of CBD! This time, Dutch and Australian researchers found that ingesting CBD does not affect the ability to drive a car. CBD is the legal, wildly popular, non-psychoactive cannabis derivative that provides miracle-like health benefits almost none of which has so far been demonstrated in clinical studies. Most research into CBD seeks to confirm its efficacy as a calming or sleep agent unaccompanied by negative side-effects. CBD has been approved by the FDA for use in calming seizures in certain kinds of epilepsy with a recommended daily dosage of 4 to 9 mg CBD per pound of bodyweight. The same Australian study did document driver impairment from THC, the psychoactive component of marijuana.~Thom Thompson

Ripple’s CEO, Brad Garlinghouse, walked back his statements about the company potentially leaving the U.S. over frustrations with regulatory uncertainty while speaking with CNN’s Julia Chatterley Wednesday. Apparently the election of Joe Biden was a major factor.~MR

During the FIA Asia-V seminar, “Are Data and Technology the New Drivers for the Business?” last night, Catherine Clay, Cboe senior vice president, global head of Information solutions, said Cboe was forming a partnership with Coinroot. We’ll pass along more information as we learn it.~JB

On Thursday, December 3, 2020 at 5:30 PM, the LaSalle Street Trading Tech Awards event will be held virtually, hosted by the most interesting event chairman, Pat Kenny of CQG. The event will include a special video message about the financial community’s impact on the Scouting movement and breakout rooms for us to congregate and socialize. Despite the pandemic, the financial community’s legacy of supporting Scouting continues. Let us gather virtually as a community and celebrate our legacy of helping develop young people in the Scouting movement.

Because the event is virtual this year, ALL are welcome to attend the event. You don’t have to be in Chicago to attend.

Join your industry colleagues, warm your heart and have some laughs.
December 3rd at 5:30 log on to:
https://tinyurl.com/TT2020LaSalle

To read the rest of this invitation, go HERE.

While the pandemic was a major economic disruptor in 2020, impacting global demand and the supply chain, the use of futures and options grew in Asia as more investors players them as hedge and arbitrage vehicles, said members of an FIA Asia-V panel devoted to change in the world of global commodities.

That process was not without its pitfalls, noted several panelists in a discussion moderated by Bill Herder, head of Asia-Pacific for the FIA, at the second day of the conference.

Glenn Seah actually said that on the FIA Asia-V panel titled The Regulatory Landscape for a New Decade when he was asked to discuss cross border issues in light of current geopolitical conditions. Seah, SGX’s Head of Legal, Compliance and Corporate Secretariat, had just said that when there is chaos, there are also opportunities for those who can react – because of either planning or luck – and adapt.

Seah’s remarks turned a little less sunny when he noted that there has been “some pullback from” appreciating the merits of globalization. Fragmenting regulation shows itself when governments withhold equivalence determinations or deny regulatory deference to foreign regulated markets. Seah said he is concerned when he sees this happening for political rather than regulatory reasons.

In his last address to the FIA as the chief executive of Hong Kong Exchanges and Clearing Ltd., Charles Li looked back at 2020 and toward a brighter future “now that we are seemingly coming out the other side of the tunnel with the vaccines coming.”

Set to retire from HKEX on December 31 after 11 years, Li will serve as a senior advisor to the exchange board for another six months into 2021. Under Li’s watch, HKEX transitioned from a regional stock exchange into a global-focused marketplace.

Businessperson of the Year 2020
Fortune
The strategic pivot Friedman embarked on at Nasdaq a few years ago is now delivering handsome returns: Leaning into fast-growing and highly profitable niches such as market indexes as well as data and analytics has helped boost Nasdaq’s earnings 73% over the past 12 months. It’s also become the go-to stock exchange for companies going public, with Nasdaq winning two-thirds of U.S. IPOs so far in 2020 (and 81% if you exclude the trendy but controversial listings of so-called SPACs, or special purpose acquisition companies). Its latest big score: Airbnb, which chose the tech-heavy exchange over the NYSE for its upcoming debut (following other new Nasdaq additions including drug price startup GoodRx and antivirus software maker McAfee). Investors in Nasdaq’s own stock have also reaped benefits, with its shares up 20% over the past year.
/jlne.ws/36yKzYZ

*****Adena Friedman continues to define what leadership is all about.~JJL

Trump backers, including Flynn, edge toward a call to ‘suspend’ Constitution to head off Biden taking office
Caitlin Dickson – Yahoo News
Even as prominent Republicans, including Mitch McConnell, began to grudgingly acknowledge that Joe Biden will be the next president, a noisy grassroots movement devoted to keeping Donald Trump in office seemed to be edging closer to advocating seizing power in what would amount to a coup d’état.
/jlne.ws/3oksd44

*****There are too many AR-15s out there to totally dismiss the risk.~JJL

Doug Collins’s Sacrilegious Attack on Raphael Warnock
Ed Kilgore – NY Magazine
When I was growing up as a Southern Baptist, there was a joke other Christians would tell about a newly deceased person being given a tour of heaven by St. Peter. The new angel was shown where certain prophets lived and was shown the road to the celestial throne, and so on. The pair then happened upon an area surrounded by a high wall. “Who’s in there?” the new resident of the hereafter asked. “Oh, that’s the Southern Baptists,” replied St. Peter. “They want to believe they’re the only people here.”
/jlne.ws/3mBqvL7

******This attack was made during a Sen. Kelly Loeffler campaign event at a gun range. This is some very difficult politics that could have larger repercussions. One needs to be careful of being a party to an attempt at excommunication for a large group of Christians in the name of politics. Discrediting people for their faith is not an American value. Tolerance of others’ beliefs is.~JJL

Drinking at bars might never recover after COVID; At least that’s the view of Gavin Hattersley, the CEO of Chicago-based brewing giant Molson Coors.
Bloomberg
The pandemic has changed the way the world drinks beer — maybe for good, according to Molson Coors Beverage Co. Chief Executive Officer Gavin Hattersley. “There’s no doubt in my mind it will take a very long time to recover to 100% of bars and restaurants, if we ever get back to that level,” Hattersley said Tuesday at an investor conference. And even when establishments do reopen, they will likely stock fewer brands, he said.
/jlne.ws/3oin8sZ

*****I am going to disagree. Having lived in Wisconsin for a time, I know how important bars are to local communities. I think they will find a way to recover. Now taverns? That is a completely different thing.~JJL

Wednesday’s Top Three
Our top story Wednesday was a repeat from Tuesday’s top three, Yahoo Life’s It Only Takes This Long to Get COVID in a Room With Someone Who Has It. Yep, it’s not long. Second was Bloomberg’s The Future of Finance Is in Wealth Management and Retail Trading. Third was Salon’s New Kelly Loeffler ad claims multimillionaire knows what “it feels like waiting on that paycheck.”