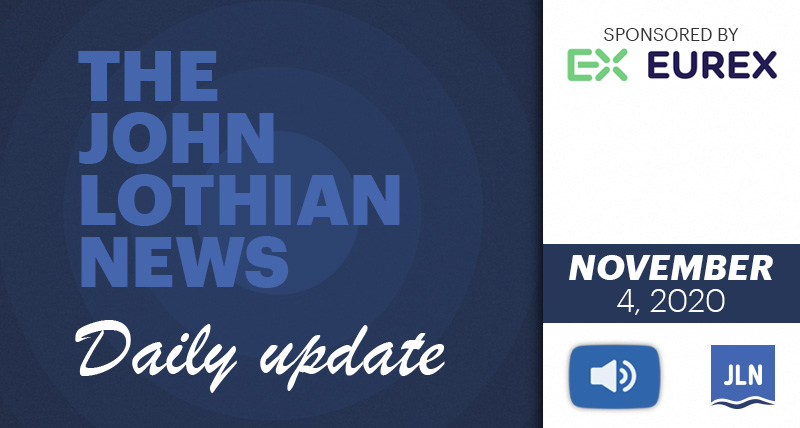 The LaSalle Street Trading Tech Awards event was a success last night. There was a nice crowd on Zoom for the presentation, which included a pre-recorded video. The event raised over $81K for the Pathway to Adventure Council of the Boy Scouts of America, and counting. Thank you to all who attended, all who contributed and to Myriam Herrera and Pat Kenny. Myriam is the Scout professional who organizes the event. This year she was also the director and producer of the video presentation. And thank you to Pat Kenny for being the most interesting chairman during a very difficult year. The event exceeded budgetary expectations from the Pathway to Adventure Council.

I want to share with you, though, how easy we have it here in Chicago versus a fundraiser in Florida that Pathway to Adventure Council Scout Executive Jeff Issac oversaw when he was the Scout Executive down there. They had a fundraiser called the Gator Grind. It was run at their Scout camp 30 minutes west of Boca Raton, FL. Runners would do a 5K run through the Scout camp, including swamps full of alligators. The camp would have some buoys and other barriers to help keep the gators away, but there was plenty of reason to run as fast as you could through the swamp. It makes our Trading Tech program look like a walk in the park.

Tim Gits has moved over to Quantitative Brokers as their chief sales officer. Deutsche Boerse recently bought a majority interest in QB. Gits was previously deputy global head of fixed income funding & financing at Eurex in Chicago. I wonder if he even has to move his desk.

Reverend Raphael Warnock and Senator Kelly Loeffler will debate each other this Sunday at 7 p.m. ET on CNN.

Thank you to Straits Financial LLC for sending me a gift basket of sausages, cheeses, mustards and crackers. They are always appreciated. To show how much I love cheese and sausage, here is a story from my college days. While at Purdue, after a trip to Jimmy Dean’s at a big mall in Lafayette to buy some cheese and sausage, I acquired the nickname, “wine and cheese John.”

Ray McKenzie was our first two time giver to the JLN MarketsWiki Education GoFundMe campaign. Then yesterday he became the first three-time giver to the campaign. Ray rocks, both figuratively and literally. His work for ALTSO is an inspiration. He is an enterprise account executive with Apple, but has had a long career in the markets, including career stops at the CME Group, ICE and Morgan Stanley. Thank you to Ray and all others who have given and all those yet to give. Help support our efforts to record industry history by donating to our GoFundMe campaign.

Have a great day and weekend and stay safe and treat people the same way you want to be treated: with respect, equality and justice.~JJL

Pages for cryptocurrency exchanges in both MarketsWiki and CryptoMarketsWiki have been refreshed to include ErisX’s new clearing authority (swaps, other commodities) and innovative price-bounded futures.~Thom Thompson

Representative Rashida Tlaib (D – Michigan) introduced a bill co-sponsored by representatives Stephen Lynch (D – Massachusetts) and Chuy Garcia (D – Illinois) requiring stablecoins to be issued by banks. Tlaib said her support for this bill came out of concern for her community falling prey to potentially predatory business practices by stablecoin issuers like Facebook’s Diem (formerly called Libra). “I feel like a mama bear, and I have to watch out for what is coming for my district and my neighborhood,” she said.~MR

There is perhaps nothing more central to trading than data. The numbers flashing across your computer screen may represent tangible products but in the end it is all reduced to a data stream. Getting the maximum benefit out of that data and the technology needed to do so were at the heart of the FIA Asia-V seminar: “Are Data and Technology the New Drivers for the Business?” (See panelist list below.)

On the face of it, one might think there’s not all that much to it. “Garbage in, garbage out” as the saying goes. But listening to the panelists speak it became apparent there is much more to it and both the possibilities and complexities can quickly get out of control.

These topics included market volatility, the new U.S. political landscape, China’s role as a competitive player in the capital markets, and a re-examination of exchange infrastructure, technology and margins.

Martin, who is head of JPMorgan’s Asia-Pacific global clearing, said global markets were prepared for volatility around the U.S. elections, but were surprised that more volatility was spurred by the prospective launch of COVID vaccines than by the election itself.

ESG (Environmental, Social and Governance) investing is a hot topic these days. The growing practice of investing in exclusively eco-friendly, socially-conscious companies is a developing industry, and from the sounds of the panelists at the FIA Asia-V panel, “Responding to Societal Issues” Wednesday, it’s still got a lot of growing to do.

The panelists said that each of their companies had seen increased demand for ESG products, especially from clients in the U.S. and Europe. Mathieu Fuhrmann, vice president of equity index sales at Eurex, said that Eurex’s clients asked the exchange to build out an ESG marketplace in the European Union beginning with benchmark ESG indices, launching ESG derivatives products later to meet customer demand. Pascal Lambert, group country head of Singapore and head of South East Asia & India at Societe Generale, said that investor appetite for ESG products has particularly increased among prime bankers and family offices over the past 18 months.

*****What would be an appropriate welcome gift? At this time of year, a nice fruitcake works for any occasion.~JJL

All the Happiness Money Can Buy in the Winter of Covid-19; Beat the pandemic blues by investing in exercise, experiences and other people’s well-being.
Sarah Green Carmichael – Bloomberg
As the saying goes, money can’t buy happiness. That certainly seems to be true in 2020 — rates of depression and anxiety are up, even though many households have more cash on hand than usual. Savings rates in the U.S. spiked to a previously unfathomable 34% in April and sat at a still-high 14% in September. Savings in the U.K. have also hit record highs, with households saving 29% of their disposable income.
/jlne.ws/3qrxSaz

*****My mother informed me and my family that she would not be giving us Christmas gifts this year. Instead, she will be contributing to some food banks that help the growing number of hungry people because of the pandemic. This is the best Christmas gift ever!~JJL

Baiju Bhatt and Vladimir Tenev, Gen Z’s Preferred Brokers; Robinhood added 3 million accounts in the first four months of 2020 as millennials and Zoomers stuck at home flocked to the stock market.
Annie Massa – Bloomberg
Since the Stanford pals founded it in 2013, Robinhood has been about lowering barriers to investing. It offered free trades before that was industry standard, along with no minimum balances and an app-focused approach that made buying shares as easy as ordering a burger on Seamless. So it was perhaps no surprise that as equity markets collapsed and then recovered, millions of newly minted traders—many with $1,200 stimulus checks— logged on. Their Jim Cramer was Dave Portnoy, founder of the irreverent Barstool Sports Inc., who livestreamed his profanity-laced trading sessions and rooted that “stocks only go up!” (Portnoy has no formal relationship with Robinhood.)
/jlne.ws/2JzZVUB

SEC Announces Office Focused on Innovation and Financial Technology
FinHub Specialized Unit to Become Stand-Alone Office
SEC
The Securities and Exchange Commission today announced that the SEC’s Strategic Hub for Innovation and Financial Technology, commonly referred to as FinHub, will become a stand-alone office. Valerie A. Szczepanik will continue to lead FinHub as its first director and will report directly to the SEC Chairman.
/jlne.ws/3qqnO1r

*****It would have really been innovative to have announced some joint office with Lab CFTC. Maybe someday. Right now we just have SEC and CFTC equivalence.~JJL

Bank of England criticised for losing track of £50bn of banknotes
Richard Partington – The Guardian
It is known throughout the world as a byword for security. But the Bank of England is evidently a tad unclear on the whereabouts of £50bn of banknotes, and it doesn’t seem to be overly concerned about it, a powerful group of MPs has said. In a stiff rebuke for Threadneedle Street, the Commons public accounts committee said the money – equivalent to a stack of £5 notes more than 800 miles high – had essentially gone “missing” because the Bank did not keep close enough tabs on cash usage in modern Britain.
/jlne.ws/33Mr2mm

*****My first reaction to this story is that the British are the absolute best when it comes to street names. ~JB

****All these numbers are going to get worse in the coming months, according to many experts. Let’s try wearing a mask, social distancing, washing our hands often and checking our temperatures. Let’s stop the spread.~JJL

CryptoMarketsWiki Coin of the Week: Bitcoin (BTC)
Bitcoin’s price hit a high of $19,834.93, beating its 2017 record in late November, leading to a surge of trading volume. Bitcoin mining revenue was $521 million in November, a 47.9 percent increase from October.
/jlne.ws/2MzYdDl