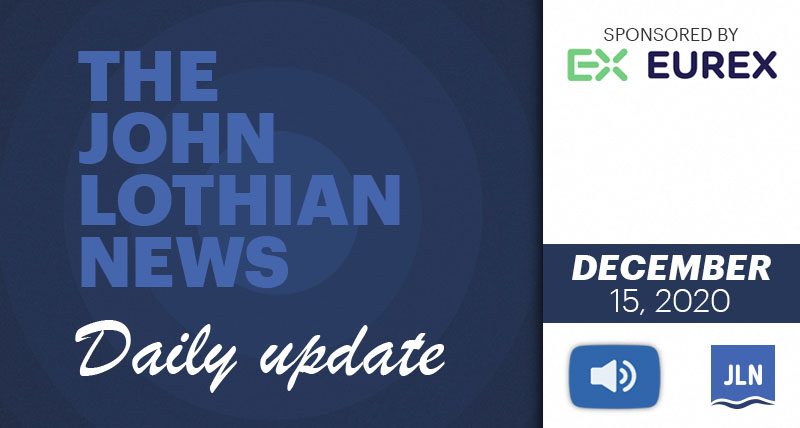 The New York restaurant “21” Club is closing indefinitely and may close for good in March, according to a report in the New York Post. The restaurant has been a New York City hot spot through the years with an unending list of celebrities who have graced its dining room. I was introduced to this fine venue by Guy Taylor, now head of media relations for BNP Paribas and have eaten there three times, including once courtesy of the World Gold Council at their annual dinner.

The SEC announced that Brett Redfearn, director of the SEC’s Division of Trading and Markets, will end his tenure as director by the end of the year after leading the division for over three years. Thank you to Mr. Redfearn for his service.

The SPIKES Volatility Index on MGEX is now available for trading. Yesterday was the first day of trading on the relaunched product.

(Borrowed from Kellie Mejdrich of Politico on Twitter) I was told the future held snow. It is just FLAKE news.

CoinRoutes is one of the latest pages on CryptoMarketsWiki to be transferred over to MarketsWiki. Speaking of which, Cboe and CoinRoutes have entered into a partnership agreement allowing Cboe to make use of CoinRoutes’ proprietary RealPrice data feed to create digital asset index products, as well as other, similar products and services.~MR

According to Bank of America and BofA Securities’s monthly Global Fund Manager Survey, the most crowded trade by far between November and December 2020 has been “long tech.” The second and third-most crowded trades, according to the participants of the survey, were “short U.S. dollar” and “long bitcoin.”~MR

While the pandemic sent chills around the globe, a close look at equity performance in 2020 shows a striking dispersion of portfolio returns that makes a case for more selective investment in international markets going forward, said analysts in a FTSE Russell webinar held Tuesday.

In addition, the expected arrival of vaccines to fight the virus “changed the market narrative in November,” said Phillip Lawler, managing director of global investment research for FTSE Russell. Most equity markets posted double-digit percentage gains, fueled by a shift into what had been some of the year’s worst-performing cyclical sectors.

A major rotation in investments from leaders to laggards on a country level was also evident in November, Lawler said, with Taiwan a stand-out example of a country that rebounded toward the end of the year. Taiwan is expected to end 2020 with positive GDP growth despite the global pandemic, benefiting from ties to the U.S. and advances in its tech prowess, analysts said.

John Lothian News interviewed Randolf Roth, Eurex’s head of equity & index derivatives and head of client services for trading & clearing, over Zoom about Eurex’s MSCI offering. The MSCI has been in the news recently as MSCI awarded HKEX a license for the complex in Asia instead of SGX, where it had been for decades. The move to HKEX opened new doors for Eurex to compete for Asian MSCI business.

Massachusetts Regulators to File Complaint Against Robinhood; The wildly popular trading platform exposed Massachusetts investors to ‘unnecessary trading risks,’ according to the complaint
Caitlin McCabe – WSJ
Massachusetts securities regulators are expected to file a complaint Wednesday against the wildly popular trading platform operated by Robinhood Financial LLC, alleging the company aggressively marketed to inexperienced investors and failed to implement controls to protect them. In a final draft of a more than 20-page administrative complaint reviewed by The Wall Street Journal, the enforcement arm of the Massachusetts Securities Division said Robinhood failed to protect its customers and their assets, violating state laws and regulations. Robinhood exposed Massachusetts investors to “unnecessary trading risks” by “falling far short of the fiduciary standard” adopted this year that requires broker-dealers to act in their clients’ best interest, the state said.
/on.wsj.com/37lVshg

****My first question as a customer would be “What risk?”~JJL

Brett W. Redfearn to Conclude Transformative Tenure as SEC Trading and Markets Director
SEC
The Securities and Exchange Commission today announced that Brett Redfearn, Director of the SEC’s Division of Trading and Markets, will conclude his tenure as Director by the end of the year after leading the Division for over three years. Since joining the SEC in October 2017, Mr. Redfearn led the Division’s 255 professional staff, including 168 attorneys, on a wide range of initiatives critical to the efficient and fair functioning of our trading markets and the protection of Main Street investors. Notably, Director Redfearn played a leading and essential role in coordinating the public and private sector efforts to maintaining fair, orderly, and efficient markets in March and April of 2020 when our markets faced unprecedented volatility and liquidity stresses.
/bit.ly/2WotuLq

Bitcoin tops $20,000, breakthrough price milestone for the largest digital asset
Daniel Roberts – Yahoo Finance
The price of bitcoin passed the $20,000 mark on Wednesday morning, a new all-time-high and the latest milestone in a huge 2020 surge that accelerated during the COVID-19 pandemic.
/yhoo.it/3gRM6wZ

*****Bitcoin exceeds $20K the day after the Cboe gets back into the game. Will Tilly take his bonus in Bitcoin is a relevant question again.~JJL

*****Was the sustainability paper edible? ~JJL