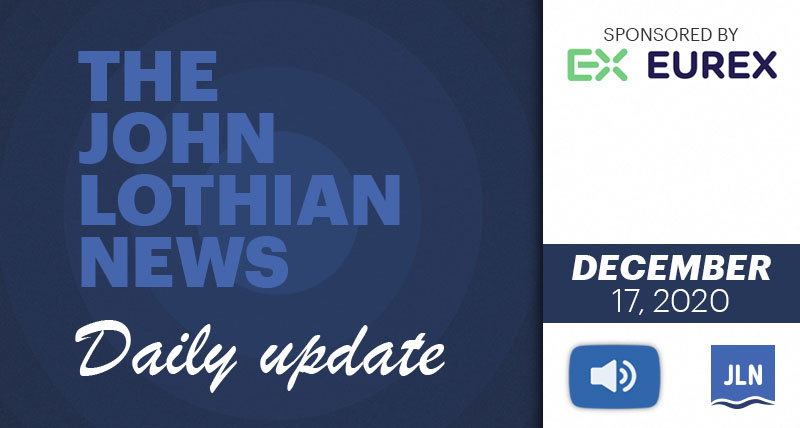 It is “How Big is your IPO Business” Day at Nasdaq and NYSE as both exchanges issued press releases (NYSE, Nasdaq) about the success of their respective IPO businesses. The NYSE makes the claim for the most IPO proceeds, while Nasdaq is close behind in proceeds, but focused on the number of IPOs. Oh, and they mentioned the number for firms that switched from NYSE to Nasdaq too.

The NFA’s latest Board Update video is out. It is produced by John Lothian Productions.

I really like the NFA’s theme music. It gives the self regulatory organization a very dynamic feel to it.

FIA has published a commentary by the FIA staff titled “Brexit end game: state of play for financial firms.”

Bloomberg said Germany reported over 45,000 cases of the coronavirus on Thursday, its biggest-ever jump in infections. Also, French President Macron has tested positive for the virus. That puts the UK’s Johnson, the U.S.’s Trump and now France’s Macron all among those who have contracted the virus.

Here is what former New Jersey Governor Chris Christie says in a national ad video about the virus: “You know, lying in isolation in the I.C.U. for seven days, I thought about how wrong I was to remove my mask at the White House. Today I think about how wrong it is to let mask wearing divide us…Please wear a mask.”

Here is the Season’s Greetings message from the London Metal Exchange. Thank you LME. They have very nice music too, not too heavy on the brass.

ADMIS is looking to hire a deputy chief compliance officer.

I don’t know about you, but all this talk of ether puts me to sleep.

Yesterday JLN held a holiday party instead of our usual editorial meeting on Wednesday afternoons. We did a round robin discussion disclosing what our outside activities and hobbies are. Patrick Lothian disclosed he and some widely dispersed friends engage in a game of “for or against” in the form of a podcast. This was a show he and these friends came up with back in 2009ish when they created Maybe Hip TV, their own internet television network. Who knew? Another employee has a koi pond in his backyard. Another one paints pictures and another paints small figurines. I disclosed that I am attempting to build birdhouses.

Bitcoin Soars Above $23,000 as More Wall Street Firms Pile In
Joanna Ossinger – Bloomberg
Largest cryptocurrency has jumped about 20% this week; Question remains whether the climb will gave way to a bust
Bitcoin breached $23,000 for the first time in history as more Wall Street names crowd into the the world’s largest digital currency up 220% this year. As momentum builds, analysts predict more gains ahead.
/bloom.bg/3muhYJ4

*****The difference this time is the greater fools have deeper pockets.~JJL

AMERIBOR Benchmark Offers Options for Bank Capital Raises
Dr. Richard Sandor – BankDirector.com
Banks that belong to the American Financial Exchange (AFX) are not waiting until 2021 to make the switch away from the troubled London Interbank Offered Rate, or LIBOR, interest rate benchmark for pricing their offerings in the capital markets.
/bit.ly/2KtZQ4U

Sweden’s king says country’s coronavirus strategy has failed; Light touch approach has left it with far higher death toll than its Nordic neighbours
Richard Milne – FT
Sweden’s king has admitted that the Scandinavian country has failed with its coronavirus strategy, which has left it with a far higher death toll from the pandemic than its Nordic neighbours. Carl XVI Gustaf told Swedes in his annual Christmas address that the country had suffered “enormously in difficult conditions” and that it was “traumatic” that many relatives of the almost 8,000 people to die with Covid-19 had not been able to say goodbye to them.
/on.ft.com/3p3RrUC

Global rich must cut their carbon footprint 97% to stave off climate change, UN says
Irina Ivanova – CBS News
This year’s economic shutdowns have done little to reduce the world’s carbon emissions. While pollution has dipped, greenhouse gases keep accumulating in the atmosphere, locking in future decades of climate disruption and extreme weather. A recent United Nations report says the so-called emissions gap — the “difference between where we are likely to be and where we need to be” on climate policy — is as big as ever.
/cbsn.ws/2IUOt5w