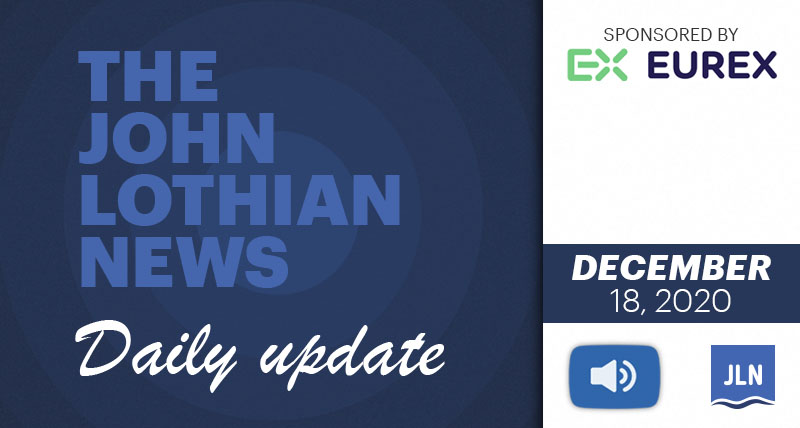 John Lothian News Readership Survey
John Lothian News is conducting a readership survey to determine key demographic information about subscribers to the John Lothian Newsletter. This helps us attract sponsors to John Lothian News and keeps the cost of JLN down. The questions we ask are quick and easy to answer. To encourage you to complete the survey, we are picking the names of three people who complete the survey and will donate $100 to the charity of their choice in their names. During this pandemic time, there are many worthy causes that are near and dear to our readers. Complete our survey and win the chance at being able to direct the $100 donations from JJLCO.

John Lothian News has hired Owen Rehling as a part-time freelance intern to work on MarketsWiki. Owen is a recent graduate of the University of Iowa with a degree in English and creative writing along with a journalism minor. He graduated with honors. Additionally, Owen is an Eagle Scout from one of my former troops. He attended the World Jamboree in Japan along with my daughter Katherine and two of my other Scouts. He also attended the National Jamboree in 2013. He was helped in attending both of those jamborees through the generous help of readers of JLN, including Sen. Kelly Loeffler of Georgia and her husband, ICE Chairman and CEO Jeff Sprecher, and also by George Hanley. Owen will be working on quality checks on content in MarketsWiki for exchange contracts to start.

In some other JLN personnel news, Mike Forrester, JLN Producer and videographer extraordinaire, has submitted his resignation and accepted a position with Gate 39 Media. We hired Mike four years ago to shoot and edit video for us in Chicago and he became an essential member of the team, traveling with JLN to London, Stockholm, Boca Raton and numerous other venues for industry conferences. Mike grew immensely as a journalist and video artist during his tenure with JLN and it was no surprise his skills and professional approach were in demand. Gate 39 Media is a JLN friend and industry communications and marketing firm. This is the second time we have lost a key employee to an industry communications and marketing firm and friend of JLN, as Spencer Doar left us to join 3PTS Communications a couple of years ago. Mike and Spencer will be working one floor apart when both companies return to working in their offices. Mike and Spencer were the JLN team members that created The Spread video series that Matt Raebel has taken over.

Mike came to JLN on the recommendation of his father, also Mike Forrester (Sr.), a 50-year member of the Chicago Board of Trade. The first time Mike interviewed with me he told me he wanted to be a Hollywood director. Reportedly, I told him he had a better chance of becoming the starting point guard on the Chicago Bulls. But what he has become is an accomplished videographer and journalist with an impressive body of work. We wish him and Gate 39 well.

One of the real pleasures of being a journalist is being able to ask questions of people on issues you are interested in. Such was the case when I reached out to Broadridge and R.J. O’Brien about their recent announcement of a major post-trade technology deal. I was able to interview Justin Llewellyn-Jones of Broadridge and Terrence Gilhooly of RJO. I have known Justin for a long time and we established trust while he worked with Fidessa, a former sponsor of JLN. I had not met Terry, but he was very familiar with me as is RJO. This deal offers the potential to break the duopoly that has existed for decades in the post trade technology sector. I wanted to know more and was able to get Justin and Terry to tell me. Check out my interview with both via Zoom HERE.

LabCFTC has released a “Digital Assets Primer.” This is updated information about emerging concepts in digital assets, which is important again because bitcoin is hitting new highs. The last time LabCFTC released something on digital currencies was a couple of months before bitcoin hit its previous all time high in 2017. Their LabCFTC’s 2017 Primer on Virtual Currencies was released on October 17, 2017.

The OCC is giving a year-end refund to its clearing member firms. Nothing like a nice Christmas present from the OCC.

FIA offered holiday greetings video to members and friends, including a Zoom box of employees and humorous message about being muted at the end.

Refinitiv Americas shared this holiday message with customers and friends.

We have new remembrances of the late George Gero from Rich Buccellato and Martin Mosbacher. Martin is a former Comex public relations executive and now president of Lansons Intermarket in New York.

For the seventh day in a row, we have not received any new contributions to our JLN MarketsWiki Education GoFundMe campaign. Please consider supporting our efforts to preserve industry history by giving to our GoFundMe campaign. If you want to know more about our campaign, watch this video or contact me.

Cboe will add another product to its arsenal in the mini derivatives war; in Q1 of 2021, Cboe plans to launch Mini Russell 2000 Index Options. A rep from Cboe said that Mini Russell options “will be structured like standard Russell options” – with the exception, of course, that contracts will be one tenth the size of standard contracts.~MR

Grayscale Investments, a digital asset investment company, now has well over $14 billion assets under management (AUM), thanks to bitcoin’s massive price spike this week. Michael Sonnenshein, managing director of Grayscale Investments, said that bitcoin hitting $20K+ per coin is “not a surprise,” and that “it is a very symbolic threshold to reach at the end of what has been a historic year for bitcoin.”~MR

U.S.-based cryptocurrency exchange Coinbase filed a “confidential” S-1 form with the SEC ahead of their potential IPO, about which they’ve been teasing to the media since the summer of 2020. For a confidential filing, a curiously large number of people seem to have heard about it already. Figures from crypto Twitter like Meltem Demirors and Anthony “Pomp” Pompliano have been tweeting about the news since yesterday afternoon.~MR

Does its recent filing with the SEC explain why Coinbase decided in late November to follow the CFTC’s March 2020 guidance and abruptly stop offering margin trading?~Thom Thompson

R.J. O’Brien (“RJO”) recently announced a major post-trade technology deal with Broadridge to supply RJO with the technology to manage post-trade flows on a global basis. The blockbuster deal gives RJO newer technology to clear its exchange traded business as well as other asset classes globally, bringing all of RJO’s operations onto the same platform for the first time.

OCC to Provide Year-End Refund for Clearing Member Firms
OCC
OCC, the world’s largest equity derivatives clearing organization, today announced that its Board of Directors has approved a refund of $156 million to be paid to clearing member firms on April 19, 2021. “As part of our ongoing efforts to strengthen OCC’s resiliency while also delivering operational excellence and efficiency, OCC’s Board of Directors approved this refund for our clearing member firms,” said John Davidson, OCC Chief Executive Officer.
/bwnews.pr/2IZn7vh

****What the OCC should have done is issued the refund in the new OCC token and given it to them in the Bakkt wallet.~JJL

LabCFTC Releases Digital Assets Primer
CFTC
The Commodity Futures Trading Commission today released a Digital Assets Primer to provide updated information to the public about emerging concepts in digital assets. The primer is part of a series issued by the CFTC’s innovation office, LabCFTC, and is the second to delve into issues surrounding digital assets.
/bit.ly/38fqUgD

*****Is the CFTC trying to put the high again in bitcoin?~JJL

Emmanuel Macron Has the Same Problem as King Louis XVI; France is going to be a critical test case for Europe’s ability to speedily immunize its population.
Lionel Laurent – Bloomberg
When King Louis XVI, his two brothers and his sister-in-law were inoculated against smallpox in 18th-century France, the public worried about the risks. Though the experiment was a success, even sparking a new type of hairstyle, the doubts never went away. As vaccines took off during the 19th century, the age of Pasteur, so did resistance, apathy and distrust.
/bloom.bg/38fHVqW

*****Yes, they have some similar problems, but Macron has more at his disposal to solve them.~JJL

London’s Camden Passage: 60 years of antiques trading; Meet the dealers who recall its pre-gentrified heyday of mods, rockers and famous clients
Peter Chapman – FT
Caroline Carrier is discreet about how long she has kept a shop in north London’s Camden Passage market. “Quite a time,” she answers in a manner which, though polite, suggests I need inquire no further.
/on.ft.com/3p48BBD

*****I love Camden Market. What a great venue to find unique treasures.~JJL

CryptoMarketsWiki Coin of the Week: Bitcoin (BTC)
Bitcoin, the world’s most popular cryptocurrency, reached new all-time highs this week, exceeding $23,000 per BTC. The previous high of $19,921 was reached in 2017, around the same time that Cboe and the CME Group announced the launch of bitcoin futures.
bit.ly/2PwV7QO

Thursday’s Top Three
Our top story Thursday was the job description for a deputy chief compliance officer at ADM Investor Services in Chicago. Second was the surprising news that Fifty Years of Tax Cuts for Rich Didn’t Trickle Down, Study Says, from Bloomberg. (The study was done by David Hope of the London School of Economics and Julian Limberg of King’s College London.) Third was, for the fourth time in the top three list, How Kelly Loeffler’s Firm Facilitated an Enron-Like Scandal, from Mother Jones.