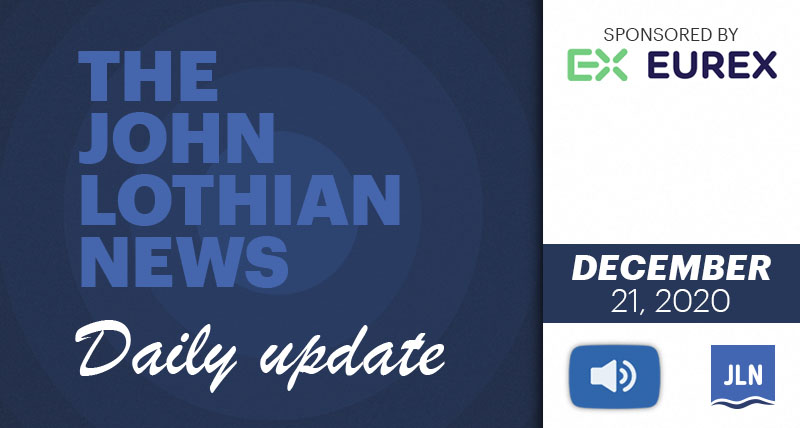 Today in JLN we have an obituary for Mark J. Powers, who was one of the founders of financial futures as an economist at the Chicago Mercantile Exchange. Mark died recently at the age of 80. Besides the CME, Mark also worked for the CFTC. His family shared the obituary and we have published it on JohnLothianNews.com.

We published an exclusive report from Joel Fingerman of Fundamental Analytics on Friday that looks at the April 17 collapse in WTI crude oil and the days leading up to it. It is a detailed analytical look at numerous quantitative measures that should have given market operators and regulators more indication something severe was about to happen in the market. Fingerman issued this exclusive report to JLN in response to the CFTC interim report about the crude market action that saw prices go substantially negative.

The Rosebowl is moving to Texas because of the ban on spectator sports in California.

Sen. Kelly Loeffler and her campaign are being criticized for a campaign ad that took a phrase Rev. Raphael Warnock said in an academic discussion out of context. Specifically, Warnock was discussing a phrase used by Rev. Jeremiah Wright, President Obama’s former church’s preacher, that was used against Obama in the 2008 Presidential election. Warnock was speaking about the “truth-telling tradition by the Black church.” Also, an open letter from more than 100 religious leaders, a coalition of African-American pastors in Georgia, criticised Loeffler for her “smear campaign” against Warnock, saying it was a broader attack on the faith traditions of black congregations. Elections are so much fun, aren’t they?

The CME Group’s Simon Raybould received his JLN hoodie that includes the message “The World Needs Journalists” and the JLN logo. Simon received the hoodie down in Australia, where he lives. So the JLN message supporting journalists may not be worldwide yet, but it is truly world down-under. 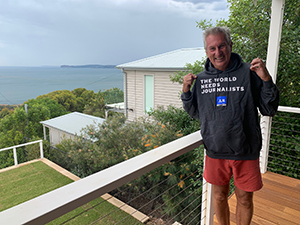 JLN is not the only organization to try to preserve industry history. Here is a radio interview from 1996 with Leo Melamed that the Capitalist Pig’s Jonathan Hoenig recorded and recently shared again on Facebook. It is a detailed interview about Leo’s early life and the CME. Did you know Leo used to sell firecrackers and male pregnancy prevention attire?

We have two new donations to the JLN MarketsWiki Education GoFundMe campaign. David Prosperi and Jorge Alergria are the latest people to give to the JLN MarketsWiki Education GoFundMe campaign. David was formerly with the OCC and was recently profiled by JLN in a video titled David Prosperi – A Career in Politics, Government, Futures Trading, Insurance and Clearinghouse Public Relations. Jorge is the former CEO of MexDer, the Mexican Derivatives Exchange and is currently working in international markets development in Latin American for the CME Group and as a senior advisor to the president CME Clearing. Thank you to David and Jorge and all who have given and all who have yet to give. Support our efforts to preserve industry history by donating to our GoFundMe campaign.

Today is the first day at JLN for intern Owen Rehling.

A Smile on FTSE Russell’s Sean Smith’s Face is Not News, But This Smile is Special
By John J. Lothian – JLN

Sean Smith has a big smile on his face these days. Actually, that is not news, though it is harder to see behind a mask. Sean is normally always smiling. However, his smile is even bigger presently because of a new product announcement by Cboe Global Markets, one of the key partners for Smith’s employer, FTSE Russell.

The Cboe announced last week plans to launch Russell 2000 mini options. This new product incorporates many of the elements of Smith’s career into one small package with huge potential. I spoke with Smith, managing director of derivatives licensing for FTSE Russell, on Friday about the new mini Russell 2000 options.

The Cboe is going to start offering Mini Russell 2000 options in the first quarter of 2021, subject to regulatory review. The contracts are worth 1/10 of the size of the index and about the same notional value as the Russell 2000 ETF options.This latest mini offering is meant to hit the sweet spot of customer demand to help them invest, trade or manage their risk with greater precision.

The Spread: That’s a Wrap
JohnLothianNews.com

John Lothian News Readership Survey
John Lothian News is conducting a readership survey to determine key demographic information about subscribers to the John Lothian Newsletter. This helps us attract sponsors to John Lothian News and keeps the cost of JLN down. The questions we ask are quick and easy to answer. To encourage you to complete the survey, we are picking the names of three people who complete the survey and will donate $100 to the charity of their choice in their names. During this pandemic time, there are many worthy causes that are near and dear to our readers. Complete our survey and win the chance at being able to direct the $100 donations from JJLCO.

CFTC Chief of Staff and Chief Operating Officer Jaime Klima to Depart Agency in January
CFTC
The Commodity Futures Trading Commission today announced that Jaime L. Klima, the CFTC’s Chief of Staff and Chief Operating Officer, will depart the agency for a role in the private sector next month. Ms. Klima has served in her executive leadership role since joining the agency in July 2019, where in addition to being the lead advisor to Chairman and Chief Executive Heath P. Tarbert on legal, policy, and administrative matters, she has been responsible for managing the daily operations of the agency and overseeing its nearly 1,000 personnel.
/bit.ly/3apP6zE

CME Group Scores 1 For St Jude This Season
Steve Eubanks – LPGA.com
When players showed up at the Ritz Carlton Golf Resort in Naples for obligatory COVID testing before the CME Group Tour Championship, they looked like road-weary travelers in the TSA line. While everyone is grateful for the sponsors, staff, volunteers and venues providing opportunities to play, a summer and fall filled with nasal swabs and temperature checks has deadened the eyes of those who traversed that gauntlet.
/bit.ly/3nEj2Ma

*****There are many good charitable venues to support and St. Judes is one of them, whether you make a hole-in-one or not.~JJL

Why Dippin’ Dots Might Have a Place in the COVID-19 Vaccine Distribution Plan
Kerry Breen – NBC Bay Area
The coronavirus vaccines are on their way, but the Pfizer-BioNTech vaccine, so far the only option that has been approved in the United States, has one complicating factor: It needs to be stored at -94 F. That’s an incredibly cold temperature, even for vaccines, and has led to concerns that even as the vaccine is distributed, many places may not have the facilities to store it. A potential answer, first reported by PopSci, comes from an unlikely source: Dippin’ Dots.
/bit.ly/3nyQ545

*****Might as well use the facilities from Dippin’ Dots, you sure can’t buy them at a sports event these days.~JJL

Friday’s Top Three
Our top story Friday was the John Lothian News Survey 2020, which allows you to be in the draw for a $100 donation to your favorite charity, as well as to help us make JLN better with your feedback. Second was JLN’s Broadridge/RJO Deal Shakes Up Post-trade Business, Gives RJO a Single Platform To Grow Its Burgeoning Global Business. Third was SEC Charges Robinhood Financial With Misleading Customers About Revenue Sources and Failing to Satisfy Duty of Best Execution, from SEC.gov.