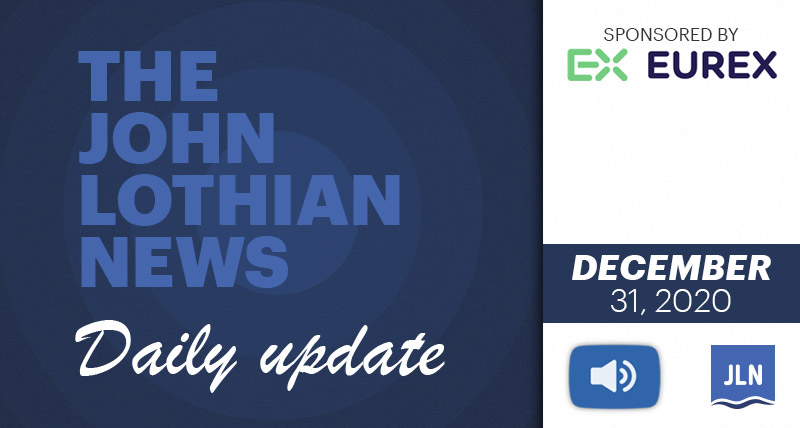 The team at John Lothian News wishes you and yours a very Happy New Year and a better 2021. This last year has been one for the history books and shall not soon be forgotten. But let us be optimistic that in the new year we can overcome this pandemic and emerge stronger for having survived the experience. We mourn those we have lost in the last year, but cherish their memories and all we learned from having them in our lives. Happy New Year!

We are still collecting answers to our readership survey. We greatly appreciate the participation we have received so far and hope to get even more to improve the accuracy of the data. We will be picking three names of people who answered the survey and shared their names and giving a donation of $100 for each to a charity of their choice. The link for the survey is above.

Refinitiv Chief Privacy Officer Vivienne Artz has been recognised in this year’s UK Queen’s new year’s honors list. She has been awarded the OBE (Order of the British Empire) for her contribution to increased gender diversity in financial services as president and CEO of Women in Banking & Finance, and as a leader and role model for gender diversity across multiple organisations and companies for many years, and for her contribution to data privacy. Congratulations to Ms. Artz on this honor.

If you have not noticed from the many appeals flooding your inbox, today is the last day of the year and the last day to make a donation to a charity that you can deduct from your 2020 taxes. There are many organizations with great needs, especially food banks trying to feed the many unemployed people impacted by the pandemic. I encourage you to increase your charitable deductions on this last day of 2020.

We had two new donations to the JLN MarketsWiki Education GoFundMe campaign yesterday. BOX Options Exchange CEO Ed Boyle contributed, as did Patrick Gardner, director of sales & product manager, automated trading at Vela. Ed is a member of the JLN Advisory Committee and a leading member of the Singing Boyle Brothers band. OK, I made up that last part about the band, but not about the brothers. Ed is a former TD Securities and NYSE Euronext executive who is a longtime fan of JLN. Patrick is a former director of sales at OptionsCity, which was acquired by Vela. He is also a hockey coach for the Chicago Jets, a pee wee and bantam level team in Chicago. Thank you to Ed and Patrick and all who have given and all who have yet to give. Support our efforts to preserve industry history by donating to our GoFundMe campaign.

I would also like to thank Dan Pritchard, who was noted yesterday as a donor. Dan gave our campaign a shout-out on LinkedIn yesterday, encouraging people to donate to our campaign. Thank you Dan.

Before former SEC Chairman Jay Clayton left his role last week, the agency tied up a few digital assets loose ends. The SEC published a statement that set forth special purpose broker dealers’ responsibilities for custodying customers’ digital securities. The commission finally took action against Ripple for not registering the coin XRP, which the SEC believes is a security. And it disapproved options exchange BOX’s plan for a blockchain settlement system for stock transactions. ~Thom Thompson

The SEC’s lawsuit against Ripple over its unregistered sale of XRP continues to have – forgive the pun – ripple effects throughout the cryptocurrency industry. Things are not going well for the company. Adding to the list of trading platforms that have announced that they are delisting XRP, Binance.US and Genesis Trading announced Wednesday that they would be delisting the digital asset. While Genesis said via email that trading was merely “suspended,” and that the company was “monitoring the evolving regulatory situation with XRP,” Binance.US announced that it would fully remove support for XRP trading on January 13, 2021, with some exceptions made for users who wish to withdraw XRP from their accounts after that time. ~MR

***** Our condolences to the family, friends and colleagues of Jean-Marc Forneri.~JJL

Operation Warp Speed at a crawl: Adequately vaccinating Americans will take 10 years at current pace; In other coronavirus news: Vice President-elect Kamala Harris got her shot; the pandemic has left many Americans “stuck in time.”
Health Workers Administer Covid-19 Vaccines At The Palace Nursing & Rehabilitation Center
Joe Murphy and Corky Siemaszko – NBC News
The Trump administration’s Covid-19 vaccine distribution program needs a major shot in the arm because at the current rate, it would take almost 10 years to inoculate enough Americans to get the pandemic under control, a jarring new NBC News analysis showed Tuesday. The goal of Operation Warp Speed, a private-public partnership led by Vice President Mike Pence to produce and deliver safe and effective Covid-19 vaccines to the public, is to ensure that 80 percent of the country’s 330.7 million people get the shots by late June.
/nbcnews.to/38Nakos

Wednesday’s Top Three
Our top story Wednesday was the Wall Street Journal’s How NYSE’s Top Salesman Fought for IPOs in 2020, about John Tuttle, the NYSE’s vice chairman and chief commercial officer. Second was HKEX CEO Charles Li’s “Goodbye, friends!” – his farewell as he retires from his 11 year post at the exchange. And people still want to know What happened to Maria Bartiromo?, as the Washington Post story was once again in our top stories at number 3.