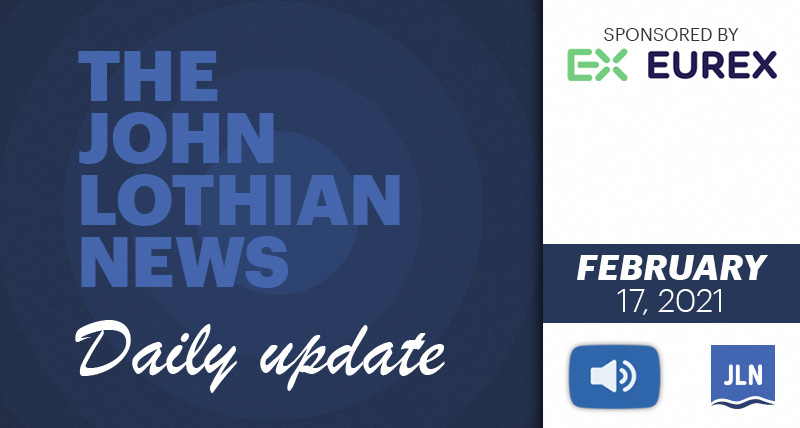 Michael Kraines is out as president of Trading Technologies and Farley Owens is in the role, TT announced in a press release. Also, Roger Mills is in as chief financial officer, Guy Scott is EVP global head of sales and Bharat Mittal is chief technology officer. So now Tim Geannopulos, the chairman and CEO of TT, has his team in place to sell the firm, or take it to the next level themselves.

The NFA wants you to know that if any Members located in the U.S. are having issues regarding filings or their operations due to recent winter storms or other severe weather issues, you can contact NFA’s Information Center by calling 312-781-1410 or 800-621-3570 or emailing information@nfa.futures.org.

At least 21 people have died from the extreme cold hitting the southern U.S., the New York Post reported.

Today’s lesson is to say something nice about someone and good things can happen. I called Harlan Ten Pas “revered” here in JLN and presto.

The revered Harlan Ten Pas is the latest to give to the JLN MarketsWiki Education GoFundMe campaign. Harlan is a veteran lawyer and CPA who was my business accountant when I first started John J. Lothian & Company, Inc. He never charged me a dime for the work he did and he shared his years of Scouting wisdom with me during each of our yearly meetings. Several years ago, Harlan suffered a heart attack and a stroke the same week. He is now retired from RSM, but is remembered well by all who worked with him or were clients of his. He was the inspiration for the Harlan (Ten Pas) Award given to Scouts who earn five merit badges in the Trading Tech merit badge workshop program I created with the Pathway to Adventure Council. He is an inspiration to all. Thank you to Harlan and all who have given and all who have yet to give. Support our efforts to preserve industry history by donating to our GoFundMe campaign.

A favorite Harlan story. One time a client of his was called in to the IRS about their return. The return was only half signed by Harlan, with only his first name. He had evidently been interrupted when signing the return and did not complete it. When asked about the form the customer noticed the half signature. The customer started to say something about it and the IRS agent said, “No worries, we know who Harlan is.”

In a bid to attract retail investors who tend to trade smaller-sized orders, Cboe Global Markets Tuesday said it plans to activate its electronic crossing auction functionality, known as AIM, for orders of up to 10 S&P 500 index options (SPX) and S&P 500 Index Weeklys options (SPXW) contracts traded on Cboe Options Exchange, which is Cboe’s largest options pit. Worth noting: Options order size has been trending smaller over the past year and currently more than 30 percent of the volume in SPX options trades in orders of between one to 20 contracts. Arianne Criqui, Cboe’s head of derivatives and global client services, said in a statement that the AIM function will complement open outcry during regular trading hours. It’s slated to begin Monday, February 22. More details here. ~SC

PanXchange, refusing to be bullied by other entities in the industrial hemp space, is announcing this morning that it has kicked off a crowdfunding campaign to help pay legal costs as it is harassed by New Leaf Data Services and New Leaf Capital Partners for using the term “benchmarks” in its monthly “PanXchange® Hemp: Benchmarks and Analysis.” New Leaf claims that its own use of “hempbenchmarks.com” in 2016 is infringed by the title of the PanXchange report. You can read more about the crowdfunding campaign here.
~Thom Thompson

Trading Technologies Appoints New President, Chief Financial Officer, EVP Global Head of Sales and Chief Technology Officer; New executive appointments further strengthen company for continued global growth and expansion
Trading Technologies
Trading Technologies International, Inc. (TT), a global provider of high-performance professional trading software, infrastructure and data solutions, today announced the promotion of four executive leaders in the organization. Farley Owens is now President, Roger Mills is Chief Financial Officer, Guy Scott is EVP Global Head of Sales and Bharat Mittal is Chief Technology Officer. “Farley, Roger, Guy and Bharat are long-standing leaders who have proven themselves to our customers, shareholders and employees. In their new roles, they will continue to bring keen domain expertise and experience as we forge ahead with our goals of growth and expansion.” As President, Farley Owens will oversee the day-to-day operations of the company, specifically driving the execution of the company’s objectives to fuel growth. Previously, he served as Head of Product Marketing and EVP Product Management and Marketing.
/bwnews.pr/3bi2X9E

*****Now former TT President Michael Kraines has left TT for another opportunity. Tim G has his team together without the former investment banker.~JJL

New Momentum for Ameribor Benchmark Follows Citi’s Market-Making Move; Regional banks look to gain a hedging tool in the Libor transition as dealers eye an opportunity
John Hintze – GARP
Citi’s decision to join the American Financial Exchange (AFX) and make markets in Ameribor-based derivatives brought the upstart exchange long-sought affirmation from a major Wall Street player. More are likely to follow, bolstering this U.S. alternative to the Libor benchmark, though it may not result in a quick ramp-up in Ameribor usage.
/bit.ly/3aqyZBb

*****There are lots of smiling faces over at the AFX.~JJL

Vaccinating the world is a test of our ability to co-operate; It is also a trial of our enlightened self-interest and will need G20 leadership to succeed
Martin Wolf – FT
Is it possible to tackle a global pandemic in a world marked by huge inequalities of wealth and power? The answer might tell us how the world will address the far more complex challenge of climate change. What we have learnt from Covid-19, so far, is that the world has shown more co-operation than many might have expected. Even so, given that we are all in this together, it has not been enough.
/on.ft.com/37nqK79

*****We have defeated evil before. We can do it again.~JJL

Robert Glauber Probed Causes of 1987 Stock-Market Crash; Harvard professor, who has died at age 81, also helped craft S&L bailout as Treasury official
James R. Hagerty – WSJ
Robert R. Glauber, a Harvard professor who investigated the causes of the 1987 stock-market crash and helped shape federal legislation bailing out the savings-and-loan industry, died Sunday at his home in Brookline, Mass. He was 81 and had been diagnosed with pancreatic cancer last year.
/on.wsj.com/3asPrRG

*****Condolences to his family, friends and colleagues.~JJL

At 93, She Waged War on JPMorgan—and Her Own Grandsons; Beverley Schottenstein said two grandsons who managed her money at JPMorgan forged documents, ran up commissions with inappropriate trading and made her miss tens of millions of dollars in gains. So she decided to teach them all a lesson.
Tom Schoenberg – Bloomberg
Beverley Schottenstein was 93 years old when she decided to go to war with the biggest bank in the U.S. It was a June day, and the Atlantic shimmered beyond the balcony of her Florida condominium. Beverley studied an independent review of her accounts as family and lawyers gathered around a table and listened in by phone. The document confirmed her worst fears: Her two financial advisers at JPMorgan Chase & Co., who oversaw more than $80 million for her, had run up big commissions putting her money in risky investments they weren’t telling her about. It was the latest red flag about the bankers. There had been missing account statements. Document shredding. Unexplained credit-card charges.
/bloom.bg/2ZlU5dQ

Tuesday’s Top Three
Our top story Tuesday was the link to registration for DePaul University’s Arditti Center for Risk Management’s Annual Risk Conference, which takes place virtually on February 23. John Lothian is the moderator of the first panel. Second was Bloomberg’s How Extreme Cold Turned Into a U.S. Energy Crisis. Third was the Wall Street Journal’s Goldman Sachs to Offer Its Investing Know-How to the Masses.