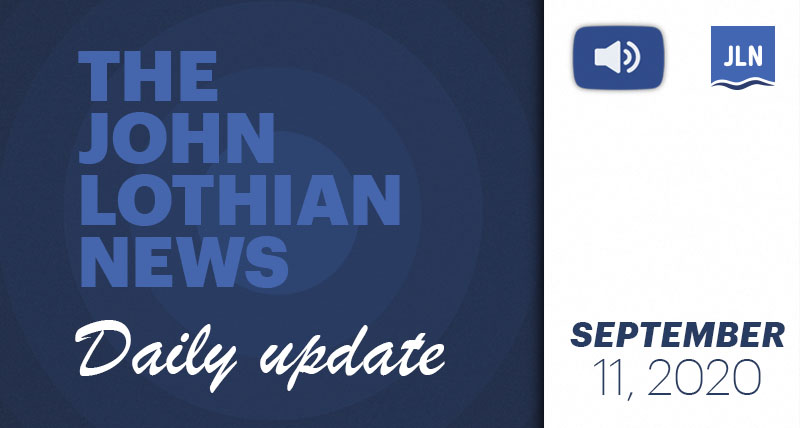 Forty-two 9/11 survivors have passed away from COVID-19. Maybe more.

Dr. Anthony Fauci says U.S. needs to ‘hunker down’ for fall and winter. I am hunkering. I hope when I am done hunkering, I will be a hunk.

The Reformed Broker, Joshua M Brown, has a new podcast, “Why Markets Crash in the Fall.”

Bloomberg reports that suicides among U.S. kids and young adults jumped 57% in the past decade. Thom Lant posted a moving comment on Facebook about depression and suicide. I love Thom Lant. Show your love for everyone as you don’t know for whom that expression of love and compassion could mean the difference between life and death.

Phil Mackintosh of Nasdaq has a commentary titled “What Everyone Should Know About the Stock Market.”

Have a great day and stay safe and treat people the same way you want to be treated.

On 9/11/2001, I was ten years old. I remember waiting for the school bus the morning that the tragedy in New York happened, completely unaware of what was going on. I went through the whole school day not knowing – I didn’t find out until I went home that day. Years later, I feel weird about it; I kind of wish someone had told us what was happening, even though we were kids.~MR

The CFTC did some light lifting yesterday when it published its Division of Enforcement’s guidelines for “evaluating compliance programs in connection with enforcement matters.” The three-page memo provides a framework for Division staff in considering whether the target of an enforcement action has a compliance program reasonably designed to prevent, detect and remediate misconduct. Such factors are to be weighed when penalties are assessed by the Division in an enforcement action. As footnote 2 in the memo says, the 390 words of the guidelines are not binding on anyone but the Division staff. Just for the record: the text of the CFTC’s press release is 470 words. ~Thom Thompson

Members Exchange (MEMEX) on Thursday announced its inaugural fee structure with no pricing tiers or charges for market data or connectivity. In a release, the exchange said members will pay 25 cents per 100 shares to remove liquidity. Those who add liquidity will be rebated 29 cents per 100 shares for displayed volume and 20 cents per 100 shares for non-displayed volume, with pricing subject to filing with the SEC. MEMX plans to launch trading in seven stock symbols (ACST, BB, ED, F-B, GOOG, ICSH, and XOM) on September 21 and begin trading all NMS symbols September 29. The complete fee schedule for MEMX’s launch can be found here. ~SC

The Path to Electronic Trading was inspired by the success of the Open Outcry Traders HIstory Project. Gerry Corcoran, the CEO of RJO O’Brien, came to JLN to tell the story of how his one day of working on the trading floor helped create the path to electronic trading as RJO and other firms applied technology to improve the efficiency of a futures pit busting at the seams with paper orders.

His story inspired us to develop this new video series that will capture the individual stories of the people and firms that embraced technology and created the evolutionary path from the shouting of orders on the trading floor to trading all forms of derivatives, securities and other products via purely electronic means.

To read the rest of this announcement, go here.

Gerry Corcoran’s One Day of Working on the CBOT Trading Floor Started A Path to Electronic Trading
JohnLothianNews.com

R.J. O’Brien CEO Gerry Corcoran spent just one day working on the trading floor, during the drought of the summer of 1988. He was a new CFO for the brokerage firm and it was an all hands on deck day due to a severe drought that was causing huge volatility on the grain floor of the Chicago Board of Trade, where RJO had a lot of farmer hedging business.

Revisiting Milton Friedman’s Critique of Stakeholderism; The Nobel laureate economist argued that CEOs and boards should focus on maximizing shareholder value, not stakeholder value.
Peter Coy – Bloomberg
Exactly 50 years ago, economist Milton Friedman argued that corporate boards should focus on maximizing shareholder value and not get wrapped up in trying to achieve other objectives. The conventional wisdom in boardrooms today seems to be that Friedman was wrong. In fact, though, a lot of what he wrote was spot on. Sadly, the current emphasis on “stakeholder value” is one part enlightenment, one part public relations, and one part an attempt by corporate directors to get a freer hand to run companies as they personally see fit.
/bloom.bg/3bLKGBL

A Free Market Manifesto That Changed the World, Reconsidered; Milton Friedman’s libertarian economics influenced presidents and inspired “greed is good.” So what did Friedman get right — and wrong? Today’s business leaders and economists weigh in.
Andrew Ross Sorkin – NY Times
Sept. 13 is the 50th anniversary of a seminal moment in the world of business: the publication of Milton Friedman’s essay in The New York Times Magazine entitled “The Social Responsibility of Business Is to Increase Its Profits.”
/nyti.ms/3hjqYhJ

*****Milton Friedman should be re-examined.~JJL

A new front in coronavirus disinformation: Wall Street research
Cristina Alesci and Casey Tolan – CNN
Coronavirus misinformation is infecting the unlikeliest of places: Wall Street research that investors rely on to trade in the financial markets. In an early August note to clients, an analyst at a research firm called Fundstrat Global Advisors, which distributes widely-read reports and analysis to investors, cited a series of tweets by an ophthalmologist named James Todaro who painted a rosy picture of the US population’s potential for developing herd immunity to coronavirus
/cnn.it/35v6yjo

*****Misinformation is one of the biggest problems of this age.~MR

CryptoMarketsWiki Coin of the Week: XRP
XRP, a digital asset created by Ripple, has been (and continues to be) used in multiple giveaway scams based on YouTube. The scams involve users creating videos that use Ripple’s logos and the likeness of its CEO, Brad Garlinghouse. Ripple sued the video platform in April, alleging the platform’s “willful blindness” of such scams led to their proliferation on YouTube. YouTube filed a motion in July to dismiss these allegations, which Ripple recently contested.
bit.ly/2xj0NDV

Thursday’s Top Three
Our top story Thursday was the Financial Times’ ED&F Man agrees debt restructuring in eleventh-hour rescue. Second was John Lothian’s commentary on David Downey’s colorful 2018 letter to the CFTC, David Downey Knows Security Futures Like No One Else. Third was the Wall Street Journal’s How Travel Will Change Post-Pandemic: 10 Expert Predictions. (“Even luggage” might change!)