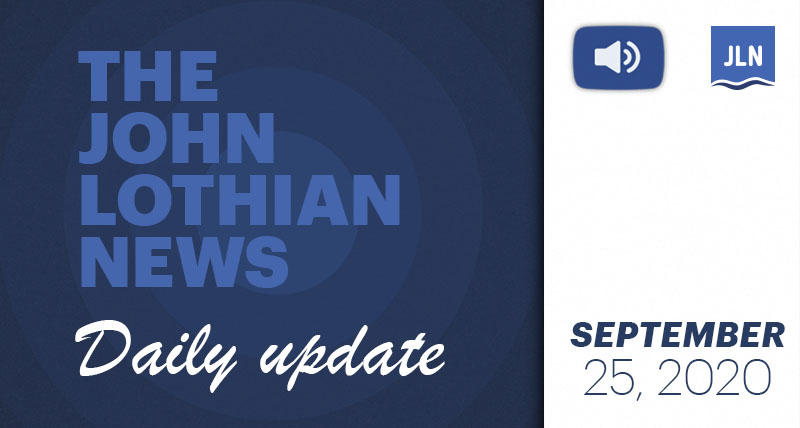 The Financial Times says investors are anticipating a Joe Biden win in the upcoming U.S. Presidential election. The Kremlin is increasingly alarmed about the prospect of a Biden win, according to a Bloomberg story. And Facebook took down networks linked to Russian disinformation, the New York Times reported, making the Kremlin’s efforts to influence the U.S. election more difficult.

However, the U.K.’s richest person, Jim Ratcliffe, has surfaced as a Monaco resident, Bloomberg reported, just to add more mystery to the Brexit debate.

Lynne Marek of Crain’s Chicago Business is reporting that the CME is making some changes to its overnight trading rules and settlement times for equity-linked products to better suit traders also active in related stock markets. The E-Mini S&P close, and similar products, will be 3:00 PM, not 3:15 as it has been forever.

And Reuters says a key milestone for scrapping Libor is delayed until January.

Your Kelly Loeffler news of the day is that U.S. Representative Matt Gaetz of Florida has accused Republican Senator Kelly Loeffler of bribing President Donald Trump with $50 million to push out her rival, Rep. Doug Collins. Loeffler is in a “jungle election” with Republicans and Democrats and it seems anything goes. This is all according to reporting by Matthew Chapman of Salon.

tZERO has appointed former Nasdaq EVP John Jacobs to its board of directors.

Also, Jeanine Hightower-Sellitto was named CEO of Atomyze LLC. Atomyze LLC (Atomyze) is the US arm of a global fintech platform that aims to digitize and modernize trading markets for products, assets and commodities.

Have a great day and weekend and stay safe and treat people the same way you want to be treated: with respect, equality and justice.~JJL

From the FIA: Registration is open for Expo-V, which will take place virtually November 10-12 from 7:30 a.m. CST to 2:00 p.m. CST. Expo-V focuses on shaping what’s next in the cleared derivatives industry as it continues to move forward and change, and will include keynote addresses, one-on-one interviews with exchange leaders, the Innovators Pavilion and virtual trade show and more. It is $100 for FIA Members and $150 for Non-Members. You can go here to register. ~SR

Are markets in a bubble because traders live in one? Lack of diversity among investment managers contributes to groupthink
Dominique Mielle – FT
Recent equity price falls are raising concerns that the US stock market, propped up by a herd of bulls detached from economic reality, has been in a bubble. The definition of a bubble — a cut-off world isolated from diverse interaction or plurality of views — reminded me of the market professionals I encountered in 20 years as a hedge fund investor. I met exactly one other female partner. Most investment teams look like male Ivy League rowing crews. If the stock market is in a bubble, it is because traders live in one.
/on.ft.com/2G9YTwi

*****I am not sure about the bubble thing, but I always want to bet the house when trading.~JJL

The next financial crisis may be coming soon; Fears of a credit crunch have already hit business confidence and worried banks
Gillian Tett – FT
What probability do you give that there might be a new financial crisis? This month, the number crunchers at Oxford Economics, a research group, asked 162 global businesses this question. Their average answer was 20 per cent over the next two years. That is twice as high as the perceived risk of a second global wave of the Covid-19 pandemic and also, sadly, the probability of an early effective vaccine arriving.
/on.ft.com/3cuyANC

*****We are in a financial crisis. A financial crisis is not just when the banks have trouble. It is also when people have trouble. And lots of people are having financial issues because of unemployment and shifts in the way the world is operating due to the pandemic. Maybe we need to redefine what a “Financial Crisis” is.~JJL

Remember 1929 when looking for the cause of the coming financial crisis; Alarm bells are ringing in the market for commercial mortgage-backed securities
John Dizard – FT
It has not yet been recognised that Ruth Bader Ginsburg’s death significantly raises the likelihood of a US-centric financial crisis this fall. The continued forbearance by lenders and bond trustees, the rule-waiving, and the explicit belief in further fiscal stimulus have all depended on the assumption that Congress would be open to any negotiations between the parties. But the possibility of any agreement has been damaged by fury among Democrats at President Donald Trump’s insistence that RBG’s successor must be appointed before the election.
/on.ft.com/2RZ6sIY

******The soup lines should be a dead giveaway, or perhaps the minivans lined up at the food pantries.~JJL

Investors anticipate Joe Biden election win; Study by Survation suggests Donald Trump victory could jolt stocks higher
Colby Smith – FT
The majority of investors think Joe Biden will clinch the presidency from incumbent Donald Trump, according to a new survey of money managers in charge of $3tn of US assets. The survey by UK pollster Survation found that 60 per cent of 91 investment professionals polled in September, most based in the US, believe Mr Biden will win the upcoming matchup slated for November 3. That result is broadly expected to be negative for US equities, and potentially also for the dollar, depending on how the two main parties perform in Congressional elections at the same time.
/on.ft.com/2S095ug

*****Winning this election will give new meaning to “winning.”~JJL

Matt Gaetz accuses GOP’s Kelly Loeffler of bribing Trump with $50 million to push out her rival
Matthew Chapman – Salon
On Thursday, The Daily Beast reported that Rep. Matt Gaetz (R-FL) is accusing Sen. Kelly Loeffler (R-GA) of offering President Donald Trump money for his re-election in return for helping her push opponent Rep. Doug Collins (R-GA) out of the race. “This is what the Loeffler team went to the Trump team with,” said Gaetz at a campaign event for Collins. “They went and said, ‘Look, you guys gotta get Doug Collins out of this race’ . . . She said, ‘I have $50 million for this project, and I can either spend my $50 million getting new voters and helping the Trump campaign, or I can spend that $50 million taking out Doug Collins.’”
/yhoo.it/2RW9sWq

*****Fifty million dollars could do a lot of good in the world.~JJL

CryptoMarketsWiki Coin of the Week: DAI
On March 12-13 Maker, the protocol that creates DAI stablecoins, failed to adjust the price of Ethereum (ETH), a major component of the protocol’s borrowing system, following an ETH crash. This resulted in a significant disruption of the Maker protocol, causing a large number of its users to lose $8.33 million worth of DAI through mass liquidations (DAI is pegged to the value of USD). On Tuesday, September 22, Maker’s governing community voted not to compensate these users for their losses.
/bit.ly/32YTYYj

Thursday’s Top Three
Our top story Thursday was Bloomberg’s JPMorgan Is Set to Pay $1 Billion in Record Spoofing Penalty. Second was the CME Group’s Notice of Disciplinary Action against Cargill for violating CBOT rules involving the Soft Red Winter Wheat market. Third was Bloomberg’s How an Amazon Bribery Scheme Became a $100 Million Swindle. If you shop on Amazon, this affects you. So that means everyone.