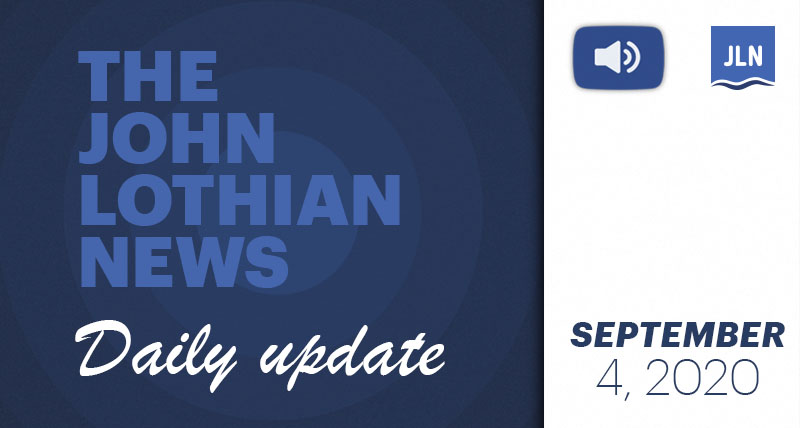 Monday is Labor Day in the U.S. and we will not be publishing an edition of JLN then. We will resume on Tuesday. Have a peaceful long weekend and reflect on our world and how you can help make it better. We all need to work harder to be loving, respectful of each other and do our best to solve some of the many problems we currently face collectively.

Wall Street had its worst performing day in months yesterday. See here and stories below.

The Wall Street Journal reported that the Hilton Hotel in Times Square in New York City is closing. The hotel “will lay off 200 workers, the latest sign that New York City’s hospitality industry is struggling to survive during the coronavirus pandemic.”

Intercontinental Exchange announced Thursday that its CFO, Scott Hill, and Ellie Mae COO Joe Tyrrell will present at the Barclays Global Financial Services Conference on Tuesday, September 15 at 11:15 am ET. The presentation will be available live and in replay via webcast and can be accessed in the investor relations and media section of ICE’s website here.~SR

From the OCC: Thursday’s market activity resulted in a new record of 7,111,658 trades cleared at OCC, and the fourth highest contract volume day of 45,884,033 cleared contracts.~SR

Social-equity applicants for Illinois’ new adult-use cannabis dispensing licenses were notified Thursday if they made the next round. The Illinois Department of Financial and Professional Regulation confirmed that 75 licenses will be awarded in a lottery held by IDFPR in late September. The state agency said every applicant that advanced received a perfect score in an independent evaluation of their application and also was a social equity applicant. The list is here.~SC

*****This appears to be a reversal of the treatment of net option value (“NOV”) at the clearinghouse. Back on May 22, the CME announced they planned on changing the treatment of NOV from a gross basis across all customer accounts at an FCM to net across each customer. This would result in the CME being able to see on an account basis where the option risk is at the brokerage firm. According to an FCM executive, this would have greatly increased the amount of money the FCMs had to put up at the CME clearinghouse and reduced their profitability. From the exchange perspective, they would have greater transparency into where issues were at firms. The FCMs protested the May 22 memo, which caused the CME to freeze the NOV level at a 10% haircut. The May 22 memo had this moving from 10% to 100% by the end of June. Now, the 10% haircut seems to have been removed. If you have some insights to share on this move from the CME, on or off the record, I am glad to hear from you.~JJL

Trump: Americans Who Died in War Are ‘Losers’ and ‘Suckers’; The president has repeatedly disparaged the intelligence of service members, and asked that wounded veterans be kept out of military parades, multiple sources tell The Atlantic.
Jeffrey Goldberg – The Atlantic
When President Donald Trump canceled a visit to the Aisne-Marne American Cemetery near Paris in 2018, he blamed rain for the last-minute decision, saying that “the helicopter couldn’t fly” and that the Secret Service wouldn’t drive him there. Neither claim was true.
/jlne.ws/351yefL

****President Trump has denied saying Americans who died in war are “losers” and “suckers,” but the Associated Press has confirmed The Atlantic’s story.~JJL

‘The United States is in crisis’: Report tracks thousands of summer protests, most nonviolent
Tim Craig – Washington Post
About 93 percent of the racial-justice protests that swept the United States this summer remained peaceful and nondestructive, according to a report released Thursday, with the violence and property damage that has dominated political discourse constituting only a minute portion of the thousands of demonstrations that followed the killing of George Floyd in May.
/jlne.ws/356QDb0

*****There is a statistic for you. Ninety-three percent of protests this summer have been peaceful. We are peaceful people, not violent people. The protest I participated in this summer was peaceful.~JJL

CryptoMarketsWiki Coin of the Week: YFI
YFI, short for yEarn.finance token, garnered attention when the price of this latest DeFI wunderkind shot past bitcoin’s historic high price of just under $20,000 to trade at more than $38,000 last weekend, less than two months since it was launched. The token is the governance token for the y.finance ecosystem, which so far consists of a decentralized trading platform and an automated market maker. The token not only conveys governance rights but also provides a share of the potential earnings borrowing and lending operations conducted on the yEarn.finance blockchain.

Thursday’s Top Three
Our top story Thursday was HBO’s new sex cult doc has big lessons for investors, from Fortune. Hmmm. The “doc” refers to HBO’s new documentary series “The Vow” about NXIVM, the supposed ‘executive success program’ that was actually a multi-level marketing scheme. Readers stared at their screens long enough to make the Wall Street Journal’s How to Stop Eye Strain When You Relentlessly Stare at Screens our number two story. Third was If 60/40 Keeps Working, Democracy Has Failed, Paul McCulley Says, from Bloomberg.