The VIX Is Ready to Spike. That’s Bad News for Stocks; Stocks on tenterhooks as U.S. recession signs build 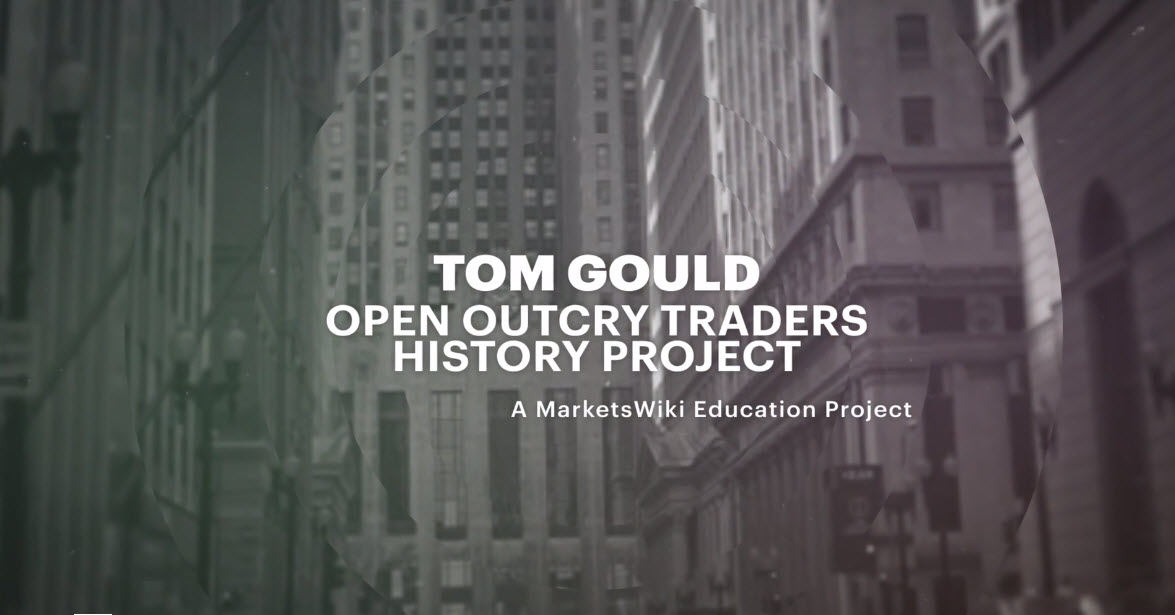 Tom Gould is a former option trader at the Chicago Board Options Exchange. He went on to a brokerage and compliance career. He tells his story about his days trading on the floor of the CBOE to John Lothian News as part of the MarketsWiki Education Open Outcry Traders History Project.

The VIX Is Ready to Spike. That’s Bad News for Stocks.
Andrew Addison – Barron’s
The markets so-called fear gauge could be ready to surge higher—and that would be bad news for an already reeling stock market.
The Cboe Volatility Index, or VIX as it is more commonly known, has begun a potentially explosive advance. If my analysis is correct and the VIX surges dramatically, then it would project a dramatic increase in volatility. And usually we have seen that a sharply rising VIX has accompanied declining stock prices.
/jlne.ws/2Md9fuG

Stocks on tenterhooks as U.S. recession signs build
Chuck Mikolajczak – Reuters
A wake-up call from the U.S. heartland has spooked Wall Street by raising fears of a recession that will push equities into a correction.
After Tuesday’s dire picture on manufacturing from the Institute for Supply Management (ISM), which rattled the market, investors await Thursday’s ISM services report and Friday’s employment report to confirm or quash recession worries.
/jlne.ws/2pAlZUD

****JB: Bonus points for use of the word “tenterhooks”.

This Time It’s Different as Stock Traders Were Prepared for Rout
Michael Msika – Bloomberg
The sharp sell-off in European stocks over the past two days may seem to echo those in May and August, but there’s one significant difference. This time, traders were ready. Options contracts show market operators built protection against losses during the September rally.
The put-call ratio on the Euro Stoxx 50 had reached a peak of 3.4 on Sept. 24. And the 10-day moving average of the ratio was at its highest since October 2018.
/jlne.ws/2Mfg3Ii

Dow, S&P 500 mark worst start to a quarter since 2008 financial crisis as recession fears accelerate
Mark DeCambre – MarketWatch
U.S. equity markets on Wednesday were ensnared in a two-day tailspin that has pushed the benchmark indexes to one of the worst starts to a quarter since the 2008-09 financial crisis.
The Dow Jones Industrial Average was down more than 500 points, or 1.9%, at 26,078, with a two-session skid of more than 3%, representing the worst start to a quarter since the last three months of 2008, when the Dow slumped 19.4% in the fourth quarter, according to Dow Jones Market Data.
/jlne.ws/2LM5MEJ

U.S. Stock Drop Leading Global Equities Lower Is Troubling
Robert Burgess – Bloomberg
The global stock market fell for a second straight day Wednesday, posting its biggest back-to-back loss since early August. Why this is happening is well known: The outlook for the worldwide economy is getting worse. But what’s really worrisome is that suddenly the declines are being led by U.S. equities.
/jlne.ws/2oO6Xdq

The SEC says it’s making ETFs more accessible—what that could mean
Lizzy Gurdus – CNBC
SEC has a new status quo for ETFs.
The Securities and Exchange Commission has adopted a new rule meant to “modernize regulation of exchange-traded funds” in an attempt to facilitate more competition and innovation, provide investors with more choice and give ETFs a speedier path to the public market. The rule will also require issuers to publish their daily portfolio holdings.
/jlne.ws/2Il2Hcv

Tradebot Systems: There’s Still Room Under the Radar
Alphacution
In late 2001, $1.1 million in member contributed capital is dropped into Northtown Trading, LLC. By 2005, this operation becomes Tradebot Systems, Inc. and the rest has become a notable component of high-frequency trading history – and mythology. In comparison to much of our other modeling, we don’t know much about Tradebot. However, given the contextual evidence provided by that other modeling, we can leverage the data we do have on Tradebot much further than we’d otherwise be able to.
/jlne.ws/32YVmXP

In With the New: Rules for Implementing New Technologies for Market Infrastructure
TABB Forum
While today’s financial infrastructure is highly resilient, the future beckons. Financial market infrastructures must begin the journey today to tomorrow’s infrastructure, which inevitably will leverage innovative technology. But there must be a rational basis behind the use of new technology. DTCC’s Mark Wetjen looks at the key considerations and challenges.
/jlne.ws/2Oi3rmk

Wall Street is starting to take the possibility of an Elizabeth Warren presidency seriously — and strategists warn a victory could crush certain parts of the market
Ben Winck – Markets Insider
Sen. Elizabeth Warren has seen a steady surge in the polls for the 2020 Democratic primary, and market analysts analysts are looking into how a Warren administration would affect the economy.
Warren is “rightfully considered a front-runner” and is “within striking distance” of winning the nomination and White House, Raymond James strategists Ed Mills and Chris Meekins wrote in a Monday note. President Trump is still likely to win reelection “by a hair,” they added, but “investors are not appropriately weighting the likelihood of a Warren presidency.”
/jlne.ws/31VugAI

****JB: That title…hyperbole much? I am neither for nor against Warren but I have seen more than a few Chicken Little pundits predicting doomsday if she gets elected. She is nowhere near that scary.

Goldman Sachs and the Long Arc of Hull Trading
Paul Rowady – LinkedIn
Strap yourself in for this one, as we take a fascinating and detailed walk through some of Alphacution’s recent modeling on one of the long-standing Kings of Wall Street; a story that is, on the one hand, not widely known and on the other, not typically spoken of…
It was among the most exciting one-two punches of financial markets deals from the late 1990’s and very early 2000’s; one where Wall Street – much like other financial centers across Europe had done in prior years – had reached out, once again, to LaSalle Street for their unique prowess in derivatives trading.
/jlne.ws/2VeWSmi