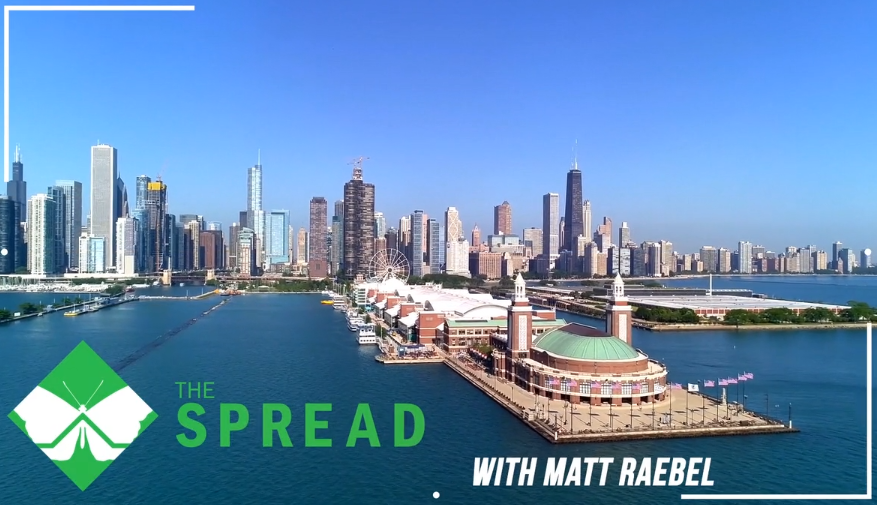 October is a scary month, what with Halloween, the fear gauge jumping up and down, and a “Murder” of drones attacking Saudi Aramco. This week’s edition of The Spread will help you face your fears. Or not.

U.S. Federal Bankruptcy Court Judge Janet Baer converted Bcause’s long six-month long Chapter 11 bankruptcy proceeding into a Chapter 7 bankruptcy under which the company will be liquidated. The U.S. Trustee has been asked to assign a trustee to oversee the liquidation.

Tiny $217 Options Trade on Bitcoin Blockchain Could Be Wall Street’s Death Knell
Brad Keoun – Coindesk
The cryptocurrency industry isn’t replacing Wall Street just yet. But inventors and entrepreneurs are working on it, with some initial success, albeit modest.
In this case, an option premium of 0.0202 bitcoin ($217 at the time) paid via a smart contract may have just become the proof of concept.
bit.ly/2VoDoeL

****JB: I wouldn’t run for cover just yet. The title is clickbait but still an interesting read.

The Elizabeth Warren stock-market correction will happen sooner than you think: RBC
Chris Matthews – MarketWatch
Investors won’t wait until Election Day to voice their displeasure at higher taxes and stricter regulations being proposed by Democratic nominees for President.
That’s because the contours of the 2020 presidential election will come into sharp focus by the end of the first quarter of next year, Lori Calvasina, head of U.S. equity strategy at RBC Capital Markets wrote in a research note Monday, arguing that markets will likely react to potential policy implementation long before general-election ballots are cast.
/on.mktw.net/30VlX6M

Hedge Funds Post the Best Performance This Year Since 2013
Vincent Bielski – Bloomberg
Hedge funds are kicking into a higher gear.
They gained 4.9% on average in the first three quarters of 2019, the best performance in this span since 2013, according to a report Monday from Hedge Fund Research. Equity strategies are leading the gains, followed by event-driven on an asset-weighted basis.
/bloom.bg/35iwegU

Hong Kong Stock Exchange Drops Nearly $37 Billion Bid for London Rival; In walking away, HKEX clears the way for LSE to conclude its plan to acquire financial-information and terminal company Refinitiv
Steven Russolillo and Ben Dummett – WSJ
Hong Kong’s stock exchange pulled a $36.6 billion bid for its London rival, a deal that would have united two major trading hubs even as both are clouded in political turmoil.
/on.wsj.com/2VpsLZk

One U.S. Regulator Is Trying to Speed Up Libor’s Demise
Alexandra Scaggs – Barron’s
U.S. regulators have enlisted an important ally in their campaign to retire Libor.
Global regulators want financial markets to stop using the London Interbank Offered Rate, or Libor, because a manipulation scandal and changes in market structure have hurt its viability. In the U.S., the Federal Reserve has formed an industry committee that is planning to facilitate the switch to a replacement rate by the end of 2020.
bit.ly/2MpsNw1

Exploring the uses of AI and machine learning technology in operational risk
Saqib Jamshed – OCC
What, for you, are the benefits of attending a conference like the ‘Operational Risk Management Congress’ and what can attendees expect to learn from your session? You get to interact with your peers and learn from their experiences. There is also an opportunity to engage with the regulators in a more informal setting and you can get a sense of what items they deem more important presently. The vendors also provide an opportunity to provide information about how their technology solutions can potentially help you in some of the issues you face at work.
bit.ly/31YMIIK

Longtime Morgan Stanley prime brokerage exec to retire
Lawrence Delevingne – Reuters
Alex Ehrlich, co-head of the prime brokerage business at Morgan Stanley (MS.N), plans to retire at the end of 2019, according to an internal memo seen by Reuters and confirmed by a spokesman.
Ben Walker, who also co-heads the business, will become the sole chief of the unit, the Oct. 7 memo said.
/reut.rs/2OuemJZ

A Stock-Option Strategy for Extra Income
Steven M. Sears – Barron’s
The thirst for yield in a world awash in low interest rates is leading investors to the options market—and that’s a great place to be.
They are increasingly embracing the cash-secured put sale strategy to create returns that generally far exceed what is available in the bond market. To create returns that can exceed 3% on their cash, these investors are increasingly selling puts on blue-chip stocks that pay dividends to create and enhance returns.
bit.ly/2LXM88Q

Veteran Investors Lay Out Options for Long-Term Investments
Min Jeong Lee – Bloomberg
Investing for short-term returns this year might sometimes have seemed like an exercise in anticipating U.S. President Donald Trump’s next tweet. But some market players have still reserved time for ideas that go beyond the next headline on trade or manufacturing PMI. The following are comments on long-term strategies from a number of veteran investors.
/bloom.bg/2LUFMaa

Meet the Banks Behind $5.5 Trillion of Trades That Power ETFs
Rachel Evans – Bloomberg
The world’s biggest banks still play a surprisingly large role in the rapidly growing market for exchange-traded funds.
Bank of America Corp., Goldman Sachs Group Inc. and ABN Amro Bank NV together handle about half of the $5.5 trillion gross flows into and out of ETFs, according to a new report from BlackRock Inc., which analyzed the first batch of regulatory filings on the institutions that create or redeem ETF shares. That’s in stark contrast to the secondary market, where many banks have ceded market-making roles to faster, more tech-savvy electronic brokers.
/bloom.bg/31ZcOeG

‘Free’ Trading Has Arrived. Be Sure to Read the Fine Print.
Daisy Maxey – Barron’s
Stock brokerage commissions appear to be on the brink of extinction, but investors should be aware of hidden costs and pitfalls that can come with “free” trading. The latest salvos in the race to zero began Tuesday when Charles Schwab said it would eliminate commissions on online trades of stocks, exchange-traded funds and options. Rival discount brokers TD Ameritrade Holding and E*Trade Financial quickly followed suit with matching cuts.
bit.ly/33hA6gq