Traders Rush to Stock-Options Bets on Tesla and Amazon

On November 18, 2021 at 12 p.m. EST, IBKR Webinars is holding an event about the career of Cboe’s Catherine Clay titled “Making Her Mark: Catherine Clay, Leading with Ambition in Global Data & Analytics.” 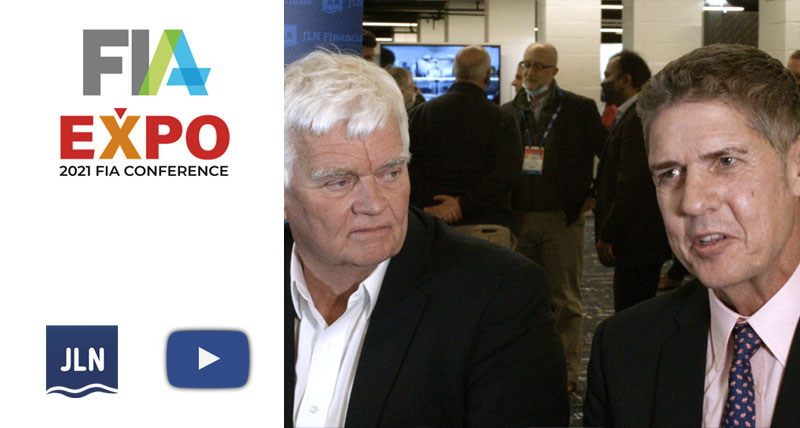 It was nearly a week after Trading Technologies announced it would be acquired by the private equity firm 7RIDGE, along with its limited partners Cboe Global Markets, Inc. and the Singapore Exchange, but the company’s top executives were still celebrating.

Traders Rush to Stock-Options Bets on Tesla and Amazon; With equities near records, many traders have been using options to wager on a continued advance in tech companies
Gunjan Banerji – WSJ
Stock-options activity is hitting a fever pitch, with many traders rushing to bullish bets to profit from a continued advance in everything from technology heavyweights to small companies. Bullish call-options volumes last week hit the highest level since January, when activity touched a record, Cboe Global Markets data show. These contracts give traders the right, but not the obligation, to buy shares of companies at specific prices, by a stated date.
/on.wsj.com/3FboXRe

The Weekly Fix: Everyone’s Worried About Inflation; OldManRepo
Katherine Greifeld – Bloomberg
Bank executives are worried, billionaires are worried. The U.S. consumer has never been this worried. Bond traders, in particular, are worried. And this week, those fears were realized: U.S. inflation hit a 6.2% annual rate in October, the hottest since 1990.
Those numbers landed just hours before the Treasury Department auctioned off $25 billion of 30-year bonds — which ended up being extremely sloppy. The sale tailed by the most in a decade, prompting 30-year rates to spike by as much as 14 basis points.
/bloom.bg/3natv3T

Wall Street stocks shake off inflation concerns
Naomi Rovnick – Financial Times
Wall Street stocks edged higher on Friday as investors looked past inflation concerns that have knocked short-term US government bonds to focus on strong corporate earnings.
The broad-based S&P 500 share index added 0.1 per cent in early dealings, on track to end the week less than 1 per cent lower after hitting a series of record highs this month. Sentiment was also lifted by Johnson & Johnson, the world’s largest healthcare group, announcing a spin-off of its consumer business.
/on.ft.com/3CmWQg9

Hedge funds learn the hard way in bonds shock
Katie Martin – Financial Times
Few will shed a tear for the travails of the Mayfair set, and nor should they. Of late, many macro hedge fund managers who seek to make money out of big economic and monetary shifts have had what can politely be described as a complete nightmare.
To the immense amusement of online meme creators, some of the most prestigious funds in the business bet big on the global interest rate outlook and lost, bigly. Adding insult to injury, the damage stemmed largely from rinky-dink UK government bonds — a crucial pillar of the British financial system but not exactly the glamorous end of the global debt market.
/on.ft.com/3kvBreC

Dow fights to reclaim perch at 36,000 with stock market set for weekly loss on inflation anxieties
Mark DeCambre and Steve Goldstein – MarketWatch
U.S. stock indexes climbed Friday, with the Dow enjoying a bump from enthusiasm about a breakup of blue-chip component Johnson & Johnson JNJ, 1.66%.
Stocks have been buffeted by inflation fears, with the government debt yields rising and equity indexes set to post weekly losses, but overall investors are betting that corporate profits will remain healthy despite supply-chain challenges and a surge in consumer demand in the aftermath of the COVID-19 pandemic.
/on.mktw.net/3Dax7IM

Around-the-clock currency market may be in for greater volatility as inflation concerns reverberate, economist says
Vivien Lou Chen – MarketWatch
The roughly $6.6 trillion-a-day, around-the-clock currency market may be in for a taste of the volatility that’s gripped bond markets over the past few weeks from the U.S. and Canada to the U.K. and Australia.
That’s the view of Jonas Goltermann, a senior markets economist at Capital Economics in London, who sees such a scenario unfolding in the next three to six months. He points out that currency traders have remained surprisingly calm in the face of mounting evidence that higher inflation is turning persistent and there is lingering uncertainty about how central banks will respond to it.
/on.mktw.net/3kxB6rE

Nasdaq launches options on the OMX Stockholm 30 ESG Index; New options align with Nasdaq’s objective to address the increasing demand for more sustainable investment solutions.
Wesley Bray – The Trade
Nasdaq has launched options contracts on the OMX Stockholm 30 ESG index, as it looks to expand its ESG derivatives offering. Nasdaq’s suite now includes both options and futures contracts based on the ESG benchmark index, which since its launch in June 2018, has grown into one of the most traded indexes in Europe.
/bit.ly/3Hir07C

SEC Chair Gary Gensler Is Out of Step With Hedge Fund Investors
Aaron Brown – Bloomberg
Securities and Exchange Commission Chair Gary Gensler gave a speech this week to the Institutional Limited Partners Association, a lobby group of hedge fund investors, and it seemed out of step with both the history of investment fund regulation and the needs of hedge fund investors today. It started with the standard paean to New Deal financial regulation that omits the most important point vis-a-vis hedge funds, which is that private funds were created to avoid the problems that legislation caused.
/bloom.bg/30ihgdd

Here are the top 10 most-traded stocks among retail investors this year, according to Nasdaq
Natasha Dailey – Markets Insider
It’s been well-known since January when GameStop shares surged to eye-watering highs: Retail traders are making their mark on the stock markets.
A new asset class called “meme stocks” has emerged with names like GameStop, AMC and BlackBerry topping the list. But new data from Nasdaq’s Retail Trading Activity Tracker, which launched Thursday, shows what stocks have really grabbed retail traders’ attention.
Here’s the list of the top 10 stocks, according to Nasdaq.
/bit.ly/2YEEGsb

In the Market We Have Volume, and We Have Noise
We’ve got a soup of puts, calls, inverse ETFs, double-levered ETFs, even SPACs. But let’s zero in on volume, and what it can tell us right now.
Helene Meisler – Real Money
It used to be there were stocks and they traded in eighths and quarters. Then we had options-puts and calls that expired monthly. And futures on stock indexes, which expired quarterly.
Then stocks started trading in decimals. And options began trading weekly. And we added exchange-traded funds. Now you can’t just know a group in the market, you have to know which ETF expresses it best. If that weren’t enough, you can “short” the market by buying an ETF, inverse ETFs we call them.
/bit.ly/3qBmc7w

Even JPMorgan Can’t Escape All the Job Quitters; It’s not just lower-wage workers leaving their positions for better pay. Wall Street traders are on the move, too, in a sign the labor market is tightening.
Brian Chappatta – Bloomberg
It’s not quite Wall Street’s version of the “Great Resignation” — but it’s not too far off, either. JPMorgan Chase & Co.’s equity derivatives desk has faced a wave of defections this year, part of a growing trend across the financial industry, Bloomberg News’s Hannah Levitt reports. Unlike many Americans leaving their jobs, JPMorgan’s senior executives had positions lined up at rival powerhouses like Bank of America Corp., Citigroup Inc. and Millennium Management. But, like workers in other industries, bankers are increasingly basing their career decisions on more than just money. After more than a year of the Covid-19 pandemic, flexible lifestyles are in demand.
/bloom.bg/3okX8yR