CFA Institute And FINRA Foundation Study Debunks Common Myths About Millennials And Investing
FINRA
Conventional wisdom paints a picture of millennials as aggressive, knowledgeable, and confident when it comes to investing, but a new research study sponsored by CFA Institute and the FINRA Investor Education Foundation debunks common assumptions about millennial investors. The research, titled “Uncertain Futures: 7 Myths About Millennials and Investing,” explores the attitudes and behaviors of millennials when it comes to finances and investing.
/goo.gl/4x1yXL

****SD: Great study. Love this debunking as I never ever have heard any of my millennial cohorts express their love of robo-advisors. “Reality: Despite their affinity for technology, 58% of millennials prefer to work face to face with a financial professional, on par with Baby Boomers (60%) and Gen Xers (58%). Only 16% of millennials show strong interest in using robo-advisors.”

ALTSO’s Rocktoberfest: The Financial Industry Rocks to Provide Prosthetic Limbs for Children in the Developing World
PRWeb
Leg To Stand On (ALTSO) has a new slogan: “Mobility is More than Movement.”
This slogan succinctly defines the mission of the non-profit who provides free prosthetic limbs, orthotic devices, appropriately fitted wheelchairs, and rehabilitative care to children in the developing world who live with untreated limb disabilities because they cannot afford treatment.
/jlne.ws/2NkuTM9

****Rocktoberfest is next Thursday, October 11, and we have a deal for you. Enter the promo code “Lothian” when purchasing tickets and you’ll get three tickets for the price of two. (Scroll to the bottom of the linked page to purchase tickets.) This year’s event will take up the whole of City Winery and feature an acoustic stage in addition to the mainstage – both firsts for Rocktoberfest in Chicago!~SD

One of Traders’ Worst Friday Fears Realized as VIX Curve Inverts
Luke Kawa – Bloomberg (SUBSCRIPTION)
The scariest Halloween costume imaginable pales in comparison to a Friday inversion of the VIX futures curve.
A severe sell-off in technology stocks has pushed the front-month VIX futures contract to a premium relative to the second-month contract.
/jlne.ws/2NoPmj5

****SD: Check out the backwardation for yourself here. The curve is already reverting to a more normal contango as we speak.

****SD: The 10-yr yield is at its highest since 2011. And recall the story we had yesterday from the WSJ about people hedging their high-yield credit exposure and pulling money from the top junk bond ETF.

Exchange Executive Says SEC Trading Experiment Will Cost Investors ‘Millions’
Dave Michaels – WSJ (SUBSCRIPTION)
Stripping stock exchanges of the ability to offer incentives to lure trading will cost investors “millions of dollars,” according to one of the largest U.S. market operators.
The remarks on Thursday by Chris Concannon, president and chief operating officer of Cboe Global Markets Inc., add to the growing fight between stock-market operators and their regulator, the Securities and Exchange Commission. The SEC has proposed a two-year pilot program that exchanges say would undermine a key leg of their strategies: a widely used pricing system in which exchanges pay rebates to attract orders and charge fees to other traders.
/jlne.ws/2NndEtT

Volatility Risk Premia Strategies in an Era of Uncertainty
Damian Leach, Head of Systematic, Fulcrum Asset Management
The attractive, insurance-like dynamics of volatility risk premia (VRP) strategies are relatively well known: positive returns are generally earned during stable and falling volatility regimes, but a proportion of these gains can be given back on unexpected volatility spikes, especially when they arise from low levels. In well-structured strategies, these gains then tend to be recouped relatively quickly, allowing returns to continue to compound.
/goo.gl/5mSvwj

****SD: A look at some of today’s market activity. Via SocGen – “Just eight months after short positions on the VIX suddenly blew up in February … short volatility trades are just a shade off their historical highs. Similarly, net long positions on the S&P 500 look uncomfortably high (SG target for end-2019 stands at 2,200, implying a 30% drop in the S&P).” For a look at today’s job report, see the WSJ. 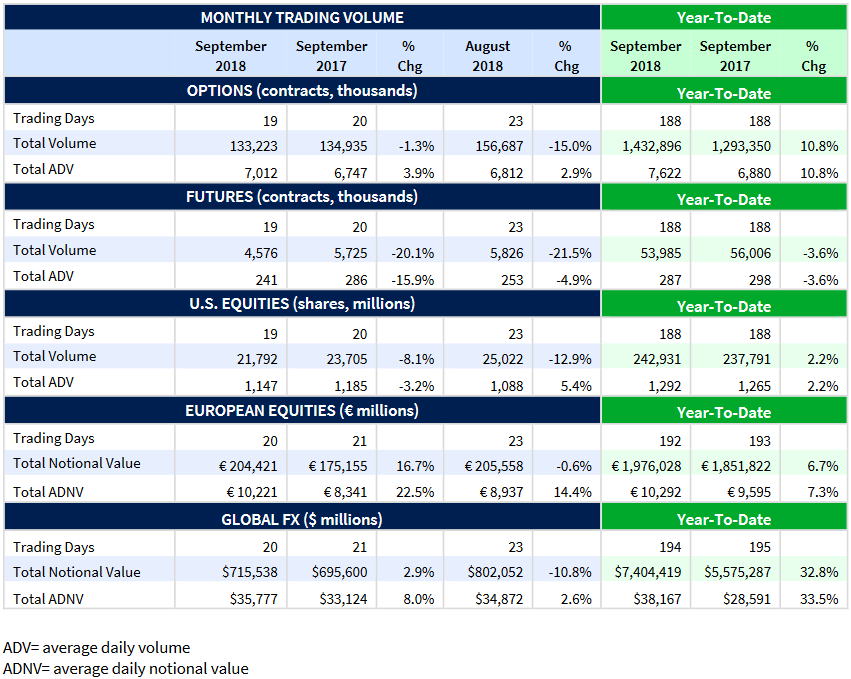 (Click the image for the full report and a larger image)

****SD: The youngest options exchange has nearly 10 percent of the market. MIAX’s market share is down a smidge from last month’s report, but check out the year-to-date comparison of 2017 to 2018 – up 75.2 percent. Just tremendous.

Battle lines drawn for London Metal Exchange
Andy Home – Reuters
The great and the good of the global metals industry are descending on London, making their annual pilgrimage to the London Metal Exchange’s LME Week jamboree. They do so because the 141-year-old market sets the world’s reference prices for everything from aluminium to zinc. And away from the many seminars and cocktail parties, metal producers, traders and users will meet behind closed doors to hammer out details of next year’s contracts.
/goo.gl/LPrQ5w

HKEX Monthly Market Highlights
Press Release
The average daily turnover of futures and options for the first nine months of 2018 was 1,197,645 contracts, an increase of 45 per cent when compared with the 823,469 contracts for the same period last year.
/jlne.ws/2OIvYSI

****SD: This touches on the CME’s plan for clearing OTC FX options.

****SD: Here’s the PDF of the ISDA paper referenced.

No-deal Brexit has big implications for Europe’s derivatives market
John Dizard yesterday – Financial Times (SUBSCRIPTION)
Britain and the rest of Europe have this week been forced to face the reality of a what a no-deal Brexit would mean for the essential plumbing of the financial world.
LCH UK, which operates the London-based derivatives clearing house for interest rate swaps, let its EU members know that they could be given just three months to move GBP38tn in notional value of swaps contracts to other venues.
/jlne.ws/2QBe9Td

Elon Musk Mocks SEC, Calls for Short-Selling to Be Made Illegal
Dana Hull and Benjamin Bain – BloombergQuint
Elon Musk insulted the Securities and Exchange Commission days after settling a fraud lawsuit with the U.S. agency, potentially imperiling a deal that allows him to remain Tesla Inc.’s chief executive officer.
/goo.gl/Un1kns

EU Is Working ‘Day and Night’ to Get a November Brexit Deal
Dara Doyle, Boris Groendahl and Charlie Devereux – BloombergQuint
European and U.K. officials struck an upbeat tone on Friday about the prospect of getting a Brexit deal in the next few weeks, as European Commission President Jean-Claude Juncker said negotiators were working “day and night” to clinch it.
/jlne.ws/2NqPi26

Brokers Expect 48% of Clients to Ask for Custom Order Handling Logic in 2019
John D’Antona – Traders News
Market consultancy Greenwich Associates just released a report showing that buy-side traders are demanding more than ever from their brokers as they dissect sources of underperformance to improve their trading strategies. The report, “Evolution of Equities Sell-Side Execution Technology,” examines how buy-side traders now have complex analysis showing the specific mechanics of order routing that work best and want to address these routing options.
/jlne.ws/2Nq2LYj

****SD: PDF of the study available to download here.

Shorting Volatility for Fun and Profit
Gunjan Banerji – Barron’s
The so-called short volatility trade is back with a vengeance.
Investors soured on the popular trade—which is a bet against volatility—after a surge in turbulence in February left investors across Wall Street and Main Street with sharp losses. But the trade is rearing its head again as major U.S. stock indexes breach fresh highs.
/jlne.ws/2NqJMws

Short Sellers Feast on Hong Kong Stocks as China Investors Brace
Sofia Horta e Costa – Bloomberg
Hong Kong’s stock market has barely ever been this bearish.
Short-selling turnover soared to almost 18 percent of the total value of shares traded in the city Thursday, exchange data compiled by Bloomberg show. Such dominance has only been once in the past 20 years, in May 2016. The Hang Seng Index fell 0.2 percent Friday to cap its worst weekly rout since early February, when a U.S. volatility spike sent shockwaves across global markets.
/jlne.ws/2NpURhf

Are transportation stocks the market’s canary in a coal mine?
Stephen Culp – Reuters
The U.S. transportation sector, which many see as a proxy indicator of the economy’s health, has retreated 2.3 percent from its Sept. 14 record, hinting to some analysts that the longest bull market on record has entered its late stages.
/jlne.ws/2NqnZFo

JPMorgan strategist urges investors to stay bullish even as stocks log worst day in months
Sue Chang – MarketWatch
Stocks plunged and volatility spiked Thursday as a jump in U.S. Treasury yields spooked investors. But a seasoned market strategist maintained his bullish view on equities even as trading in the market at times took on signs of panic sales.
“We still recommend investors to be overall overweight equities vs bonds. The current selloff in bonds is helping this trade cushioning the decline in equities,” said Nikolaos Panigirtzoglou, a strategist at JPMorgan Chase & Co.’s London office.
/jlne.ws/2NpTGOR

VXX And Why Following VIX Futures Term Structure Contango Signals Might Fail
Brent Osachoff – Seeking Alpha
One of the most commonly repeated strategy ideas I hear for investing in volatility ETPs such as the iPath S&P 500 VIX Short-Term Futures ETN (VXX) is to base trade decisions on the shape of the VIX futures term structure, sometimes just referred to as “the VIX board.” You’ll see this reckless advice posted everywhere, in blogs, on Twitter, and in YouTube videos. Let me explain why it’s potentially dangerous.
/jlne.ws/2NqVJSP

Jobs Storm: Hurricane Seems To Blow Down Growth, But Still A Lot To Like
JJ Kinahan – TD Ameritrade
The old adage about not judging a book by its cover probably applies to Friday’s September payrolls report. Though the headline jobs growth number slid dramatically, there may be enough creamy filling inside to paint a relatively positive picture about the economy.
/jlne.ws/2QtuZmP

Low-Volatility Stocks Are Acting Differently This Year. Blame the Rate Hikes
Evie Liu – Barron’s
When the S&P 500 plunged 10% in January, investors who held “low-volatility” stocks expected reasonably that they’d fare much better than the overall market. They were profoundly disappointed. The S&P 500 Low Volatility Index tumbled 9% in the two weeks after the market peak on Jan. 26, barely better than the overall market.
/jlne.ws/2Nsj5b3

‘Was he high?’: Elon Musk is back to complaining about short-sellers on Twitter, but his gripes don’t hold water with some investors (TSLA)
Graham Rapier – Markets Insider
One week after settling with the Securities and Exchange Commission and agreeing to more oversight from Tesla’s board about his communications, Tesla CEO Elon Musk was back to his usual Twitter antics.
In a series of tweets fired out Thursday, the billionaire berated not only short-sellers — those investors betting against Tesla’s stock — but also stockholders for lending out their shares to be shorted. Short-sellers borrow a company’s shares and then sell them, with the aim of buying them back at a lower price and returning them, pocketing the difference.
/jlne.ws/2NmItyM